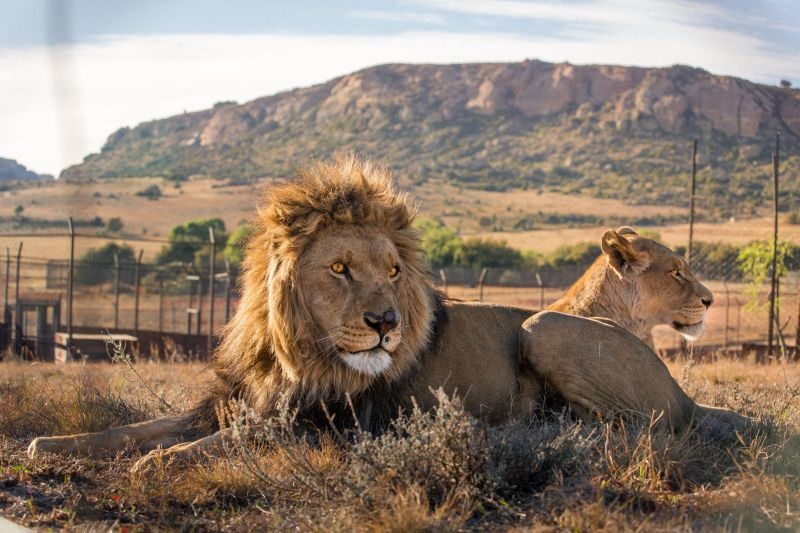 Micca and Juba, the two lions who have been relocated to a sanctuary following a veld fire. (Supplied)

Two young lions are the new kings of a Free State sanctuary after a fire destroyed enclosures where they were held in captivity, the Four Paws organisation said on Sunday.

"We hope to give these beautiful animals a new lifelong home here at Lionsrock – safe from private keeping, breeding and the canned hunting industry," said the organisation's country director Fiona Miles.

She said that the animals had been born at a local breeding farm and then sold to a farmer to be used as a security measure.

The owner then sold the land and while he was deciding what to do with his lions, a veld fire broke out burning down the enclosures.

"The lions, though scorched, had no other serious injuries," she said.

"Lions do not belong in private captivity and are certainly not meant to act as security guards," added Miles.

She said that Lionsrock Big Cat Sanctuary in Bethlehem where the lions are now based would provide an appropriate environment for their species.

In contrast, she cited how approximately 1 000 lions were killed in the country for canned hunting

Furthermore, she said that more than 8 000 lions were at any one time in captivity at more than 260 breeding facilities.
"Education is the most powerful weapon which you can use to change the world." Nelson Mandela
The desire for equality must never exceed the demands of knowledge
Top
1 post • Page 1 of 1