Discussions on all angling matters
4 posts • Page 1 of 1

The 2018 Sardine Run is in full swing on South Africa's Eastern Cape and KwaZulu-Natal coasts.

Adding to its appeal is the rather phenomenal sardine run - with 2018 being especially busy after a few rather dismal years, according to KwaZulu-Natal Sharks Board's Mike Anderson-Reade.

“We haven’t witnessed this for ages. It’s a spectacle to see with hundreds of sharks following the shoals,” he says.

According to the North Coast Courier, fishermen have been averaging about 500 crates of sardines per net. The biggest net saw some 1 000 crated filled on Sunday 18 June.

The Natal Sharks Board has also warned swimmers that sharks are far more active closer to the beaches, as a result of the Sardine Run.

The bulk of South Africa's sardine stock is found in the cooler Cape waters, but each winter a small proportion moves eastwards up the Wild Coast. These shoals take advantage of a narrow band of cool water that occurs seasonally between the coast and the warm, southward flowing Agulhas Current.

While no specific comparisons on previous years were immediately available, Anderson-Reade says, “I’ve been in the business for over 40 years, and I can tell you that it’s a truly exceptional and phenomenal year."

“These little fish have been ducking and diving for many years, but if you visit this year, there's a good chance you could witness this exciting phenomenon,” says Philip Schalkwyk, General Manager of the Dream Hotels and Resorts 'Blue Marlin Hotel in Scottburgh.

Schalkwyk explains there are many theories for the decline of the Sardine run on the South Coast over the past few years. Changes in the currents, over-fishing, and climate change have all been identified as possible factors.

“However, the anticipation continues to build each year between the months of June and August, when batches of sardines pass through our area, and the bird and whale action becomes quite exciting,” he says.


During the sardine migration along the Wild Coast of South Africa, millions of sardines are preyed upon by marine predators such as dolphins, marine birds, sharks, whales, penguins, sailfishes, and sea lions. The hunt begins with common dolphins that have developed special hunting techniques to create and drive bait balls to the surface. In recent years, probably due to overfishing and climate change, the annual sardine run has become more and more unpredictable. It took me two weeks to have the opportunity to witness and capture this marine predation. Greg Lecoeur/2016 National Geographic Nature Photographer of the Year

If you're planning on experiencing the 2018 Sardine Run keep the following tips in mind:

Be sure to book your accommodation in advance, as many fishing enthusiasts typically flock to the KZN coastline around this time.
If you’re looking to do some diving, be sure to book in advance through a reputable dive centre with experienced PADI instructors.
The winter months also mark the arrival of humpback whales. Although unrelated to the run, the whale and dolphin encounters should provide ample distraction while you wait for the sardine action to kick-off.
Bathers need to be cautious as shark nets are typically removed from most beaches, and swimming is prohibited during this time.

The best spots to see the Sardine Run:

All of a sardine, it's that time again on the KZN coast! 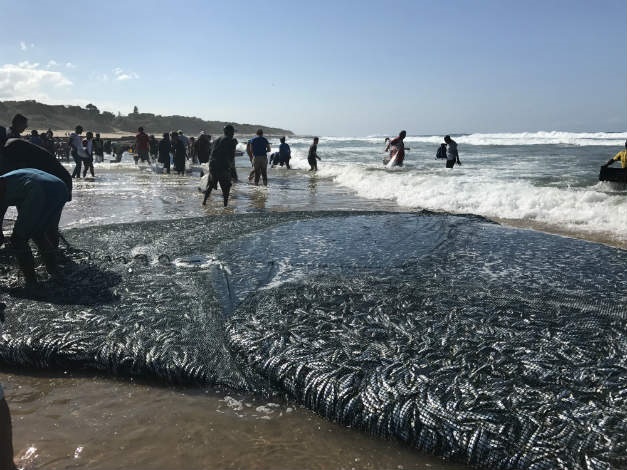 It's that time of the year again when the KwaZulu-Natal coast shows off its impressive wildlife, as the sardine run begins. The KwaZulu-Natal Sharks Board (KZNSB), in a statement on Thursday, confirmed that they had received reports of "sardine-related activity" between the Nqabara River Mouth and the Dwesa Marine Reserve.

"It was reported that there were large shoals of fish spotted, with thousands of gannets feeding in amongst these shoals," Sharks Board acting head of operations Greg Thompson said on Thursday. He said they had also received a report of activity in the Rame Heads area, 26km south of Port St Johns in the Eastern Cape.

"This activity consisted of common dolphins and gannets feeding in this area. There have been no further sightings of much activity north of this, but hopefully the sardine activity will increase between Port St Johns and Port Edward after the cold front passes later this evening."

Thompson cautioned that most of the reports and feedback they had received were from inshore areas. "So, as we all know, there is always a possibility of being surprised by fish which have moved through undetected in the deeper waters. These fish are very unpredictable and have always kept us all guessing about their movement."
"Education is the most powerful weapon which you can use to change the world." Nelson Mandela
The desire for equality must never exceed the demands of knowledge
Top

Drone footage captured by Gerhard Britz shows sardine netting at Amanzimtoti, KwaZulu-Natal, on 30 June 2019.
The 2019 sardine run in KwaZulu-Natal is in full swing with the KZN Sharks Board confirming numerous nettings and sightings on the South Coast.


The sardines are back on South Africa's east coast, with the KwaZulu-Natal Sharks Board (KZNSB) confirming reports of numerous sightings and nettings in the last 24 hours.

The acting head of operations at KZNSB, Greg Thompson, said there had been an increase in sardine activity on the South Coast, especially between Bazely and Amanzimtoti, over the past few days.

He said reports came in at first light on Wednesday morning, as shoals of sardines started rising to the surface about 1km offshore from Kelso through to Umdoni Point – roughly a 5km stretch.

"There were scattered shoals inshore as well, but these shoals looked thin on the surface. Sharks were seen jumping in amongst the offshore shoals and there were 40-50 Cape Gannets diving in this area. At one stage, yellowfin tuna were seen smashing through some of the inshore shoals," Thompson said on Thursday.

He said there were also numerous attempted nettings which were unsuccessful at Pennington, Scottburgh, Illovo and Winkle.

However, there were two confirmed nettings at Amanzimtoti.

"The two nets consisted of around 15 crates and 250 crates. It was also reported that there was quite a lot of game fish activity with the sardines in this area," he said.

Thompson said that, by Wednesday afternoon, pockets of sardines had moved right into Scottburgh. 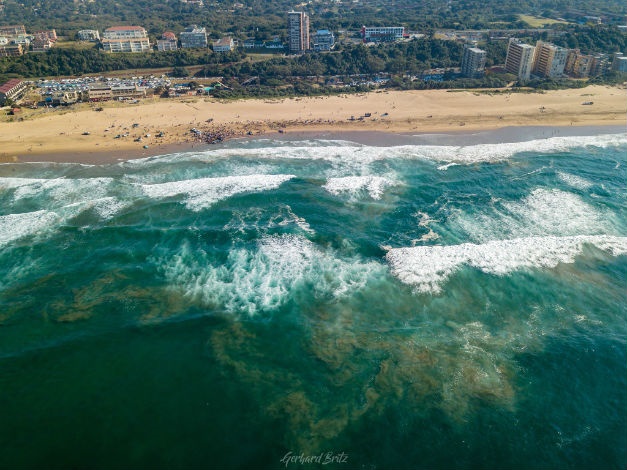 With the weather due to change on Friday, the "very unpredictable" fish could soon disappear, Thompson said.

He said there had also been activity as far south as Port Edward on Thursday morning, with sardines netted at Hibberdene. 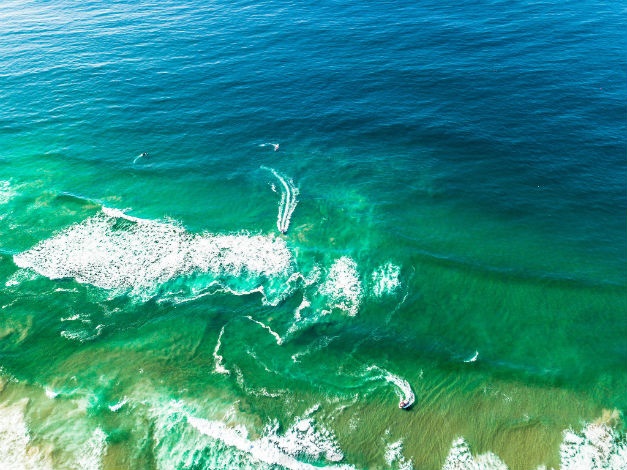 "At the moment, the bathing between Isipingo and Port Edward is banned due to the sardine related activity in these areas. If you are unsure about the bathing status, please make sure you chat to the lifeguards before entering the water."

Thompson added that the KZNSB would continue to monitor activity in the coming days. 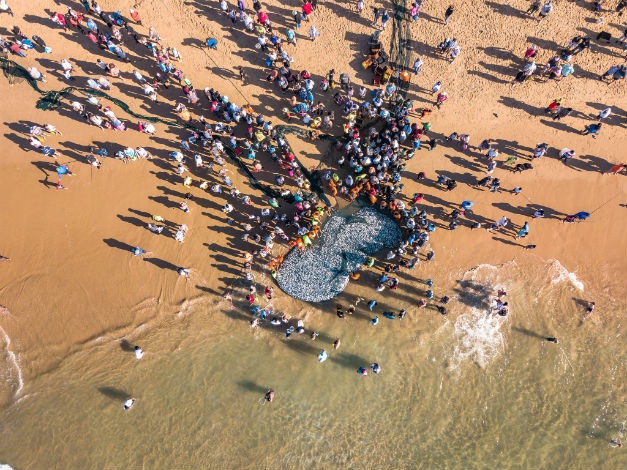 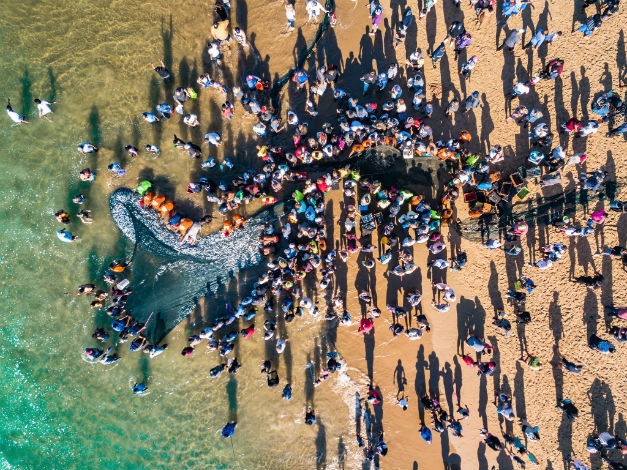 Return to “The Fishing Hole”