Advice, information and discussions on travelling in Southern Africa
3 posts • Page 1 of 1 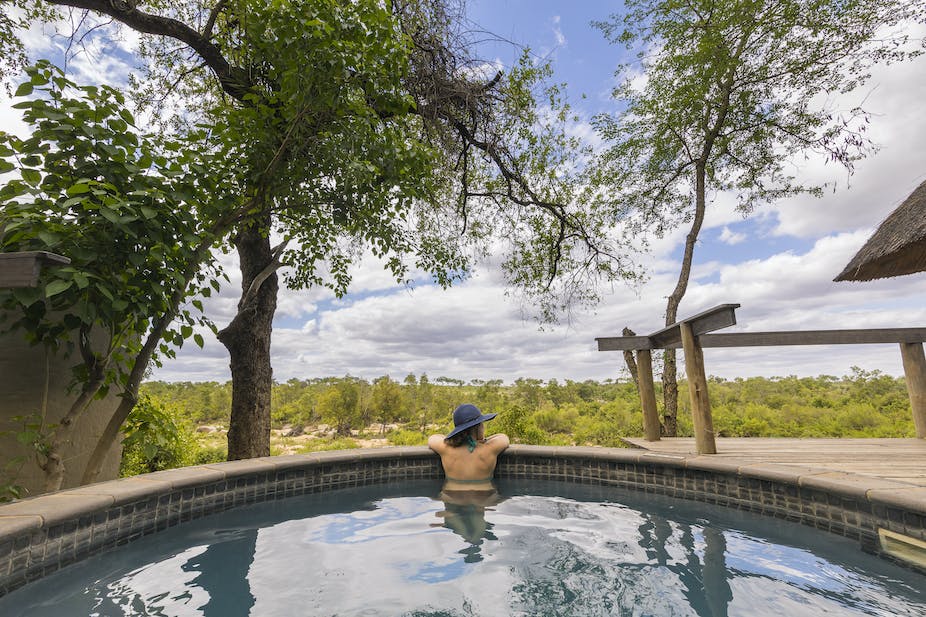 The tourism establishment could be depleting scarce water resources to the detriment of local communities. GettyImages

Wildlife tourism is a major source of income and livelihood for many rural communities across southern Africa. But it also presents a potential threat to water resources.

Many wildlife tourism lodges in the region are in remote locations where little or no infrastructure exists. They depend on natural sources such as rivers, dams and boreholes for their water needs.

The lack of infrastructure such as housing, roads and public transport in these remote places also means that the staff employed at lodges often reside on the tourism properties. Lodges thus need water not only for tourism operations but for the domestic use of staff members.

But rural residents too need water to secure their livelihoods, such as raising cattle. Lodges’ water use should not be to the detriment of the local communities.

In Southern Africa water resources are becoming stretched because of growing population numbers as well as the reduction in the volume of available good quality water as a result of environmental degradation, erratic rainfall and climatic variability brought on by the effects of climate change.

Tourism ventures need to balance the needs of guests and staff with the needs of surrounding communities. Imbalances in a water-stressed region like southern African could lead to conflict around water use, similar to what has already been experienced in many island states.

Working with wildlife tourism industry role players, our research team recently completed a multi-year study that reviewed the per capita water consumption of guests and staff at more than 30 exclusive luxury wildlife lodges across Namibia, Botswana and South Africa.

Wildlife tourism companies approached the researchers to do an independent review of water quantity and quality across their southern African operations. The results were made available to industry participants. This view of the existing situation would be used to set benchmarks for comparison across the industry.

Our research used the international standard unit of measurement for guest water use namely litres per guest per night. Consumption includes all the activities associated with the lodge operations such as bathing, cleaning, cooking, laundry, gardening and swimming pools.

The average guest consumption across the three countries was 2,073 litres per guest per night. This average consumption is three to four times that of hotels in other countries.

We found that the international standard wasn’t suitable for the wildlife tourism industry in southern African. This is because of the large number of staff who reside on the lodge premises. They add a lot to the total volume of water consumption at the tourist establishments. According to our research, the average water consumption per bed or per capita, when staff consumption is included, was 503 litres per bed per night.

The tourism ventures could be depleting scarce water resources to the detriment of local communities and the wildlife attractions that brought tourism there in the first place.

The study proposes water-use benchmarks for the wildlife tourism industry in southern Africa, namely 2,073 litres per guest per night or 503 litres per bed per night. This is based on the average consumption recorded during the study across all the investigated tourism ventures. These benchmarks would need to be reviewed in future as consumption rates come down. The proposed benchmarks, which would be a first, provide targets for the wildlife tourism industry in southern African to aim for.

The benchmarks also serve as a planning tool for future wildlife tourism developments. Developers would be able to ensure that the type and size of developments are appropriate for the available water resources.

Although the proposed benchmarks won’t be monitored or regulated by government at this stage, it’s important for the industry to adhere to them in an attempt to reduce water consumption.

Even though the proposed benchmarks provide some form of water use reduction, wildlife lodges across southern Africa will need to improve their water management in order to reduce their consumption drastically and avert possible water conflict situations in local communities. Wildlife lodges may in the future need to scale down or even close operations during water scarce times to ensure equitable water availability.

The tourism lodges that are relatively well resourced compared to the host rural communities will need to find new ways to reduce, recycle and use alternative sources of water such as rain water harvesting. This may require capital investments.

Guest and staff awareness and education on water use should also become a standard for the tourism industry. Luxury wildlife lodges should always manage their water usage with the local community’s needs in mind.

https://theconversation.com/wildlife-to ... s%20enough
"Education is the most powerful weapon which you can use to change the world." Nelson Mandela
The desire for equality must never exceed the demands of knowledge
Top

Re: Wildlife tourism in southern Africa uses scarce water - we propose how much is enough

An interesting concept, but very wide, this field?

Staff and guests would use water somewhere regardless, and in fact many lodges secure their own water and sewage systems off municipal lines, thereby saving municipal water for communities and releasing clean waste water.

Re: Wildlife tourism in southern Africa uses scarce water - we propose how much is enough

It is a rather superficial article with little substance and few facts IMO.
"Education is the most powerful weapon which you can use to change the world." Nelson Mandela
The desire for equality must never exceed the demands of knowledge
Top
3 posts • Page 1 of 1

Return to “Travel Advice and Discussions”