Discussions and information on all Southern African Reptiles

In this video, an African rock python swallows a vervet monkey whole while the rest of the troop watches hopelessly. Later, a herd of elephants also quickly meander by. This video was filmed in the Kruger National Park between the Olifants and Satara rest camps.

Here is the incredible story:

"A few cars were parked on the verge of the H1-5 main road between the Olifants and Satara Rest Camps. This wasn’t out of the ordinary in South Africa’s premier game reserve – the Kruger National Park – on a typical sunny December morning in 2015.

We pulled up next to the parked cars ambivalently, expecting an animal of the herbivorous kind to appear. After a quick scan of the bush, we noticed some vervet monkeys chattering and jumping around on some fallen tree branches. Unfortunately, this wasn’t the sighting we had hoped for, we often had vervets in our garden back home in Kwa-Zulu Natal. But why did this particular troop have an audience?

We interrupted a woman through her open passenger window who was staring intently at the troop with binoculars. “Python”, she said, pointing towards the bottom of the tree, “it has caught a monkey”. We scrambled for our cameras to see if we could locate the great snake. With the help of the camera zoom, glinting scales on one of the thicker fallen branches emerged – it was an African rock python. In its coil, tufts of grey-brown fur appeared as the snake unwound. It was true, the python had caught a vervet and it was about to swallow it.

Watching the python’s jaws expand as it engulfed the lifeless mat of grey-brown fur was hard to watch, as amazing as this sighting was. It was even harder to watch the other monkey’s reactions. Many clearly seemed to be in distress, chattering relentlessly and running around the colossal constrictor as if in a blind panic. There is nothing like witnessing the reality of death, the fragility of life and the unpredictability of nature in the African bush. This is a sighting that we will never forget." 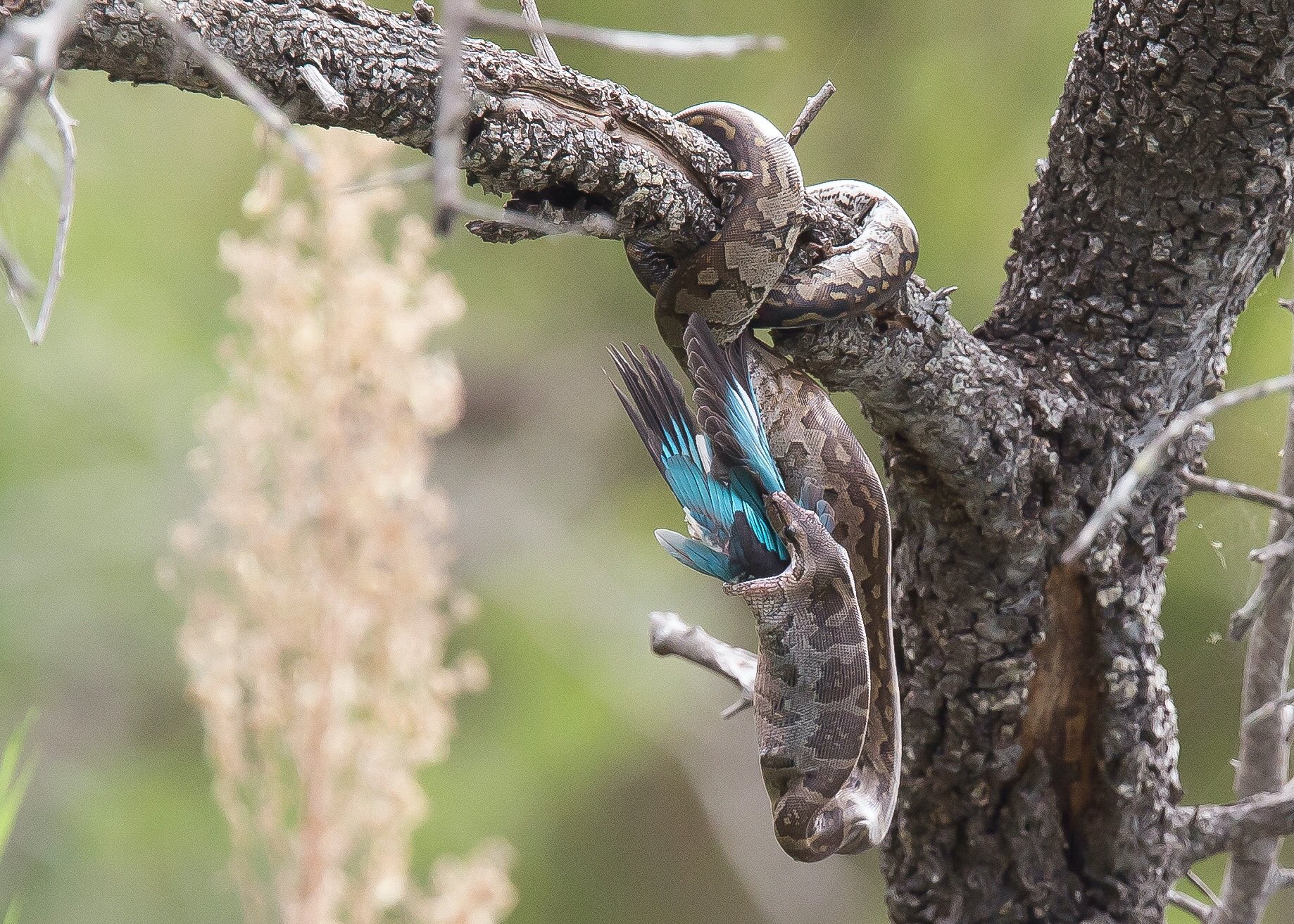 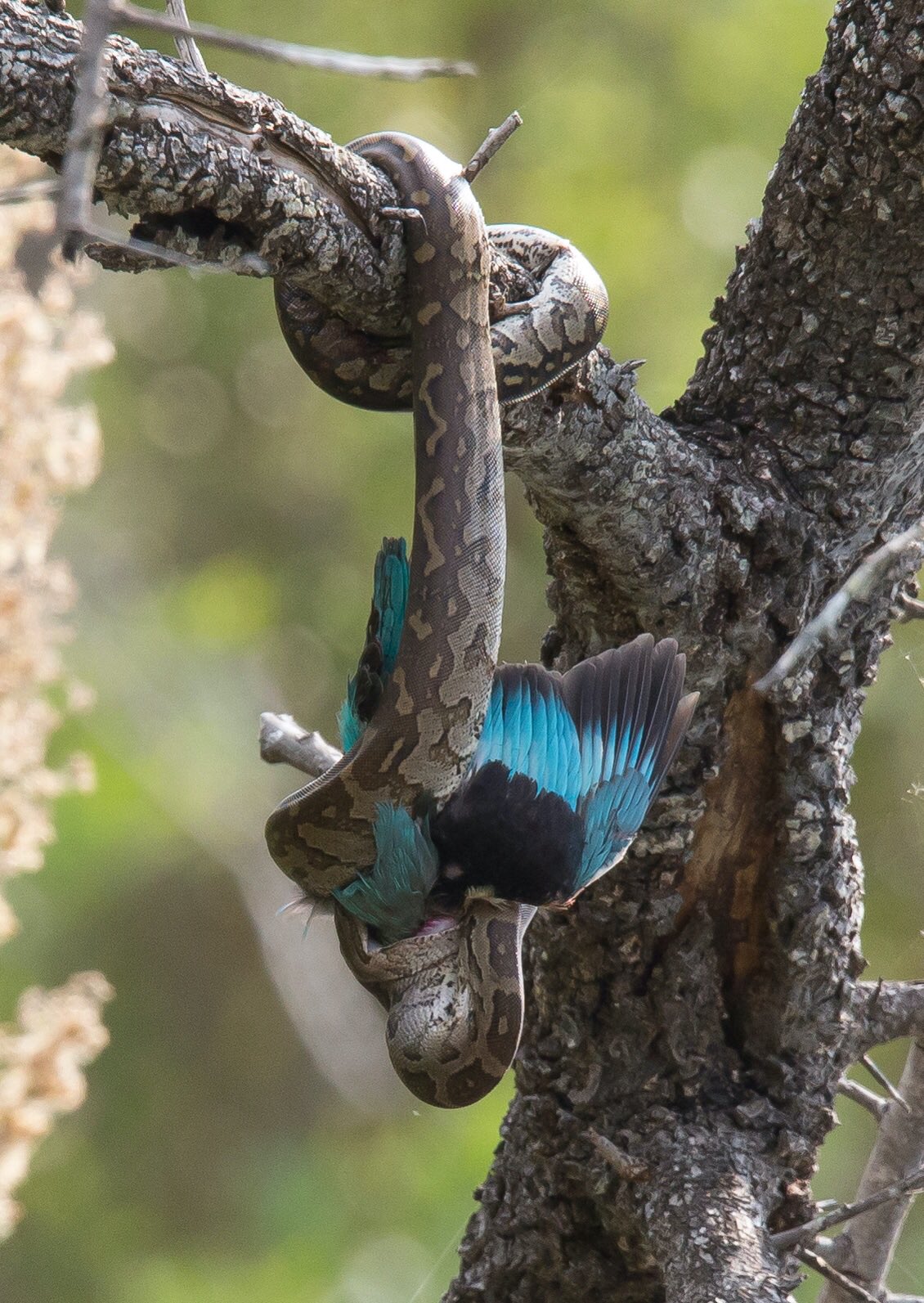 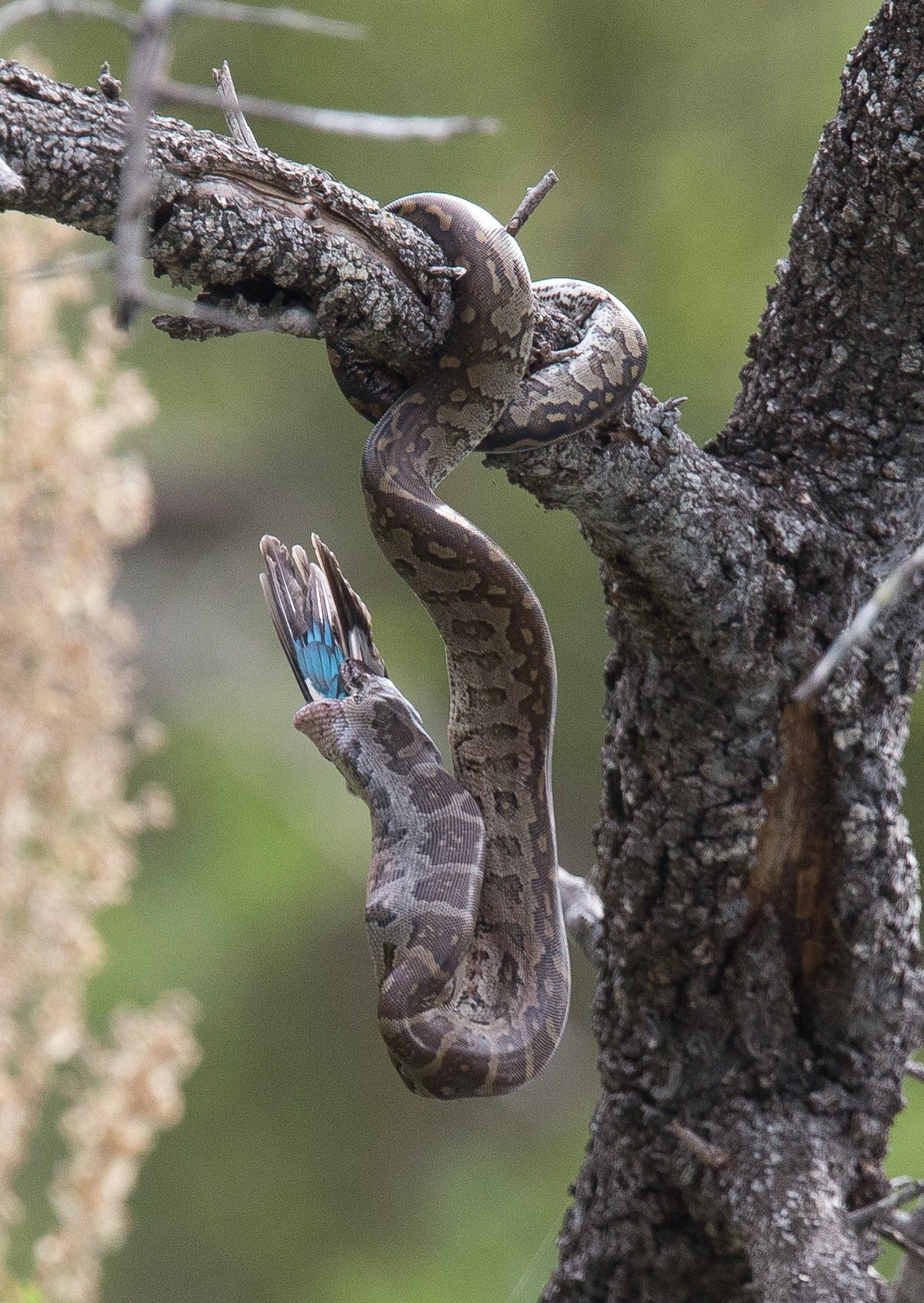 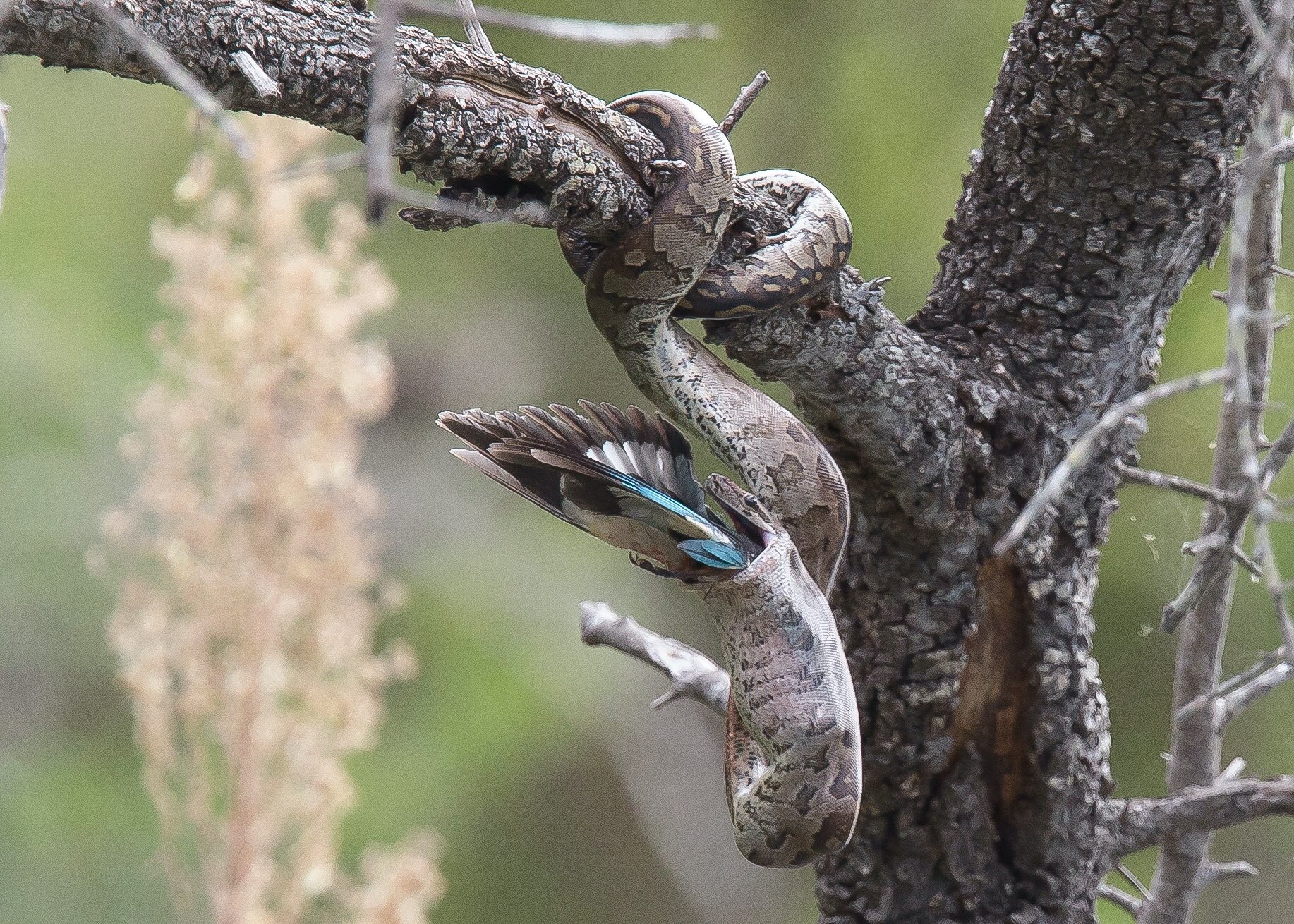 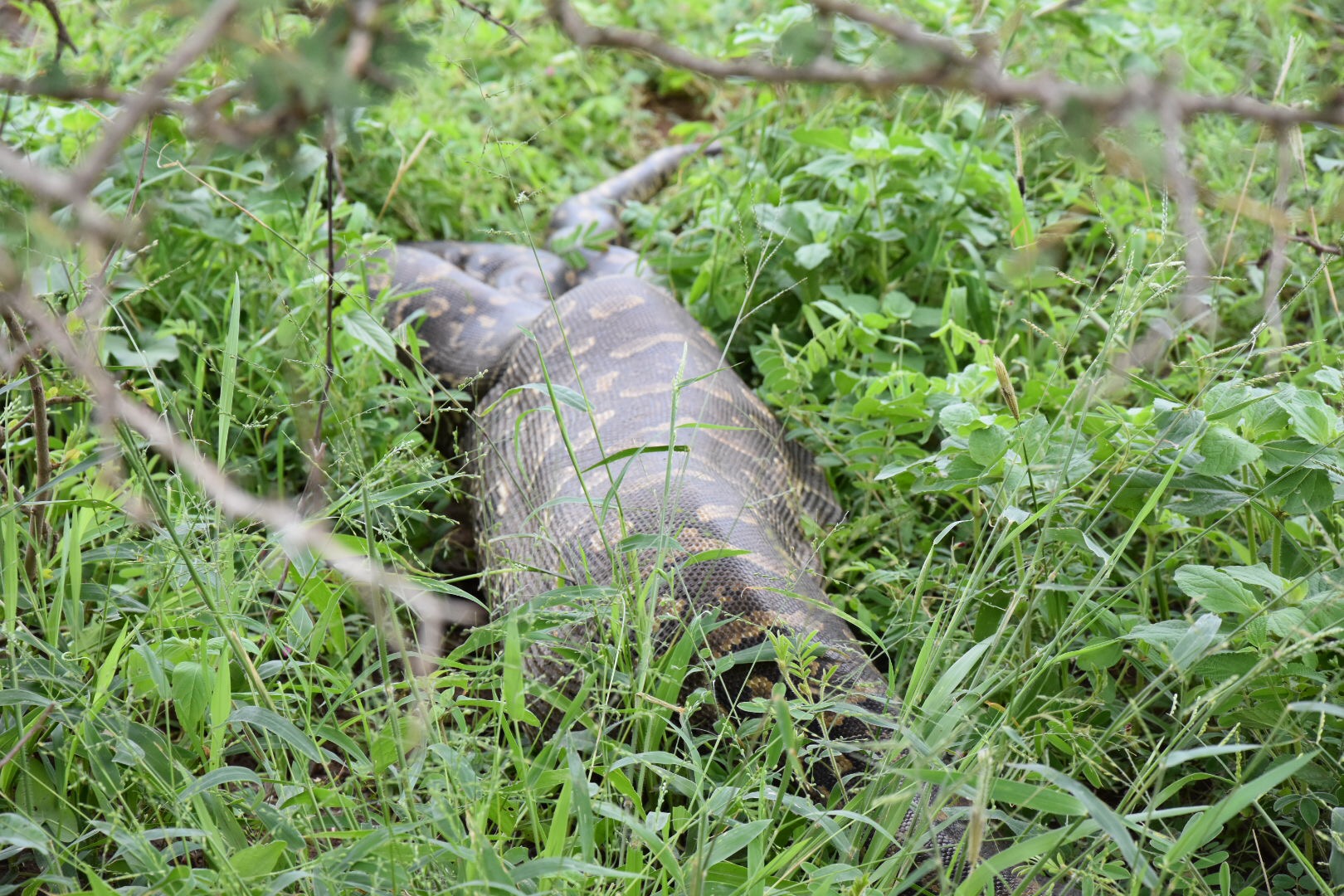 Kruger Sightings
@LatestKruger
February 2017
A huge python near Crocodile Bridge.
The python was digesting an impala and therefore unable to move. For us, it was simply fascinating!
I hope you guys enjoy the picture as well.
Tinged by Jonas Ohlmeier from Dortmund, Germany
Please check Needs Attention pre-booking: https://africawild-forum.com/viewtopic.php?f=322&t=596
Top

"Education is the most powerful weapon which you can use to change the world." Nelson Mandela
The desire for equality must never exceed the demands of knowledge
Top
116 posts