Discussions and information on all Southern African Invertebrates Leuconitocris nigricornis is a species of beetle in the family Cerambycidae. It was described by Olivier in 1795, originally under the genus Necydalis. It is known from Tanzania, South Africa, the Central African Republic, Mozambique, Uganda, Malawi, and Zambia
"Education is the most powerful weapon which you can use to change the world." Nelson Mandela
The desire for equality must never exceed the demands of knowledge
Top Distribution
This subspecies is found in Namibia. 
Description
Medium-sized (body length 13 mm), short and stocky, coarsely sculptured on the pronotum and especially at base of the elytra. Black, with a covering of grey down and a greyish-white patch on each side of the pronotum. Near base of each elytron is a raised area with a U-shaped tuft of brown hairs. Antennae and legs blackish-brown, with a covering of greyish-white hairs.

Distribution
Widespread in South Africa, except Western and Eastern Cape. 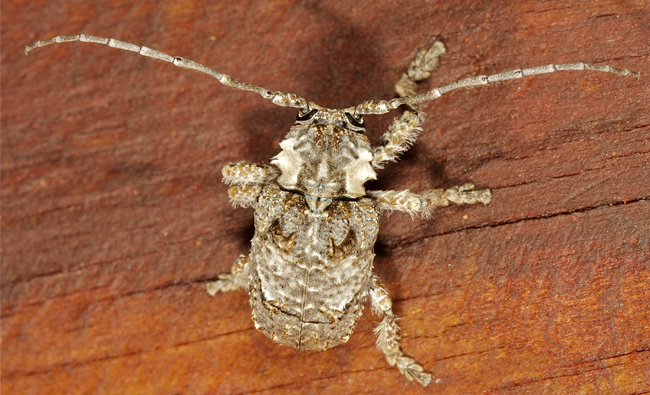 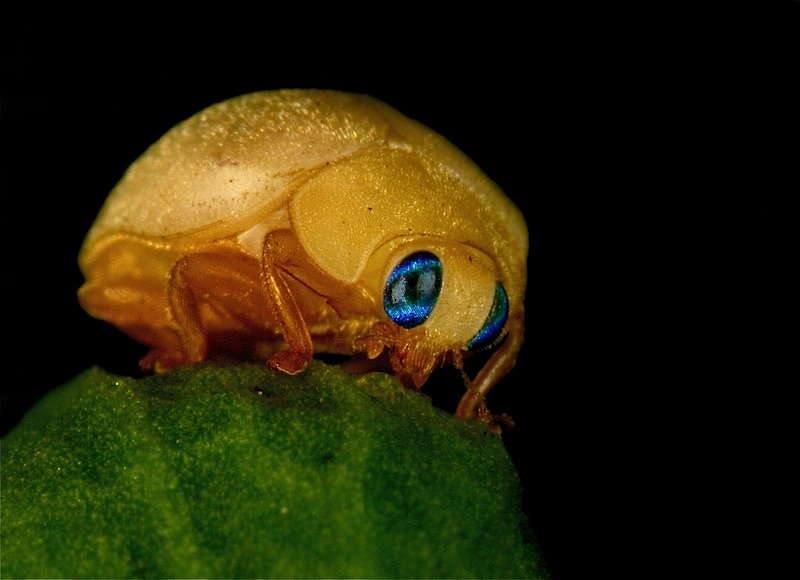 All species of Ortalia are large, pubescent (hairy) beetles with fine punctuation. They have short 10 to 11-segmented antennae and very large, oval finely granulated eyes. Adults and larvae of all species are are predators and eat psyllids.
In most species of lady beetles (Coccinellidae) both larvae and adults are predatory, and the family has an illustrious history of use in biological control. However, it is now generally recognized that most of these so-called predators feed facultatively on honeydew, pollen, nectar and fungi, and many species regularly ingest small amounts of plant tissue even in the presence of abundant prey.
Among the predaceous coccinellids, feeding preferences vary widely. Most of the preferred prey belong to the hemipteran suborder Sternorrhyncha (aphids, aldelgids, scales, mealybugs, whiteflies, and psyllids). Some coccinellid species are known to feed on ants. Other coccinellid species are specialists on non-insects; for example, all members of the tribe Stethorini prey on tetranychid mites.

Description
A relatively large ladybeetle, measuring about 5–5,5 mm in length and 4,0–4,5 mm in width.
It is pale yellow without patches on the elytra. Covered with short yellowish down. Head, pronotum, appendages including mouthparts, are orange.

Distribution
Throughout Southern and Eastern Africa. The Alticini is a tribe composed of minute to medium sized beetles, whose enlarged hind femora and renowned jumping ability have earned them the common name of ‘flea beetles’. They are highly specialised phytophagous insects. Both the adult and larval stages feed on stems, leaves or roots, and rarely on flowers, in almost all the higher plant families. The tribe Alticini includes 4,000 to 8,000 species, grouped in approximately 500 genera. This taxon has a world-wide distribution, but occurs mainly in the tropical regions of South America, Africa and Asia.

Jumping activity is traditionally considered an anti-predator mechanism that originated as a result of predator–prey interactions or as a response to disturbance, i.e. a defense reaction. The uniqueness of this type of locomotion is thought to be, foremost, that it provides an effective defense mechanism for comparatively low energetic outlays accompanied by relatively simple structure. The force needed to deform the ‘spring’ can be recovered further in its elastic recoil. The spring is usually composed of the rubbery protein resilin, providing elasticity and preventing fractioning and fatigue of the material. The slow muscle contraction performs a mechanical reversible deformation of the spring, energy is stored in the form of elastic strain energy and finally very rapidly converted into kinetic energy. The morphological structures for the accumulation and storage of the elastic energy in jumping insects are variable, taking the form of semilunar plates in grasshoppers, locusts and crickets, resilin pads in fleas, thoracic pleural arches in froghoppers and planthoppers, and an abdominal appendage in springtails. Although jumping beetles are well known, the specialized jumping apparatus is not widespread and has been observed so far only in the families Curculionidae (weevils), Chrysomelidae (leaf beetles), Buprestidae (jewel beetles) and Scirtidae (marsh beetles).

The genus Calotheca is widespread in Sub-Saharan Africa, especially in the southern and eastern areas. Records of Calotheca (reported as Blepharida) hosts in Africa are scarce, but they all identify the genera Rhus, Ozoroa, Schinus and Searsia from the Anacardiaceae, as well as the genus Commiphora from the Burseraceae, as primary host plants. Description
Size: approximately 11 mm in length.
The head is black while the neck shield is an orangy brown. The elytra are a striking metallic green with fine longitudinal grooves.
Top 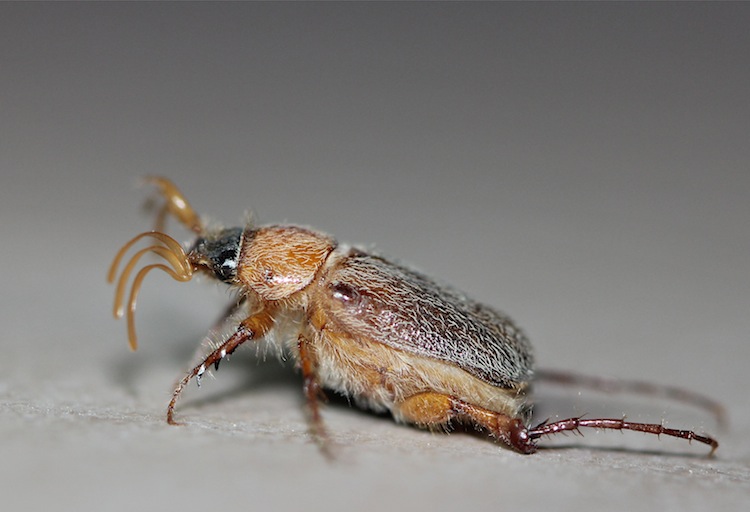 Genus Scapanoclypeus Description
Size: 5 to 12 mm. Cylindrical body, elongated.
Clypeus vertical, not on the same plane as the forehead, presenting at its base three denticles.
Antennas of 9 articles; the III no longer than the IV. Antenna club of 3 articles, much longer than the funicle (four times its length). Reduction of mouthparts. Last article of the maxillary palps excavated on the top. Conical wrasse, rounded at the apex. Canthus ocular present.
Pronotum well transverse; rounded sides, ciliate; obtuse anterior angles; anterior margin without membranous hem.
Elongated elytra, with straight sides, parallel, not enlarged before the apex; poorly marked humeral calluses.
Protibia tridentate, the basal tooth weak or barely indicated, the elongated median, the apex long and curved. No protibia spur (except in sinepunctatus Sehnal and hardap Sehnal). Pro- and non-dilated mesotars, without tufts of bristles below. Elongated protarse articles. Simple, equal tarsal claws, without dentil below. Mesotarse elongated, twice as long as the mesotibia. Globular metafemur. Metatibia elongated, triangular. Elongated metatarsus, article I longer than II.

The genus Scapanoclypeus Evans is distinguished from other afrotropical genera by the combination of the following characters: small size (5 to 12 mm); elongated, cylindrical body; antennas of 9 articles with very long club of 3 articles; conical labre; vertical clypeus; carine and denticulate clypéo-frontal furrow; anterior margin of the pronotum without a membranous hem; tridentate protibia, with or without apical spur; very long mesotarse; simple, equal, not denticulated tarsal claws; long metatarsus, article I longer than II.

Biology
Adults caught in the lights, sandy regions, flying well, from September to July. The larval stages are not known.
The reduction in mouthparts indicates that adults are not feeding.

Taxonomy and morphology:
The Scarabaeini comprise three genera, Scarabaeus, with 136 species, Pachylomera with two, and Pachysoma with 13 species. The tribe is characterized by members with the anterior margin of the head, which is sexdentate, comprising the quadridentate anterior margin of the clypeus and two lateral teeth formed by the anterior angles of the genae. The beetles have long legs for ball- rolling and/or fast running. The tibiae of the forelegs are quadridentate, although the proximal tooth may be represented by only a vestige. There are no fore tarsi. The species are mainly black although some show either red elytra or red patches on the elytra (some Scarabaeus, Pachysoma). A few are metallic-coloured (some Kheper). They vary in size from quite small (7.0 mm) to very large (48.5 mm).
Most of the species fly strongly but a number of desert taxa are flightless (including all the Pachysoma species).
Scarabaeus comprises four subgenera, the nominate subgenus, Kheper, Scarabaeolus and Sceliages.

Biology:
The Scarabaeini comprise primarily coprophagous species. They may be readily attracted to many dung types, or more specialized, with some also strongly attracted to carrion. Most species are active by day but some Scarabaeus, Scarabaeolus and Kheper are night-active. Whereas flightless species drag pellets and detritus, most flying species engage in ball-making and ball-rolling.
If ball-making and ball-rolling species form pairs at the dung, the males roll the ball with the female clinging to the side (Kheper, Scarabaeus (Scarabaeus)) or following behind (Scarabaeolus). When large numbers of Scarabaeini are active there is frequently combat between early arrivals at a dropping that have completed a ball and late arrivals that attempt to take possession of this ball. During such encounters, the object is to dislodge the incumbent from its defensive position on top of the ball or to deter the attacker by using the front legs to lift and flip the opponent away.
The ball may be rolled some distance before being buried in a burrow where it is used either for feeding or breeding.
Once a suitable pile of dung has been located, some species quickly sculpt a piece into a ball and start to roll it away along a straight path. The end destination for the ball is, at this point, unknown. The straight-line departure helps to minimize the time that the dung beetle spends near the dung pat, where foraging conspecifics congregate and frequently try to steal a ready-made ball. After some distance, the beetle finds a suitable patch of ground and buries itself together with its ball of dung. The ball is then slowly consumed in the safety of the ground.
Leaving a defined place might at first glance seem simple but is, as it turns out, impossible without an external directional reference—i.e. some form of compass. This is true even for ensuring progress away from a dung pile. Foraging dung beetles use a number of celestial compass cues to guide them along their straight tracks: the sun, the moon, the pattern of polarized light and even the Milky Way.
Nests of most Scarabaeini (Kheper, Scarabaeus (Scarabaeus)) comprise a chamber at the end of the burrow in which one or more brood pears are constructed and tended by the parent female.
Flight activity patterns may be related to the cooler conditions under which most species have been observed to fly, i.e. in the middle of the day under cooler conditions, but in the early morning, late afternoon, or at night under warmer conditions and, especially, after rainfall with its cooling effect on daily temperatures. At least some species are able to raise their body temperatures, enabling them to fly and exploit dung under cooler conditions. 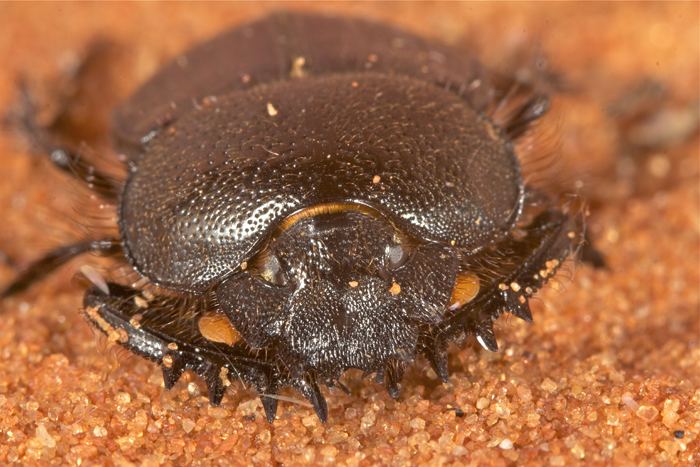 Genus Scarabaeus
The genus Scarabaeus consists of a number of Old World dung beetles. Afrotropical species of Scarabaeus Linnaeus are confined chiefly to the southern part of the continent, but one occurs as far northeast as Somalia (S. laevifrons Fairmaire) and another extends northwest into Senegal (S. palemo Olivier). Most species are sculptured and hirsute, due to wide separation of lateral carinae, have the elytral edge more-or-less rounded in profile, and nearly two-thirds possess a vestigial second mesotibial spur. Sexual dimorphism is slight to altogether absent.

Subgenus Scarabaeolus
Scarabaeolus BALTHASAR - species belonging to this subgenus are morphologically characterized by their small size (relative to most Scarabaeini species), a second vestigial mesotibial spur and hunched body, which closely resembles that of Sceliages. Most are confined to the arid and semi-arid regions of the southern afro-tropics. A few species have a more northerly distribution, such as S. Scholtzi, a flightless species occurring in coastal Somalia. Many species are opportunistic feeders, partitioning various types of dung as well as carrion in regions where dung is a scarce resource. Some species have been observed feeding on carcasses of millipedes and P. femoralis.
The number of recorded species of this subgenus is 41 (March 30, 2018)*, most of them show a regionally restricted distribution pattern centred on southern and southern central Africa. Furthermore, one observation of a Scarabaeus (Scarabaeolus) bohemani female following a male rolling a ball suggests that members of the subgenus may also show behavioral differences to Scarabaeus (Scarabaeus) species in which the female clings to the side of a ball being rolled by the male. 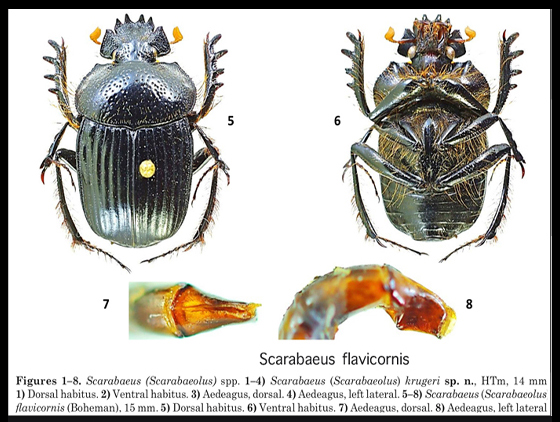 Biology
Nocturnal telecoprid (ball-rolling) dung beetle. The activity of S. flavicornis is much longer in summer than during the other seasons, starting after sunset at 20:00 and continuing through the night, ceasing just before sunrise at 5:00. By having nocturnal activity it can successfully avoid direct competition with larger species such as Pachylomenls femoralis. Nocturnal dung beetles can raise and regulate their body temperature by endothermic means just before and during flight, but thoracic warm-up is particularly expensive in energetic terms for small beetles because of radiant heat loss. That's why S. flavicornis is less active during spring and autumn, in cold conditions the activity generally starts later and ceases earlier.