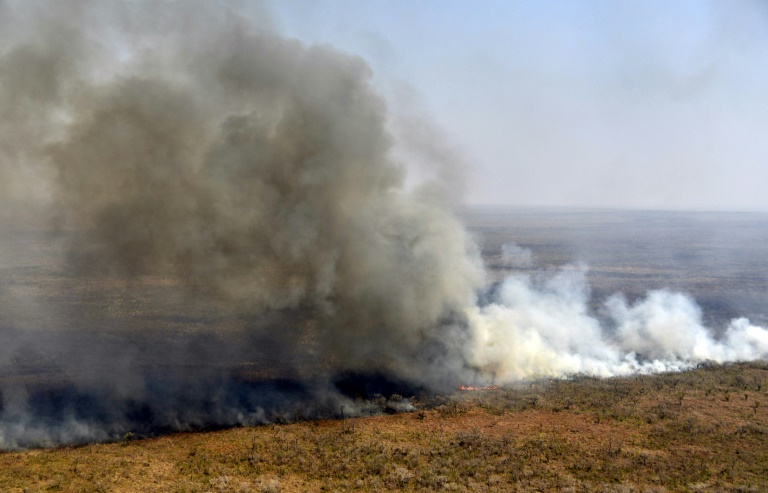 Fires have destroyed 1.2 million hectares of forest and grasslands in Bolivia this year, the government said on Wednesday, although environmentalists claim the true figure is much greater | © AFP | Aizar RALDES

“We believe that the damage is big and wide in terms of our heritage of rock art,” said Danilo Drakic, chief archeologist in the eastern Santa Cruz department.

Drakic said fires that have raged since May had caused significant damage to rock art sites near the eastern town of Robore. The sites contain engravings dating from 1,500 BC.

“A dark layer of soot has covered all the paintings,” said Drakic, citing an initial appraisal of the damage. Heat from the fires “has caused stones to break, even to collapse.”

He said a full assessment of the damage could only be made once the fires had been quenched.

Authorities declared the town, some 1,300 kilometers (800 miles) east of the capital La Paz, a “departmental capital of rock art” in May 2017.

Bolivia’s culture ministry said the fires were endangering the Jesuit Missions of the Chiquitos, six settlements built by the Catholic religious order in the 17th and 18th centuries that were declared World Heritage Sites by UNESCO.

Culture and Tourism Minister Wilma Alanoca said the Jesuit sites closest to the fires “have not yet been affected” but are in danger.

“There is no doubt that there is an impact on the intangible heritage of the area, which will have to be evaluated once all heat sources are eradicated, which is a priority for the central government,” state media quoted Alanoca as saying.

Fires have so far destroyed 1.2 million hectares (3.2 million acres) of forest and grasslands in Bolivia this year, the government said last week, though environmentalists claim the true figure is much greater.

The presidents of Colombia, Peru, Bolivia, and Ecuador arrive for a regional summit on fires that have devastated the Amazon, which are also being attended by representatives of Brazil, Suriname and Guyana.

Wildfires in Bolivia have torched two million hectares of forest and grassland since August, including some environmentally protected areas, officials said on Monday.

One cabinet minister decried the "macabre game" of fires being put out, then reset behind the backs of firefighters by "saboteurs".

Santa Cruz is the hardest hit of Bolivia's departments since the fires began in May and intensified in late August.

"We've had more than two million hectares of land burnt" in Santa Cruz, said Asin. "We've already gone nearly one month (with this problem) and a national disaster has yet to be declared."

Asin said that blazes have destroyed nearly 900 000 hectares of protected areas. Most affected are the Otuquis and San Matias areas of eastern Bolivia, rich in diverse flora and fauna.

Defense Minister Javier Zavaleta said that people have been found illegally restarting fires in places where the blazes have been put out.

"We are certain that the fires are being deliberately set," said Zavaleta. He blamed "saboteurs", and farmers and landowners "that start blazes that they cannot control", he told reporters.

"This is a macabre game. We put out the fires and there are people behind us that are starting them again.

Environmentalists blame laws enacted under Morales, who has encouraged burning of forest and pasture land to expand agricultural production. The government attributes the blazes to dry weather and winds.

Bolivia's government recently authorized farmers to burn 20 hectares instead of the usual five hectares - which is believed to have contributed to thousands of wildfires.
"Education is the most powerful weapon which you can use to change the world." Nelson Mandela
The desire for equality must never exceed the demands of knowledge
Top

Should we worry more about the wildfires in Africa or in the Amazon?


phpBB [video]
"Education is the most powerful weapon which you can use to change the world." Nelson Mandela
The desire for equality must never exceed the demands of knowledge
Top

He can go hand in hand with Mr Trump and ruin the WHOLE EARTH which is the property of all enough. It is too small for local egocentric policies

Rain puts out some of Bolivia’s wildfires
Heavy rain that has drenched eastern Bolivia’s Chiquitania tropical savanna has put out fires that have ravaged millions of hectares in recent months, authorities said Sunday.
A general view of the fires in the Bolivian Amazonian area of San Jose de Chiquitos in Santa Cruz, on September 9, 2019 | © AFP/File | STR 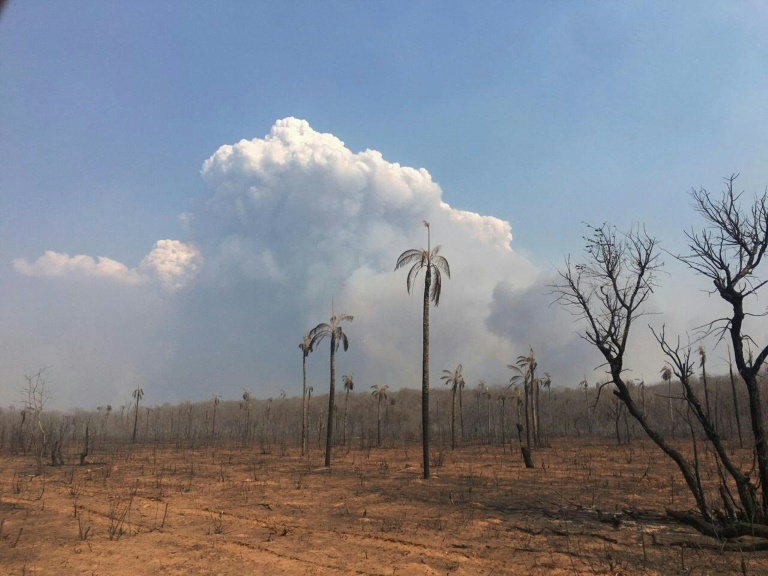 “It has rained all across Chiquitania. And our satellite no longer shows any active forest fire,” said Cynthia Asin, the top sustainable development official in the Santa Cruz region.

Still, she said, firefighters will wait 24 hours to be sure that all fires are completely out before they head out of the area.

Bolivia in August enlisted special firefighting planes, a Supertanker Boeing 747 and a Russian Ilyushin, as well as helicopters, 5,000 firefighters, soldiers and police to combat the blazes.

The fires, which have devastated more than four million hectares (10 million acres) since August, completely destroyed the primary forest extending over 100 hectares in the Tucavaca reserve in Santa Cruz.

There were no immediate reports on whether fires in other parts of the country, including Tarija in the south and Cochabamba in the center, were extinguished.

The government attributes the blazes to dry weather and flame-fanning winds.

To put it in perspective, Kruger Park covers 2 million hectares.

The rain was a stroke of real luck, but it should be all over.

The Pope has held a whole Amazon synod

I don't intend to offend any serious religious believers
"Education is the most powerful weapon which you can use to change the world." Nelson Mandela
The desire for equality must never exceed the demands of knowledge
Top

It has rained here in Bolivia and although some places are still burning, the situation is much better.

Some say more than 4 millions hectares have burnt and more than 2 millions animal have been killed (especially the slower anteaters and armadillos, reptiles etc...).

But the government wants to increase the agriculture lands by two by 2025, that means more burning and deforestation...