Free-roaming elephants cause problems in Manguzi
One resident, Muzuwenkosi Dlamini (45), said the main problem is that no one is safe as the elephants move among their homesteads and the community feels unsafe
4 hours ago Free-roaming elephants are causing problems for the Manguzi community

RESIDENTS of the eMfihlweni area under the Tembe Tribal Authority in Manguzi, say they live in fear as scores of elephants are seen roaming freely in the area.

The residents claim the elephants have caused massive damage to their crops.

One resident, Muzuwenkosi Dlamini (45), said the main problem is that no one is safe as the elephants move among their homesteads and the community feels unsafe.

‘We have reported the matter to the iZinduna, but nothing is being done. This problem is not new; it began a long time ago,’ Dlamini said.

Inkosi Mabhudu Tembe said the issue arose five years ago, and he believes that the elephants come from Mozambique and cross the border.

‘They are obviously in search of food. I also believe that when they cross the border they pick up the scent of elephants in the nearby game reserve (Tembe Elephant Park) and their movements result in the community’s crops being destroyed.

‘We have urged residents not to interfere with them because they are very dangerous.

‘We have been lucky so far that no one has been attacked. KZN Ezemvelo Wildlife has put down about 13 of them, but the problem still persists,’ Tembe said.

Ezemvelo spokesperson, Musa Mntambo, said they were not aware of the problems caused by ‘stray’ elephants from Mozambique.

‘It is true that such incidents occurred in the past where elephants from Mozambique have been found within our borders.

‘We attended to those complaints and solved them. We urged the community to inform us when they again see such elephants in their area,’ Mntambo said.
Top

If one is deaf and the other mute, there cannot be much comprehention between them 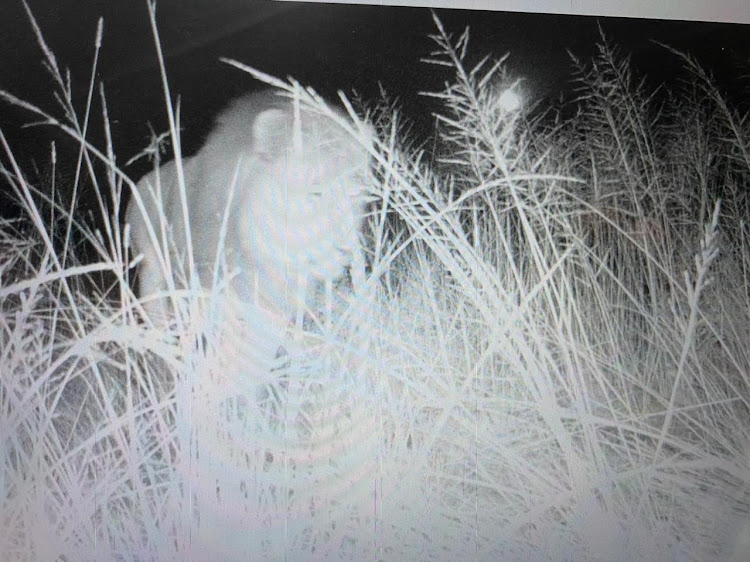 According to a local involved in the search for the apex predator, the male big cat is believed to have killed a cow on Sunday and tried to kill another one on Monday.

A camera placed near where the lion was last seen captured the large male during the night.

Ezemvelo KZN spokesperson Musa Mntambo said they were aware of reports and were investigating. Members of Nambiti Private Game Reserve joined the search for the animal on Tuesday and in an e-mailed response to TimesLIVE said all their lions were accounted for.

"We were sent a picture of a large male that is apparently at large outside Dundee. All of Nambiti’s big males are accounted for. We have offered to assist though, and some of our people will help to track and capture the lion," the statement read.

In November Times Select reported that the community of Ngolotshe lived in fear following a number of encounters with lions which had escaped from the neighbouring Hluhluwe iMfolozi Park.
Top

The hunt is on for a male lion that was spotted on a farm along the Nquthu road, a few kilometres outside Dundee.

The owner of the farm where the lion was spotted told The Witness on Tuesday that the predator killed one of her calves on Saturday. It returned on Sunday night to feed on the calf’s carcass and on Monday night attempted to kill another calf.

The farmer, who asked not to be named, told The Witness that some of the neighbouring farmers had placed a motion-sensitive camera near where the lion was last seen on her property and managed to capture a picture of the large cat during the night.

The farmer said it was still a mystery where the lion may have escaped from, as there were no game reserves close to her farm except for Nambiti Private Game Reserve.

“We did contact Nambiti Private Game Reserve to ask if it was their lion, but they said all their lions had collars and had been accounted for,” she said.

Herman de Wet, chairperson of the Dundee and District Farmers’ Union, said search teams were out looking for the lion and there were plans to get a helicopter to help with the search.

He said the plan was not to kill the lion, but to sedate it and relocate it to a protected area.

In November 2018, The Witness reported about a Vryheid man, Sabelo Mbense, who was lucky to survive a lion attack in the farming village of Gluckstadt.

Mbense escaped with bruises under his right armpit.

That lion was never captured.


Ezemvelo KZN spokesperson Musa Mntambo said they were aware of reports and were investigating the matter. He said they were also searching for the lion with help from local farmers. Mntambo added that in the past couple of years, there had been reports of two lions roaming around Vryheid.

He said one of the lions was killed by the public, but ithe other was never captured.

He said the lion on the loose at Dundee might be the same animal.


DURBAN - A death warrant has been signed for the lion at large in the Dundee-Nqutu area of northern KZN.

Ezemvelo KZN Wildlife confirmed a destruction permit has been issued for the creature, although a decision whether or not to exterminate the feline will be carried out if and when it arrives at a baited trap.

“The circumstances at the time of next sighting will determine the method of capture which will probably be killing it to protect human life,” Musa Mntambo, spokesman for Ezemvelo said. “A destruction permit has been issued according to applicable legislation in circumstances like this.”

The Democratic Alliance has objected to the wildlife agency’s intention to kill the lion and has urged them to capture it instead.

“But it would seem that Ezemvelo is incapable of live capture,” said MPL Heinz de Boer who last week intended to question Co-operative Governance and Traditional Affairs MEC Nomusa Dube-Ncube about its possible extermination during a provincial, conservation and environmental affairs committee meeting. However, she did not attend it, he said.

“Now I shall have to send a written question and that can take a month or two to get an answer. By then the lion will probably be dead.“

He added that the DA had called for a moratorium on the shooting of the Big Five by Ezemvelo and that this has been ignored by the ANC.

Back in the bush where the lion is at large, Mntambo said that only one lion had been captured by a trap camera. It is believed to have been one of two lions that escaped from a sanctuary in the area last year.

“One farmer claims to have lost a cow or so from his farm,” Mntambo added.

“The trap has been set for a lion but it has not yet returned.”

Two years ago a man narrowly escaped a lion attack while he was walking along a bush path near Gluckstadt, between Melmoth and Vryheid.

The Independent on Saturday
Top

Poor lion
Next trip to the bush??

SANParks released a statement on its Kruger community page on social media confirming that a field ranger had to shoot a male elephant which was endangering the lives of Kruger National Park staff members.

The statement read: ‘Dear all, staff members were charged by a young adult male (bull) inside the Pretoriuskop staff living quarters.’

‘Field rangers had to shoot the elephant. The elephant ran out of the living quarters and died. It was threatening the lives of staff, and there was no alternative. Fortunately, no one was injured.’ According to the Letaba Herald, the ‘elephant ran out of the living quarters and died’.

The news outlet also said that there were ‘several outraged comments’ but that ‘an admin of the SANParks group reassured members that there was no alternative’ and that the rangers had to make ‘an instant life-or-death decision’.

When in musth (a season where testosterone levels can rise to 60 times higher than usual) young bulls can become aggressive and very dangerous.
Top

And lions around in Gauteng

No missing lions have been reported on Gauteng's West Rand, police said on Wednesday.

This is as they continue to search for a pair of lions that were reportedly spotted roaming in Westonaria, west of Johannesburg, on Tuesday afternoon

Police spokesperson Sgt Audrey Sefara said there were reports from two sources about two lions in the area. One said the lions were spotted behind the Westonaria sports complex.

No further sighting of the lions were reported, she said.

Sefara called on anyone who has seen the lions to contract the police.
Top
51 posts

Return to “Other Conservation Issues”