Not the usual suspects found in Kruger .

Not the usual suspects found in Kruger . 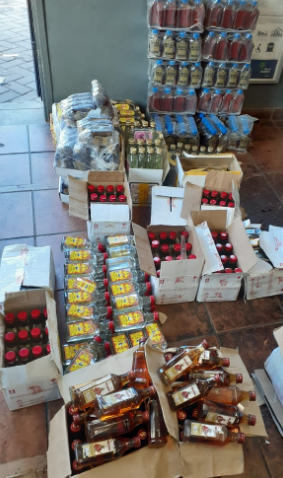 Some of the items seized from the seven men who were caught sneaking into SA from Mozambique.
Image: Supplied / SAPS

Kruger National Park rangers who had intercepted a group of men illegally entering SA from Mozambique found large amounts of alcohol, cigarettes and skin lightening creams in their possession.

“According to information, the rangers were on duty patrolling along the fence which separates SA and Mozambique. They then spotted about 20 men from the side of Mozambique entering the Kruger National Park,” said Hlathi.

“These men started running after being instructed by the rangers to stop. Seven were apprehended but others managed to flee. The men had illicit cigarettes, liquor as well as skin whitening creams wrapped in black plastic bags and estimated to be worth about R78,000,” he added.

The group was arrested. They are just some of a number of people who have been arrested in recent days with large quantities of cigarettes or alcohol.

The sale of these items has been suspended in SA amid the coronavirus lockdown.

They were charged with possession of counterfeit cigarettes, liquor, contravention of the Illegal Immigration Act as well as trespassing, Hlathi said.

“We are delighted to have such men and women who are eager to fight crime. These rangers managed to intercept several suspects before the illicit goods could reach the targeted market,” said Zuma.

The group is expected to appear at the Bushbuckridge magistrate's court on Monday.
Top

They should distribute the contraband amongst the staff

Alcohol and ciggies that is. Not sure what it is about that skin lightening cream being smuggled

I don't know about SA, but in Cambodia, I remember, to find a face cream that wasn't skin lightning was a problem. The white women want to get tanned the "tanned" ones want to be white. We are never content, are we?

"Education is the most powerful weapon which you can use to change the world." Nelson Mandela
The desire for equality must never exceed the demands of knowledge
Top
4 posts • Page 1 of 1

Return to “In the News”