That is the thing, these warriors are funded lavishly as NGOs by other foreign warriors!

It is a bit of an industry, and needs to be self-perpetuating. And of course lots of social media attention and virtue-signalling.

But just my cynical opinion.

Here the update from PMG

Don't worry, you cannot be more cynical than I am

It's a difficult moment to discuss tourism

Thanks, Klippies. But once again it looks as though the "experts" (not mentioned in the roster) were the Blood Lions crowd and nobody from the hunting fraternity? maybe I'm wrong?

- Captive lions in South Africa could face starvation or euthanization as tourist revenues disappear amid the COVD-19 pandemic, according to animal welfare groups.

- Conservationists argue that the pandemic illustrates why exploitation of wildlife is risky: in the case of lions, the big cats can carry both tuberculosis and the feline equivalent of HIV.

Wildlife conservation and animal welfare groups say the COVID-19 pandemic ought to spell the end for one of South Africa’s most controversial businesses: the captive breeding of lions.

It is widely accepted that SARS-CoV-2, the coronavirus that has precipitated the global crisis, came from wildlife (bats or pangolins are the most likely sources), and campaign groups long opposed to lion breeding on an industrial scale in South Africa argue this highlights the risks that humans face by exploiting wildlife for meat or other purposes.

They also say that many of the breeding centers — of which there were 297 in 2016, according to a paper published last year by researchers Vivienne Williams of the University of the Witwatersrand and Michael ’t Sas-Rolfes from Oxford University — rely on tourist income that has now vanished. These centers will now either allow their lions to starve to death or euthanize them — a charge denied by the industry. 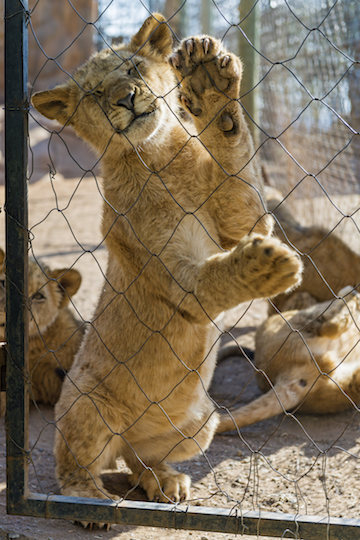 Industry representatives say animal rights groups have destabilized the lion-breeding business by misrepresenting it. Image by Tambako the Jaguar via Flickr (CC BY-ND-2.0)

Outside of zoos, lions are bred and kept in captivity in South Africa for three main reasons: to provide “cub-petting” and “walk with lions” experiences to visitors at theme parks; to be sold to other operations for “canned” trophy hunting; and, when they die or have been killed, to be sold on to countries in East Asia, where their bones are turned into wines and other products for the traditional medicine market.

Some lions go from being cuddled by tourists to being killed by wealthy big-game hunters, before their skeletons are sold into the bone trade. Many NGOs, both within and outside South Africa, have been arguing for more than a decade that the industry is inhumane and should be closed down.

The EMS Foundation has been at the forefront of this campaign, and in an open letter to Barbara Creecy, South Africa’s minister of the environment, forestry and fisheries, published at the end of March, it accused the government of allowing lion breeding to grow out of control. The country now faces a huge challenge over what to do to protect the welfare of an estimated 8,000-12,000 of the big cats, the EMS said.

“Without tourism revenue, and an already appalling welfare record, thousands of captive lions are going to be left to starve,” EMS director Michele Pickover said in the letter. “This is a catastrophe that could have been avoided.”

Separately, an alliance of groups known as the Lion Coalition requested that the World Health Organization (WHO) advise all governments to close down wildlife markets. In particular, it should “unequivocally exclude the use of wildlife, including from captive bred specimens, in the WHO’s definition and endorsement of Traditional Medicine.” Many significant diseases, such as Ebola, MERS and rabies, are transmitted to humans from wildlife, the coalition pointed out.

“Bovine tuberculosis has been documented among wild and captive-bred lions, posing a substantial risk of zoonosis to consumers and people involved in the lion bone trade, particularly those who work in breeding farms, slaughter and processing facilities in South Africa,” the letter to the WHO said.

Paul Funston, regional director of southern Africa for Panthera, the big cat conservation group and one of the partners in the coalition, said the mass breeding of wildlife species in captivity was risky. Disease-causing viruses and bacteria, he argued, had evolved to knock back populations that had become too numerous, and intensive farming of lions could lead to a greater chance of “mutation and transmission to humans.”

Not only are captive lions well-known for harboring bovine tuberculosis, which can be passed to humans, but wild lions across Africa are also infected with the cat equivalent of HIV (known as feline immunodeficiency virus, or FIV). “I’m not saying it is likely to mutate in lions and jump to humans, but it did in gorillas, and they were free-ranging animals that were likely to be as healthy as possible,” Funston said. “We should be taking more care.”

Conservationists also argue that breeding of lions to sell their bones to East Asia is increasing demand, leading to poaching of wild populations. There is evidence that killing of lions for body parts has increased; a study published last year found that the targeted killing of lions in parks on either side of the South Africa-Mozambique border accelerated in the period 2011-2018 (and especially since 2014), but the data show it was mostly for heads and paws, not whole skeletons. 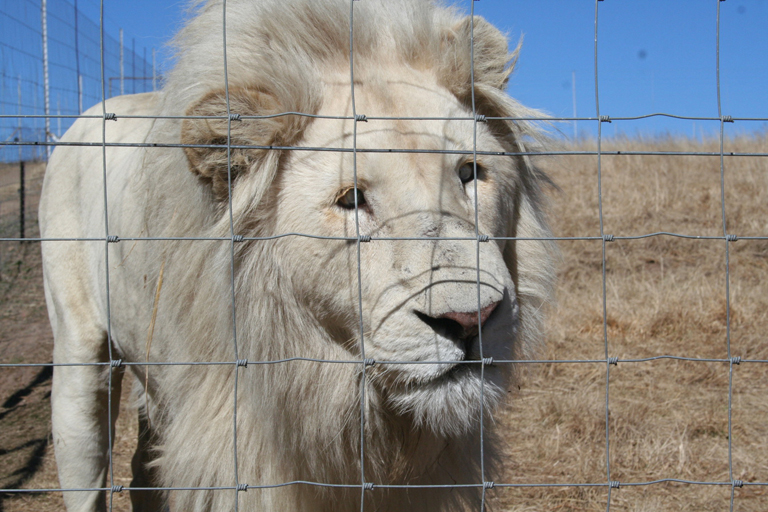 Future of the industry

But ’t Sas-Rolfes, a research fellow at the Oxford Martin Programme on the Illegal Wildlife Trade, told Mongabay in an interview that he did not believe the bone trade was driving the illegal killing of lions in a significant way. “The current threat to large wild felids is killing them for claws and teeth, which are used in jewellery in the Far East, not for their skeletal bones,” he said.

It was possible, ’t Sas-Rolfes added, that some, or indeed many, captive lions might be at risk as a result of the lockdown in South Africa, but that there were also farmers who had other sources of income from which they would be able to cross-subsidize the costs of feeding and keeping their lions.

The South African Predator Association (SAPA), whose stated aim is to establish and maintain “a healthy and profitable predator breeding and hunting industry,” told Mongabay that the threat to the country’s lions was created by animal rights campaigners who, over a number of years, have given a misleading picture of both the conditions in which animals are being held and how they are hunted.

“The end result was a decline in bookings and a severe blow to the conservation-based industry in South Africa,” said chief executive Deon Swart. Captive-breeding of many species of wildlife, including lions, contributes to the economy by supplying them for both consumptive and non-consumptive use, he added.

Mongabay contacted five ranches with captive lions, and received one response, from Christa Saayman of Mystic Monkeys and Feathers. Saayman said the absence of visitors did not pose any risk to her 30 lions because she had other income streams and that she had never, and would never, sell any of them into the bone trade.

Despite the calls from the EMS Foundation and the Lion Coalition, the government has its own plan for dealing with captive lion breeding. Since last year, it has suspended the annual quotas for the international bone trade while a high level panel conducts a policy review. The panel’s recommendations, which are expected by the end of this year, will be crucial in determining the industry’s long-term future.
"Education is the most powerful weapon which you can use to change the world." Nelson Mandela
The desire for equality must never exceed the demands of knowledge
Top

Posted on June 4, 2020 by Team Africa Geographic in the NEWS DESK post series. 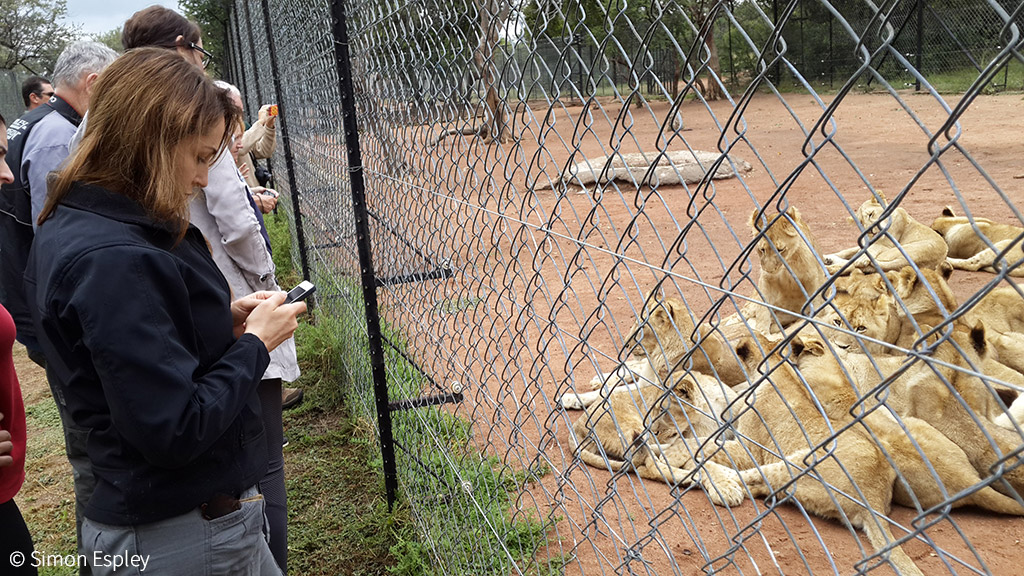 Animal protection groups, NGOs and tourism organisations call on the United Nations World Tourism Organization and the Global Tourism Crisis Committee to use the process of recovery from COVID-19 to phase out all captive wildlife in tourism entertainment. In an open letter penned to the Secretary-General of the UNWTO, Nick Stewart of World Animal Protection calls on the tourism sector to embrace a part of the responsibility to prevent future pandemics and, in doing so, exclude all exploitation of wild animals. It was signed and endorsed by several animal protection groups including Blood Lions, as well as significant travel and tourism organisations such as Airbnb and Booking.com.

The open letter goes on to point out that visits to wildlife tourist attractions may account for between 20-40% of internal tourism globally, and that most involve close contact, hands-on interaction with animals that could pose dangers to human health, especially through the spread of zoonotic disease. The addendums to the letter highlight the fact that most of these animals are exposed to poor welfare conditions and bad treatment, without the practices making any substantive contribution to conservation. Captive wildlife tourism is a known driver of both legal and illegal wildlife trade and often involves the removal of a wild animal from its natural habitat, contributing to significant biodiversity loss.

Stewart writes that a move to phase out captive wildlife attractions and promote responsible wildlife tourism is essential to signalling the pro-active and precautionary approach espoused by the Global Tourism Crisis Committee and that it is the only way to ensure a more resilient, sustainable and equitable tourism sector for the future. He calls on the UNWTO to send a strong message that would “strengthen the image of the sector as a force for good whose benefits will be shared by all sectors of society”. He argues that recovery post-COVID-19 is an opportunity to “grow back better”.

The full open letter and list of signatories can be accessed here.
"Education is the most powerful weapon which you can use to change the world." Nelson Mandela
The desire for equality must never exceed the demands of knowledge
Top

Presented by Lord Ashcroft KCMG PC, to accompany his new book "Unfair Game", this film discloses details of a second major investigation into captive-lion breeding, whereby thousands of Africa's most iconic animals are killed either for the bone trade or as hunting trophies.

Visit http://www.LordAshcroftWildlife.com for more information and to order the book.

Follow Lord Ashcroft on Twitter and/ or Facebook: @LordAshcroft
"Education is the most powerful weapon which you can use to change the world." Nelson Mandela
The desire for equality must never exceed the demands of knowledge
Top
49 posts

Return to “Lions and Other Endangered Animals Management and Poaching”