Having worked on research on Fur Seals, I'm going to refrain from saying too much or else I'll get banned for using foul language.

What is the good of having a nice house without a decent planet to put it on? (H D Thoreau)
Top

“Two things are infinite: the universe and human stupidity; and I'm not sure about the universe.”
― Albert Einstein
Top

I believe that Nature does not repay in a kind way.
When a disaster strikes a country who allows these kinds of cruelty (Japan coming to mind)....
There will be no questions from my side. IMO.

Windhoek - Namibia's annual seal hunt, which will see about 86 000 Cape fur seals slaughtered by end November, starts on Sunday amid outcry from conservation groups that brand it a massacre for trade purposes.

Namibian authorities maintain that what they call seal harvesting is meant to control the burgeoning population which threatens the fishing industry.

But activists slam these reasons as hypocritical, saying the hunts are carried out for commercial gain.

"There is no justification for the killing. This is purely a political and economic issue, with very little concern for animal welfare," conservation charity International Fund for Animal Welfare (IFAW) director for Southern Africa Jason Bell told AFP.

According to the ministry of fisheries and marine Resources, there were 1.3 million Cape fur seals in December last year, but IFAW and others reject the figure because they are not allowed access to records to verify how the animals are counted.

Access is also restricted to the colonies along the Skeleton Coast during harvesting.

According to IFAW, Namibia's commercial seal hunt is the second-biggest in the world after Canada, which has also gained notoriety for the practice.

The offshore Cape Cross breeding colony, some 116km north of the central tourist town Swakopmund, is one of the two reserves where the killings take place, shielded from the media glare.

In the reserves, the seals are rounded up on the beach and hit on the head with spiked wooden clubs, sometimes repeatedly, to effect a deadly blow.

The carcasses are then loaded onto trucks and taken for processing in the factories of seven commercial licence holders.

The animals are harvested for their pelts, fat, which is used in beauty products and male sexual organs, believed to have aphrodisiac properties in Asia.

However, Bell believed that a 2010 ban on seal imports by the European Union would raise awareness and considerably shrink the market for seal products.

Other countries that have also banned seal products include the United States.

"We wish more countries could follow suit, that would be the only way to curb this practice," said Bell.

According to South Africa-based activist group Seal Alert SA, Namibia is the only country that allows the hunting of nursing baby seals that still depend on their mothers, which disrupts the breeding process.

"We are concerned that nursing baby seals get killed and that is illegal by any norm," said director Francois Hugo.

The Namibian government has repeatedly rejected the allegations.

Last month the country's ombudsman turned down Seal Alert's bid, launched last year, for an immediate interdict against the slaughter.

The ombudsman's office said it did not have a mandate to recommend to the government to stop the culling, and that seals were not threatened with extinction under the Convention on International Trade in Endangered Species of Wild Fauna and Flora (CITES).

It added that harvesting was lawful and permissible under the country's Marine Resources Act.

Namibia is the only country in the southern hemisphere that is commercially hunting seals, according to Seal Alert SA.

- SAPA
Sometimes it’s not until you don’t see what you want to see, that you truly open your eyes.
Top

Disgusting is a euphemism!

(Fluts, can we link these petitions to our FB page, please?)
“Two things are infinite: the universe and human stupidity; and I'm not sure about the universe.”
― Albert Einstein
Top

I believe that Nature does not repay in a kind way.

I live by this belief. The wheels they are a turning.... They turn, slowly but surely. Perhaps not today, perhaps not tomorrow, but turn it is going to turn. (I do not wish doom and gloom on anyone, but that's the law one should live by and measure your deeds by).
“Two things are infinite: the universe and human stupidity; and I'm not sure about the universe.”
― Albert Einstein
Top

Over the next four months, thousands of fur seals living in Cape Cross and Atlas Bay will be brutally killed for their fur, oil, and genitals.

Namibia, where seals are listed among the most important commercial marine species, has set an annual hunt quota of 80,000 Cape fur seal pups and 6,000 bulls.

As of today, some 80,000 Cape fur seal pups will be beaten to death after being violently separated from their mothers and herded for cruel slaughter. Pups, still nursing, will be hit in the skull and throughout the body. Then, whether they are still alive or dead, they will be stabbed in the neck and slashed open with knives in the middle of the screams of their mothers.

An additional 6,000 Cape fur seal bulls are killed for their genitalia (thought to be an aphrodisiac in some cultures.) Most of this is exported ultimately to Asia.

The massacre of Cape fur seals is brutal for a number of reasons, including the method of killing and the effect it has on the entire colony.

Once the men have a group of seals under their control, they let the group try to escape to the sea while clubbing them. They aim for the seals’ heads and try to stun them. In this panicked scene, with pups crying and terrified, trying to escape, clubbers often miss the seal pup’s head or hit the head with inadequate force to stun the pup. The clubbers, therefore, hit the pups repeatedly as they try to stun them. After they stun them, they stab the pups in the heart, still in front of the other pups and near the rest of the colony. Sometimes the pups have not been completely stunned or they regain consciousness as they are being stabbed (source: harpseals.org)

The hunting season runs 139 days, from July through November, giving the animals little respite. Sealers target larger pups and allow the smaller, thinner ones—those with poorer chances of survival—to get away. This can weaken the long-term genetic vigor of the populations.


Hunting permits are issued by the Ministry of Fisheries and Marine Resources, which “accuses” the fur seals of depleting fish stocks.
The pups are killed mainly for their fur, but also for their blubber, which, like harp seal blubber, is sold as a ‘health food supplement’. The bones will be used in jewelry and skins to make boots and other luxury items.

Hatem Yavuz, a Turkish-Australian fur dealer, is one of the main license holders. 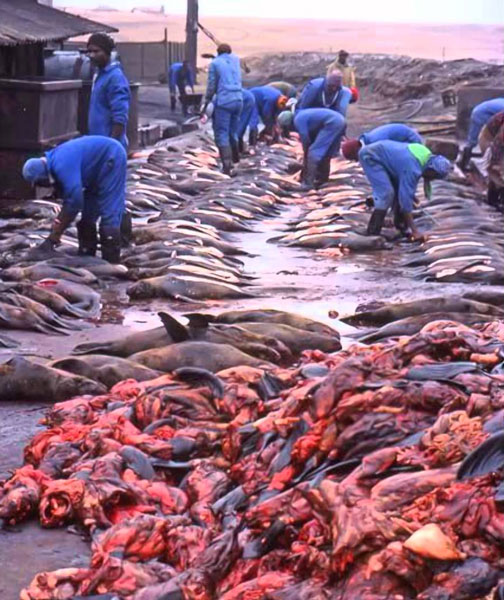 Hatem Yavuz, known as the butcher of Namibia, is responsible for the death of these hundreds of thousands of sea lions.

Yavuz resides in Australia and its fur processing plant is located in Turkey. Yavuz controls 60 percent of the fur market in the world.

Since Turkey is not part of the European Union (whose members are prohibited from importing and exporting products derived from seals), skins are shipped from Namibia to Turkey where they are processed and sold to countries such as China and Russia.


An additional 6,000 Cape fur seal bulls are killed for their genitalia (thought to be an aphrodisiac in some cultures.)