LÜDERITZ – The population of horses in the Namib-Naukluft Park and the Tsau //Khaeb Sperrgebiet) National Park is steadily increasing due to a management plan that was launched at Lüderitz on Friday by the Ministry of Environment and Tourism, its partners and stakeholders.

The plan is designed to maintain a viable and healthy horse population that contributes to improved community livelihoods and economic development for the the country.

The plight of the wild horses have been of great concern to horse lovers as their population continued to drop. In the 1980s, the population of the horses was estimated at around 160 animals.

The horses were under threat of extinction as their population was drastically reduced due to predators,particularly hyenas that target the foals, with only 77 horses recorded in May 2019.

The Namibia Wild Horses Foundation strongly believes the horses are teetering on the brink of extinction as there are no chances of survival for the foals as long as the hyenas are around. The hyenas are also targeting the adult horses. The foundation wanted custodian of the horses.

Mannfred Goldbeck, chairman of the Namibia Wild Horses Foundation, told Gondwana Collection in November last year: “The Foundation is waiting anxiously for the Ministry of Environment and Tourism to respond to our request for custodianship of the horses.

“We need to implement measures urgently to safeguard their future. We have been trying for several years to engage the ministry, without success. The situation is now an emergency. We urge the ministry to commit to a plan of action so that we can save the remaining population.”

On Friday, however, the wild horse population was put at 79.

“As a ministry we had to come up with a plan to ensure that these horses survive despite the harsh conditions they are living in,” Shifeta said when he launched the ministry's new plan.

Some community members had suggested that the horses should be relocated to private farms as a means to mitigate the situation, but the ministry was reluctant to authorise that.

Shifeta explained that the ministry took cognisance of the interests of the Aus residents and other people living near Tsau who derive benefits through tourism.

“What attracts more tourists are these horses. Therefore their presence there [in the park] has economic value to that area.

Which is why we have decided to come up with a plan to manage these animals properly and to make sure they survive,” he said.

The minister also extended gratitude to ministry staff who camped at the observatory posts and looked after the horses while keeping predators such as hyenas at bay.

“The hyenas are forever gone now, I'm saying forever because for certain months we have not seen the hyenas,” he noted.

The separation of the hyenas from the horses, Shifeta said, is an indication that the plan is working.

“The hyenas are forever gone now, I'm saying forever because for certain months we have not seen the hyenas,”

Where have the hyenas gone

It is not a game park. It is known for the flora, minerals and sand formations as far as I know. Of course there are the animals which normally live in places like that e.g. gemsboks, springboks and on the shores seals and wetland birds....and also hyenas

I think the Hyenas are Brown, not spotted.

Might take the odd foal, but probably not an adult horse.
Top

The Wild Horses of the Namib
Avatar of koney - 17. January 2020 - Environment

The wild horses of the Namib Desert have become synonymous with the rugged, wild beauty of Namibia. Photos: Teagan Cunniffe
Ron Swilling

‘There’s something about the outside of a horse that is good for the inside of a man.’ (Winston Churchill)

There’s little to compare to a wild horse thundering across the plains, the wind whipping at its mane and dust exploding under its hooves...

Wild horses evoke a feeling of unbounded freedom. They pull on our heartstrings and lift our spirits. Namibia’s small population of wild horses do just that as they canter to the waterhole to quench their thirst in the vast and sandy swathes of the Namib Desert.

Living in accordance with the land and its seasons, this hardy century-old population of wild horses resides in the Namib Naukluft Park near Aus in southern Namibia. Like virtually all the pockets of wild horses on the planet (except one), the Namib horses originated from domestic stock.

The horse, Equus caballus, adapted through its long evolutionary history to run swiftly on long legs across wide open plains. Horses lived a wild existence before they were domesticated on the Eurasian steppes approximately 6000 years ago. Since then, horses have been in service to humankind and have paid a high price. They were used for exploration, transport, industry and war, and more recently for recreation. Civilisation was carried on the horse’s back until the motorised world put them, literally, to pasture.

For many years the origins of Namibia’s wild horses were shrouded in mystery until research revealed that the core of the population originated from the Kubub stud farm, where they were bred for the Lüderitz racetrack and surrounding diamond fields. Abandoned during the tumult of World War I, they followed the seasonal water sources until they reached Garub, 30km away, where a borehole maintained for the steam trains provided a permanent source of water in the desert. Here they met up with a smattering of military horses that remained after the Union of South Africa base at Garub was bombed by retreating German troops.

The horses found refuge in the prohibited diamond mining territory, the Sperrgebiet. They remembered their ancient roots and reclaimed their freedom, forming family groups and existing with all the natural dynamics of horses in the wild. Finding themselves in the waterless expanses of the Namib Desert, they adapted their behaviour to drink less regularly, tolerating a certain amount of dehydration, something that would be extremely stressful to a domestic horse.

In the late 1980s a section of the Sperrgebiet, which included the Garub waterhole, was incorporated into the Namib Naukluft Park. Several years later a viewing hide was built overlooking the waterhole at Garub, 25km from Aus. Gradually, the public became aware of the horses. After Namibian independence in 1990, the wild horses became one of the main attractions on the tourist route in southern Namibia. They have since become synonymous with the rugged, wild beauty of the country.

The nearby family-owned Klein-Aus Vista Lodge, part of the Gondwana Collection Namibia, acts as their guardian in the area, keeping a close eye on the population and providing assistance when needed. The spirit of the Namib wild horses radiates from the warm interior of the lodge’s reception area and restaurant, with exquisite photos adorning the walls and rearing horses decorating the dinner tables.

Klein-Aus Vista works in conjunction with the Namibia Wild Horses Foundation, established in 2012 to monitor the wild horse population, coordinate support and administer funds generously donated by the public to provide supplementary feed for those times when the horses need a little bit of help from their friends.

Now in their tenth generation, the wild horse population is familiar with the regular cycles of abundance and drought that prevail in the desert. It has seen years of plenty, when rain blesses the desert and green grass blows in waves across the desert floor, and it has persevered in years of drought, which have tempered its gene pool and kept numbers low according to the carrying capacity of the land. During these more severe periods, the horses persist until the rain returns and new grass emerges, at which time they rapidly gain condition.

This has been the case up until the most recent drought which broke last year, and the horses would have responded as they had done in the past, with the old and sick succumbing and the middle group enduring. But, in 2012 an unforeseen factor entered the Garub arena, a clan of spotted hyena. Over the subsequent years, wild horse numbers plummeted from 286 to a mere 73 individuals, as the hyenas predated on the horses, putting the population in jeopardy. Not one foal survived as the horses were targeted one after the other.

During this period the foundation began a series of talks with the Ministry of Environment and Tourism (MET) to convey the seriousness of the hyena predation and to look for solutions to safeguard the future of the population, proposing a custodianship initiative to allow the foundation to relocate and care for the horses.

At the beginning of 2019, when it appeared that the population of Namibs was in its final hour, with no solution in sight, there was a massive outcry from the Namibian public and horse-lovers across the globe. The dire situation prompted Minister of Environment and Tourism, Minister Pohamba Shifeta, to personally step in, and for the ministry to remove several of the hyenas from the clan. This was countered by wildlife groups opposing intervention in the national park and culminated in a discussion by various groups at a well-attended meeting held in Windhoek.

As the year progressed, and without predation by the hyenas, new born foals managed to survive for the first time in a six-year period. Eight foals have been born to date. All eyes watch them in wonder. They give us hope that this special population of horses will continue to grace the Namib Desert, to be buffeted by the wind and warmed by the intense desert sun, running free over the vast Garub plains.
Top 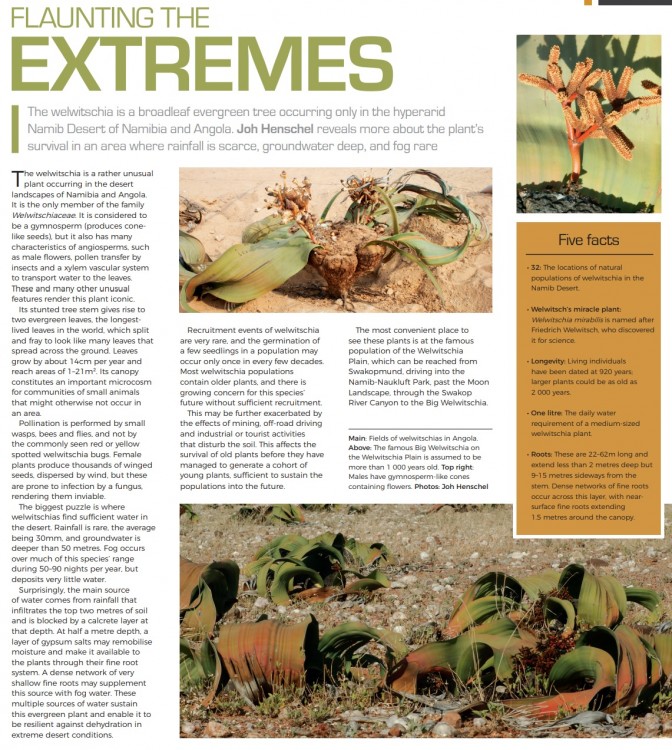