Information and Discussions on Management Issues in SANParks
13 posts

mountain national parks, I lost my job because I exposed management after muggings and people drowning at Rhodes memorial dam,to cover up his dirty work. If someone can assist me to expose them and let justice be served. Would like to make it public and on the special assignment Channel. Contact me on 0716194066,email alfridoa@gmail.com
It because of mismanagement and corruption that visitors are losing there lives in the table mountain national parks.


A call on all sanparks rangers, now is the time to raise your voice and speak up, about mismanagement, corruption, unfair labour practice inside the sanparks organisation, contact me as the case are with the public protector let's do the right thing, to speak up for the truth and what's right. Don't fear God will protect us, as He said, "the truth shall set you free". Please share to everyone 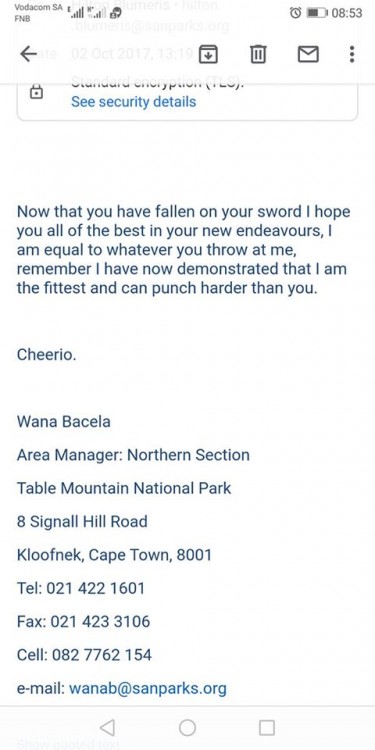 not according to communication protocol, I think


Is Dixon a whistleblower or a disgruntled fired ranger

I am smelling a rat

Interesting
Next trip to the bush??

Wonder what's going to happen next


A former SANParks employee Alfrido Dixon, who was based within Table Mountain National Parks, has called out his ex-employer for alleged mismanagement of the reservoir, Rhodes Memorial Dam.

In a Facebook post, Dixon states that he was unfairly dismissed “because I exposed management after muggings and people drowning at Rhodes memorial dam.”

Speaking to Cape Talk, Dixon also alleged that the lack of security contributed to drownings, muggings, drug deals and a rape. He claimed that a drowning in 2016 was “covered up” and that “they opened the dam without seeing that it’s safe for the public.”

SANParks has responded to these claims in a statement.

South African National Parks (SANParks) would like to set the record straight regarding various allegations made by a former employee, Mr Alfrido Dixon on a number of media platforms and social media.

Dixon has alleged, amongst other things, that he was dismissed from the employ of SANParks for lifting the lid on mismanagement that led to drownings and muggings at Rhodes Memorial Dam in the Northern part of Table Mountain National Park (TMNP).

“In fact his dismissal was due to failure from his part to adhere to SANParks procedures in respect of social media engagements as well as failure to make use of mandatory grievance procedure,” said Regional General Manager for the Cape, Norman Johnson.

He said Dixon’s conduct and malicious statement made against SANParks and its management at TMNP has put the organisation into disrepute “…particularly when he had failed to exercise his right to appeal his dismissal or approach the CCMA for any recourse since 2017.”

According to Johnson, the Rhodes Memorial Dam is a water catchment dam that has been in existence for a number of years, and is used as a water storage for fire suppressions efforts and was never intended for a recreational use including swimming. The dam also plays an important role in terms of the City of Cape Town’s storm water management as it traps excess spring water from the mountain.

“The area surrounding the dam is fenced off to deter the illegal use with additional signage erected near the dam directing users to the Newlands Picnic area where access is regulated, but despite all these efforts, the fence and signage has been vandalised on numerous occasions and the dam has been accessed illegally.”

He said persons have entered the dam illegally and mostly after hours, despite signage indicating that there are no lifeguards on duty and swimming is prohibited.

“We can confirm that from 2016 to date there has been four drownings that occurred at the Rhodes Memorial Dam and all the case were recorded with the South African Police Service, Rondebosch Station… thus, the cover up allegation made by Mr Dixon is simply malicious and untruthful.”

Members of the public are again urged not to use dam for swimming purposes and the public is further encourage to report illegal usage directly with its management on 021 712 0527.

According to Cape Talk, Dixon said that the issue is currently before the Office of the Public Protector and that he essentially wants his job back.
Top

SANParks are always happy to shoot the messenger. However they are right that he should have approached the CCMA. This all sounds very personal and unprofessional.