National lockdown tightens its grip on game reserves and their staff

National lockdown tightens its grip on game reserves and their staff

Game reserves rely on income generated by local and international tourists, but with lockdown restrictions, those funding streams are no more. Communities bordering the reserves have also found themselves in a precarious position.

When David Boshoff and his anti-poaching team found an ensnared lion at the Dinokeng Big Five Game Reserve in northern Gauteng, the reality of what could happen over the next few months hit home. “It was terrible to see that this male lion in the prime of his life had died slowly over days,” said Boshoff.

The national lockdown has affected every sector of the economy and wildlife reserves like Dinokeng, and even the Kruger National Park are no exceptions.

Game reserves rely heavily on income generated by local and international tourists, but with the lockdown, those funding streams have all but dried up, leaving reserves wondering how they will survive. Communities bordering the reserves, many of whom would normally rely on the reserves for employment, have also found themselves in a precarious position. 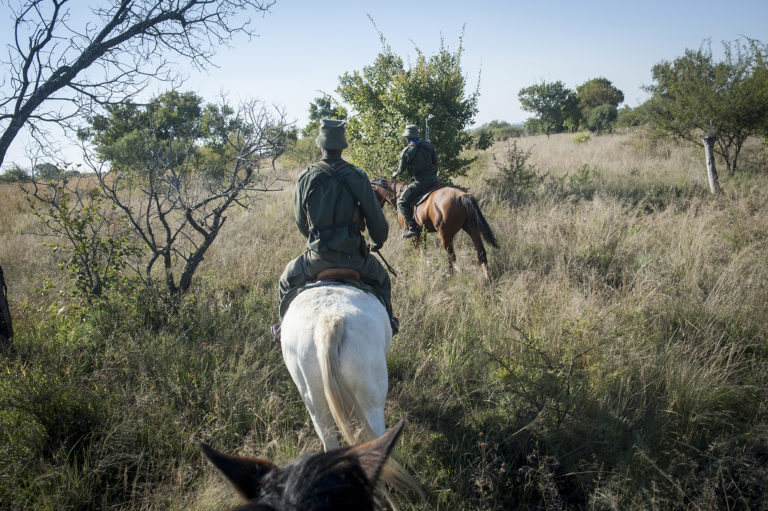 Members of the Dinokeng Game Reserve Anti Poaching Unit (APU), are seen on horseback patrol. Due to Covid 19 lockdown, an increase in poaching activity has occurred as hungry communities turn to ‘bush meat’ to survive. The Big 5 Game Reserve, situated in Hammanskraal, Northern Gauteng is under immense financial strain. It has had zero income since the lockdown was enforced. Management fears possible closure of the reserve should the lockdown continue for another few months. 12 May 2020. (Photo: Shiraaz Mohamed)

Both are now looking at other means to survive. For hungry families, that may mean setting snares to provide “bush meat”, and for reserves, it means finding income sources to keep anti-poaching units on the ground while also paying staff salaries. 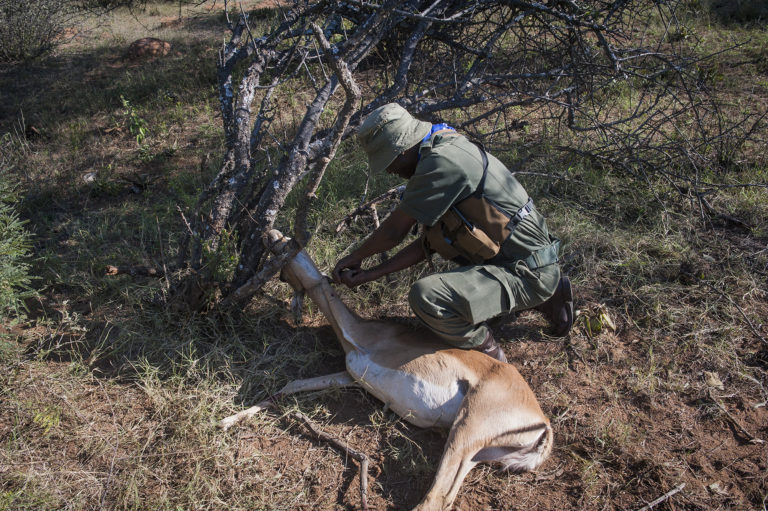 A member of the Dinokeng Game Reserve Anti Poaching Unit (APU), removes an Impala from a snare set up by poachers. Due to Covid 19 lockdown, an increase in poaching activity has occurred as hungry communities turn to ‘bush meat’ to survive. Photo: Shiraaz Mohamed)

“In an effort to keep costs as low as possible, we are rotating our staff by putting some of them on short leave,” said Boshoff, the general manager at Dinokeng. “We are exploring all avenues for income, we have applied to the Covid-19 relief schemes, but we will wait and see. This is a time of the year when there are normally holidays and we are fully booked.

“For now, we were lucky to receive R500,000 to help towards our salaries from the Kevin Richardson Foundation, as well as R630,000 from the Oppenheimer family, paid to our employees over 15 weeks. Although it is helping, it is still not enough to cover all our overheads,” Boshoff said. 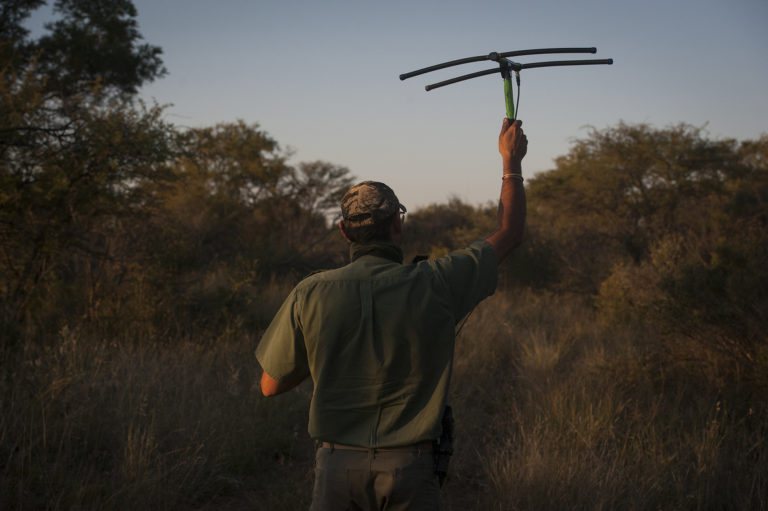 A Ranger from the Dinokeng Nature Reserve is seen tracking wildlife with a satellite collar tracing device in the Dinokeng Game Reserve. The Big 5 Game Reserve, situated in Hammanskraal, Northern Gauteng is under immense financial strain. (Photo: Shiraaz Mohamed)

Richardson, also known as “the Lion Whisperer”, used his popular YouTube channel to raise R2-million that is being used to buttress communities’ reserves and the reserves themselves.

The video received more than 190,000 views and saw thousands of people from across the globe raising funds in an effort to do their bit during the pandemic, and also to help the South African wildlife sector.

“When I heard government was going to lock down the country, I immediately began to think of the impact that this was going to have on us,” said Richardson. “But I could not stop thinking about what was going to happen with the Dinokeng Game Reserve. Our sanctuary forms part of the reserve and I was concerned about all of the animals and the staff that takes care of them.” 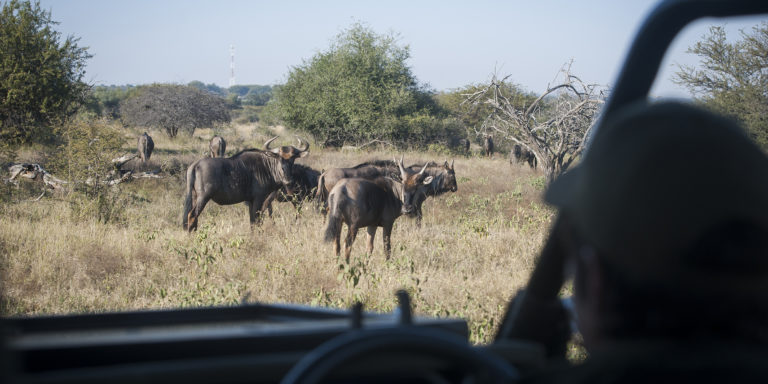 Richardson, through his foundation, decided to start the campaign #DoWhatYouCan to raise funds to support the staff at the reserve and help feed children who often receive their only meal at school. Partnering with the Southern Lodestar Foundation, donors can provide a nutritious and sanitised meal for just R1.30.

“I am pleased to say that we received tremendous support from our community who are using their love of wildlife for social action,” said Richardson.

“Now more than ever it is apparent that the health of humans and the natural world are interdependent. It humbles me that we were also able to send out almost a million meals in the last month and help pay reserve staff salaries. We hope to be able to continue to help, month to month until we find some reprieve from this crisis.”

Richardson’s help was a lifeline for Boshoff and the reserve, but they are by no means out of the woods.

“If the lockdown continues for a longer period, we will have serious financial problems. If there is no income, a business closes down, but what of our wildlife? If this continues for the next few months, we will be forced to close our gates as a last resort.’’

Meanwhile, the reserve’s anti-poaching units have noticed a surge in snares laid down in recent weeks.

Tim Higgs, head of Dinokeng’s anti-poaching unit, said the lockdown had forced more people to sit at home with no income.

“This means normal hardworking people are forced to look at alternative means to feed themselves and their dependents. They turn to subsistence poaching, or poaching and selling meat to other people.

“We have the normal rangers force deployed, but because of the increase in poaching activity, they are working under increased pressure. Anti-poaching unit rangers are motivated, but the financial insecurity has a negative effect on their frame of mind since they have families who are dependent on them,” said Higgs. 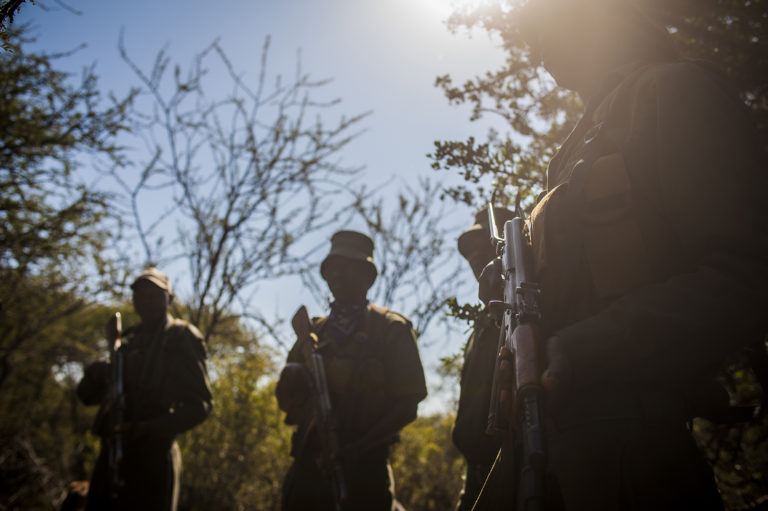 Members of the Dinokeng Game Reserve Anti Poaching Unit (APU), are seen on patrol. Due to Covid 19 lockdown, an increase in poaching activity has occurred as hungry communities turn to ‘bush meat’ to survive. (Photo: Shiraaz Mohamed)

“We were all satisfied and complied with the first lockdown to flatten the curve. Now it seems ridiculous as people are losing their jobs and companies are closing their doors. How can you set regulations to protect 0.02% of the population when the rest of the population is suffering?” asked Boshoff. DM

https://www.dailymaverick.co.za/article ... ir%20staff
"Education is the most powerful weapon which you can use to change the world." Nelson Mandela
The desire for equality must never exceed the demands of knowledge
Top

very bad situation and for tourism there does not seem to be much light on the horizon if any .If .gov follow their plan its going to be way too long for these reserves to survive without income and .gov seems to be sticking to ridiculous decisions like they have actually though about the long term implications.
Top

Think the tourism industry will be hit the hardest and i don't see many companies survive if this could carry on for another 4 months
Next trip to the bush??

The economy was bad before the pandemic, afterwards it will be non-existing if they do not find a way to open up

This is a good way to channel aid from the big foreign trusts!

They have a lot to do at home, for the time being, I think

"Education is the most powerful weapon which you can use to change the world." Nelson Mandela
The desire for equality must never exceed the demands of knowledge
Top
6 posts • Page 1 of 1

Return to “Other Conservation Issues”