The Makgadikgadi Pans National Park covers an area of 4,900 sq. km but the pans outside the national park are the largest salt pans in the world exceeding 12,000 sq. km. Lying southeast of the Okavango Delta and surrounded by the Kalahari desert, Makgadikgadi is technically not a single pan but many pans with sandy desert in between.

The area was once a superlake almost 30 metres deep, over an area of 80,000 square km. The climate changed and 10,000 years ago Lake Makgadikgadi was well on the way to drying up. As the water evaporated, huge glistening salt-encrusted pans were left. These pans look as flat as a billiard table and stretch as far as the eye can see. Occasionally, this extraordinary landscape is dotted with rocky outcrops and large stranded sand dunes. It was proclaimed a game reserve in 1970 and in 1992 its boundaries were extended and it was given National Park status. 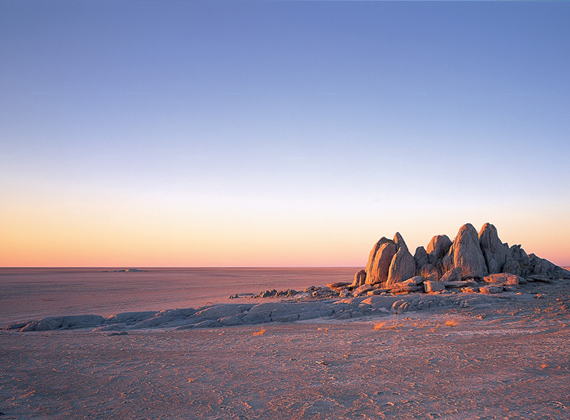 The Makgadikgadi Pans National Park includes a portion of these enormous Makgadikgadi Pans, which are almost devoid of human habitation. However, villages on the periphery and in between the pans is evidence that the area has supported people as far back as the stone age. Today the area contains large numbers of animals who migrate to grasslands in the west of the park after the rains.

The rainy season attracts a spectacular array of water birds and dramatic migrations of wildebeest and zebra. The rains usually begin in November and end in about March. The pans can retain water until April or May. The area is transformed as grasses sprout and the salt pans fill with algae soup. After the rains birdlife is spectacular and flocks of flamingos in their thousands descend upon the pans. The surface of the pans turns a deep pink from 30,000 breeding pairs of these birds.

The best time to visit the area for game viewing is from April to November when great numbers of antelope, wildebeest and zebra move from the south-east pans towards the Boteti River in the west, where rain is expected to fall in November.

These baobabs, called Baines’ Baobabs stand as sentinels in this flat landscape. 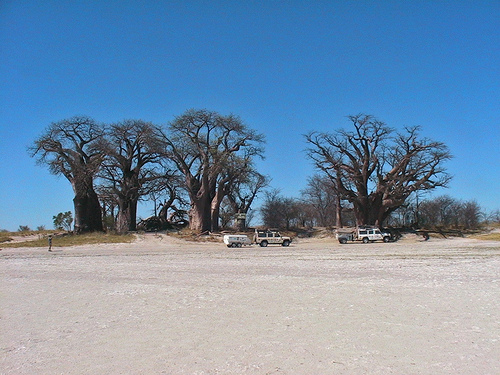 There are two camping sites within the park. The first is Njuca Hills (26 kilometres south of the main entrance gate) where two camping sites afford visitors the opportunity to witness large migrations of zebra and wildebeest during the onset of the rains. There is no water available at this site.

Kumaga, 48 kilometres southwest of the main entrance, is situated on the banks of the Boteti River and is equipped with an ablution block and water standpipe.

The use of an anti-malarial prophylactic is strongly recommended and a 4x4 vehicle, carrying emergency water and food, is necessary. 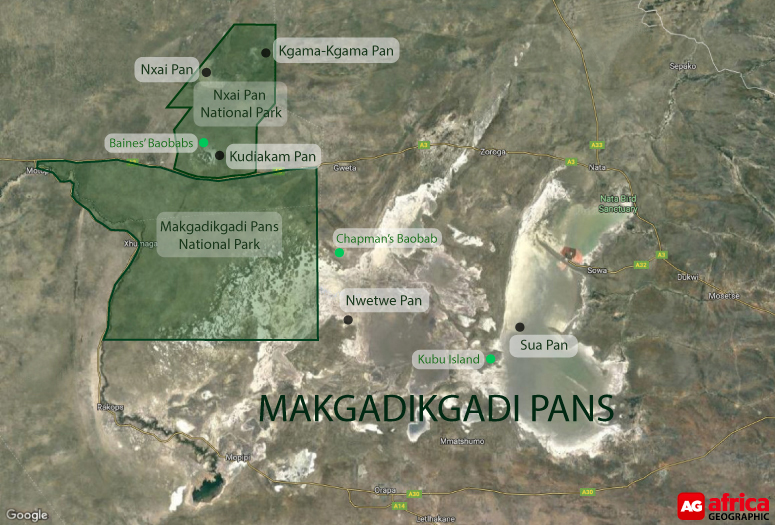 Just click on the title to read all about it

"Education is the most powerful weapon which you can use to change the world." Nelson Mandela
The desire for equality must never exceed the demands of knowledge
Top
2 posts • Page 1 of 1