Seems that Gorongosa is having a revival the last few years

At a certain moment it was almost without animals.
"Education is the most powerful weapon which you can use to change the world." Nelson Mandela
The desire for equality must never exceed the demands of knowledge
Top

Good news for a change!

Gorongosa National Park (PNG) has seen a 60 percent increase in tourists since the announcement in December 2016 of a cease-fire in clashes between government forces and Renamo’s armed wing, an official source said.

“The situation is positive. We have many domestic and foreign tourists wanting to visit the park ” said Patrícia Guerra, Director at Gorongosa Business Club, on the sidelines of the preview of the documentary ‘On the Front Line: The Rangers of Gorongosa National Park’.

While highlighting the increase in the number of visitors during the last 18 months, the director of PNG was quick to outline challenges such as the state of access roads.

The park is also placing itself as a centre for scientific investigation into animal life, attracting researchers and students from various parts of the world.

“We have teams that come to the PNG every four or six months, from palaeontology to ethology, mammals large and small. We have a wide scope,” she added.

The Mozambican Defence and Security Forces and the armed wing of the main opposition party, the Mozambican National Resistance (Renamo), exchanged shots in the centre and north of the country in 2016 until the first truce announced by the late party leader, Afonso Dhlakama in December.

Hostilities resulted in an unknown number of people, with attacks on buses, trains and other civilian targets, damaged the economy in the affected regions and sparked a refugee crisis, while Renamo and the ruling Mozambican Liberation Front (Frelimo) party exchanged mutual accusations of political persecution and assassination.

The clashes erupted after Renamo refused to accept the results of the 2014 general election, demanding to rule in the six provinces where it claims victory in the ballot.

A revision of the constitution to permit greater decentralisation was approved on Thursday by the Mozambican parliament as part of the continuation of a negotiation process initiated by the Mozambican head of state, Filipe Nyusi, and the late Renamo leader.
Source: Lusa
http://clubofmozambique.com/news/gorong ... ozambique/
Please check Needs Attention pre-booking: https://africawild-forum.com/viewtopic.php?f=322&t=596
Top

Seems that Mozambique is making progress in several areas lately

Following the successful translocation of a pack of Wild Dogs to Gorongosa National Park during 2018 and 28 pups later, the team is doing it again. Pilots Raymond Steyn and Tim Webster Pilatus PC-12 Centre Southern Africa are on their way to Khamab with Cole Du Plessis from the Endangered Wildlife Trust. The dogs will be darted first light tomorrow morning, Thursday 31 October, and loaded into a Cessna Cararavan for their long journey. All the best to the entire team! We hope to see some more of these gorgeous pups in Gorongosa.

Wild Dogs loaded and ready for their journey from the Kalahari to Gorongosa National Park. Flying in style in a Cessna 208 Grand Caravan.

It must be stinking in that small plane 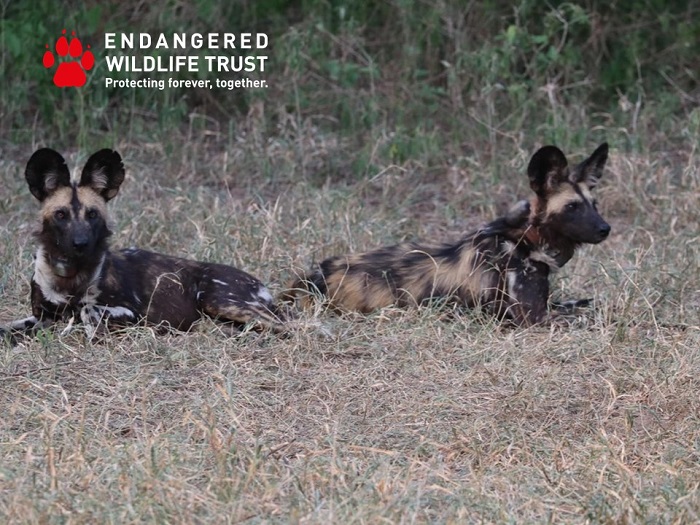 Thanks to a huge restoration effort implemented after Mozambique’s brutal civil war that destroyed most of the country’s wildlife, Gorongosa National Park is now an extensive protected area with an abundance of game. The restoration of Gorongosa – funded by entrepreneur and philanthropist, Gregg Carr – has been a huge effort involving national government, including the recruitment of more than 270 field rangers, and a lengthy recovery period for the Park’s fauna and flora. Even so, more effort is required to bring back most of the area’s apex predators, including the African Wild Dog.

To this end the Endangered Wildlife Trust (EWT) teamed up with EKZN Wildlife and Wildlife ACT, in 2018, to relocate a pack of 14 African Wild Dogs from Zululand to Gorongosa National Park. Following a successful bonding between the male and female dogs of the newly formed pack, these African Wild Dogs were released into the reserve. They thrived from the outset, with both the alpha and the beta females falling pregnant and giving birth to a total of 18 pups. In addition, a third female, together with three males, split from the pack and produced an additional 10 pups. All 28 pups survived the six-month mark and the African Wild Dog population tripled in the space of a year.

However, a reserve of this size requires more than one African Wild Dog pack to recreate a resilient and viable population, and to consider their restoration into the area a success. A second pack, with unique genetics, was urgently required to bolster restoration efforts. Working closely with our conservation partners – including the Carr Foundation and the Bateleurs – the EWT sourced a pack of 15 Wild Dogs from the Kalahari Desert in South Africa.

On 29 October 2019, the vision of a more resilient population became a reality as our team assembled just before sunrise at a boma in the Khamab Kalahari Game Reserve to sedate a second pack and airlift them to Mozambique. The difficulty of capturing 15 African Wild Dogs cannot be underestimated. Fortunately, the EWT’s team included Dr Rowan Leeming – a veterinarian renowned for his African Wild Dog knowledge and experience – who was able to safely and quickly immobilise all the individuals. Taking off safely from the Kalahari, the flight stopped to clear South African customs at Polokwane, before the two-and-a-half hour flight to Gorongosa. Fortunately, customs officials met the flight as it landed at the dusty Gorongosa airstrip ­– expediting the import process – before rushing the Wild Dogs into their new holding boma with the help of Gorongosa’s rangers, and they could be woken from their 10-hour journey. In a matter of minutes, the pack were on their feet and greeting one another in their new home. “It was then that the realization of this momentous occasion sank in,” says the EWT’s Wild Dog expert, Cole du Plessis. “These African Wild Dogs are the pioneers that will restore Gorongosa’s Wild Dog population and set a blueprint for future restoration projects.” He adds, “this species is still considered Endangered, but success stories such as this bring hope for their preservation.” 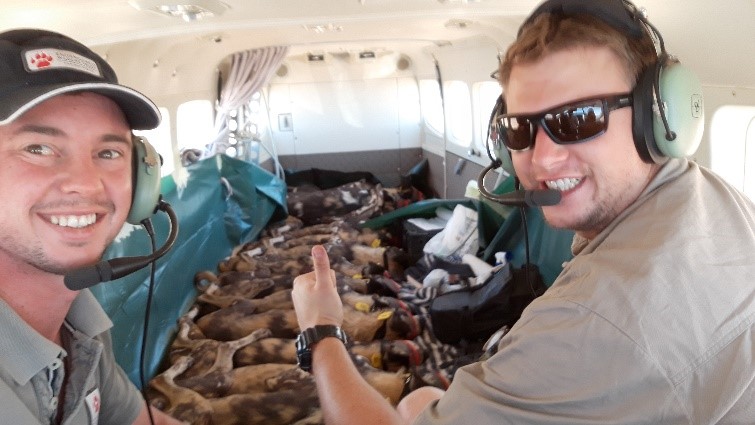 The EWT is grateful to our partners who have made these reintroductions possible, including Khamab Kalahari Game Reserve, Gorongosa National Park, WAG-SA, the Bateleurs, Wildlife ACT, EKZN Wildlife and North-West Parks and Tourism.
"Education is the most powerful weapon which you can use to change the world." Nelson Mandela
The desire for equality must never exceed the demands of knowledge
Top

You are doing a great job