Africa Wild's stance on proposed hotels in our National Par

The management of Sanparks has embarked on a massive commercialization drive which we believe will undoubtedly change the face of our National Parks forever and that in their commercialization drive, the fundamental mandate given to them to protect these national parks and the flora and forna found therein has taken a back seat.
SanParks has identified two sites for luxury hotels in the already congested southern area of Kruger National Park, a 220 bed hotel near the Malelane gate and a larger 550 bed hotel in Skukuza camp.
The site chosen for the Malelane hotel completely ignores basic conservation ideals. It is one of the very few sites where the highly endangered Swazi Lily grows, is adjacent to a nesting sFri Apr 20, 2012 10:36 amite of the endangered Pels Fishing Owl and is an area where animals benefit from the minerals found in the sodic pans. Not to mention the effect the congestion will have on animals and birds in the area.
Our parks are not intended to be holiday resorts, but rather places of quiet and solitude where man can experience Africa as it once was.
Allowing SanParks to pursue this senseless plan would signal the end for these magnificent areas.
Top

SANPARKS are the appointed custodians of our heritage – the Kruger National Park.

They are a schedule 3A public entity and is controlled by the NEMBA Act no. 57 of 2003 as well as the National Parks Act.

SANPARKS is primarily involved in Nature Conservation as well as the Tourism and Hospitality business.

SANPARKS do not own the National Parks of South Africa they belong to the public of our country. They are the trusted appointed custodians of our Parks.

The KNP area was proclaimed a Game Reserve by Pres. Paul Kruger in 1898, the two areas were proclaimed a National park in 1926.

During 1928 the then South African Railways applied to build a hotel during 1928, fortunately the then National parks Board rejected the application.

Development started after the end of WWII, with state assistance the development of tourism facilities and infrastructure commenced in 1981 which developed the KNP into what we have today – an area that we know today, that we appreciate and respect.

1.2 million Visitors visited the KNP during the year ending March 2007.

The number increased to 1.386 million for the period ending March 2010.

SANPARKS make mention in their Tourism management Plan for the period 2007 – 2011 that the KNP is not only one of the worlds’ largest game conservation areas, it is also one of Africa’s iconic attractions. Which has contributed to the development of the Southern African Tourism Industry. It is world-renowned tourism destination and conservation area – the pride of many South Africans and many non-residents.

SANPARKS managements are now of opinion that the tourism infrastructure should be upgraded to the norms of the South African Grading Council despite recent surveys indicating that 85% of the visitors to KNP have indicated that the area should remain as is. Visitors have the need for a nature experience.

SANPARKS Board have now without surveys, seen an opportunity to build a for four star, 119 room hotel at the confluence of the Timfenheni Creek and the Crocodile River within the borders of the KNP, As well as a further larger hotel in Skukuza, the main camp of the KNP. There will also be further development of which details would not be disclosed; however, there is talk of four more hotels after the mentioned two, there was also talk about the privatization of the existing rest camps, however this had been denied by the CEO of National Parks in communications with myself. Hunting in the Park is also mentioned by members of the public who say that they have such information.

There presently are seven concession areas in the KNP which offer luxury accommodation, the occupancy level being <40%.

Although now denied SANPARKS have previously indicated that they are planning these hotels to make them less dependent of state funding which is on the decline. Government funding for the year 2009 – 2010 amounted to R190 633 000.

The KRUGER NATIONAL PARK is a Nature Reserve not a holiday resort.

The main attraction to a National Park should always be Nature and never its facilities. This seems to have undergone a drastic change from Conservation first and anything else should follow.

It is on record that the SANPARKS CEO recently said that those opposed to these hotels are old-fashioned purists and that the time of visiting the Parks for a Nature experience has had its day.

The building of these hotels with all the advertised facilities will convert the KNP into just another holiday resort.

The advertised spa’s, gyms, smoking rooms and bars and ladies bars and swimming pools and other luxurious add ons are foreign to National Parks; not only in South Africa but all over the world. There are hotels in a few National Parks abroad, but nothing as lavish as what is planned for Malelane, they are mainly seasonal and in Parks with no such Bio-Diversity as found in KRUGER.

Persons who require luxury and pampering could make use of the 40% utilised concessions in the Park or the facilities offered close by outside the Park, or seek it elsewhere.

Water supply to the Malelane hotel will be from five boreholes fulfilling the daily requirement of 105 000 litres.

Sewerage will be handled by a Bio filtration system.

You may decide for yourself what the impact during the site preparation and the construction period.

The Malelane site is close to one of the few nesting sites of the endangered Fishing Owl. Where there previously were 14 nesting sites of these birds along the Olifants River within the borders of the Kruger National Parks, only two were found during a search the previous year.

The critical endangered Swazi Impala lilies on this site will be affected no matter how much care is taken to avoid this from happening.

The game animals that are used to the sodic pans on used will have to find another source of minerals.

The planned hotel site was after extensive research, zoned as a Wilderness Zone in 1985 by the then National Parks Board

The area is now zoned as primitive as shown on the map:

The Biodiversity Map of 2006, which has not yet been amended, indicates that the area as being of High Bio Diversity Sensitivity Value: 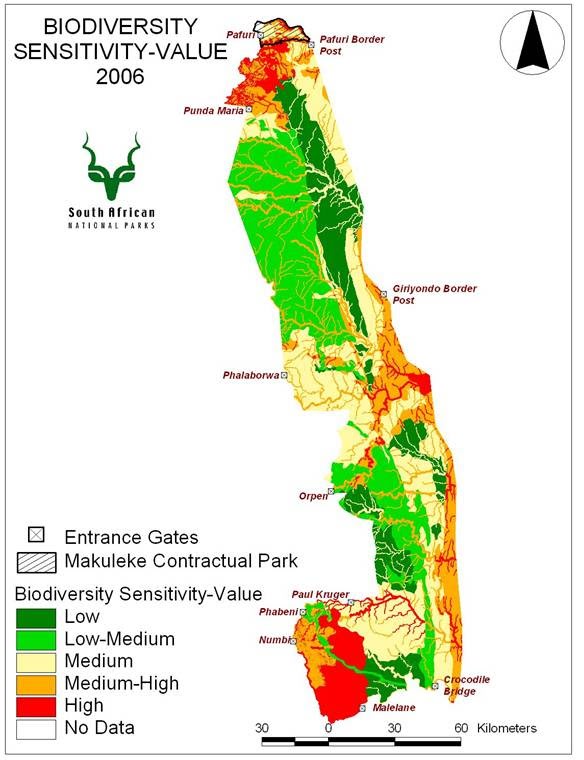 After the Malelane Sun Hotel outside the Park was destroyed by fire, SANPARKS now have seen an opportunity to build a hotel that was identified as a Wilderness Area in 1985.

Should there really be a demand for a hotel; an easy solution would be to build it outside the KNP. A site is available on the Mjejane Trust Land which was a successful land claim and adjoining the Park south of the Crocodile River.

The socio economic impact to the current concession holders in the KNP will most definitely not be of a positive nature.

With 24/7, access visitors will leave their vehicles at the Malelane Gate and then shuttled to the planned hotel in either buses or open safari vehicles. This will cause an unfamiliar situation for the Night jars, Owls, Dikkops, Plovers and other birds as well as the reptiles and mammals that frequent the roads an surrounding bush, with all the lights and dust and human noise more than ever before, road kills will be increased.

Here below is a very sad photograph taken by me on 13 April 2010, along the Skukuza-Tshokwane road (H1-2) south of the Shiloleni Creek. Readers will notice that the Steenbok doe is drowning in her own body floods. You will also notice the udder which indicates that she is either pregnant or that there is a little fawn that will soon succumb in the bush from either thirst or starvation. 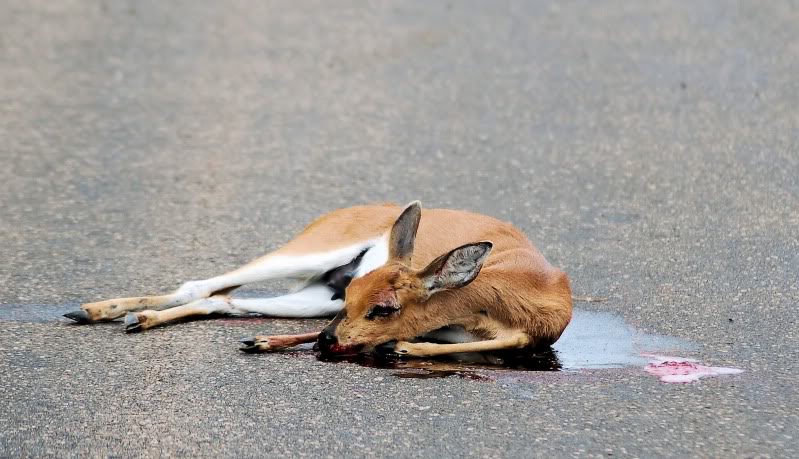 Readers can make their own calculations what the increased utilization would be on the already overutelized southern part of the KNP.

The CEO of SANPARKS is of opinion that this venture would have little or no impact on the area. You may decide for yourself whether you agree.

Visitors to the KNP go there for a spirit enriching experience; these hotels will change all of this.

Biodiversity is not restricted to fauna and flora; it goes much further – it is about the whole ecology, and includes the history with the archaeology and geology and the whole sense of wilderness, all of this will change, not for the better.

Col Stevenson-Hamilton, after 44 years of service as the first Warden of the KNP pleaded in 1946 at his retirement from his Eden pleaded to please “Keep it Simple – Keep it Wild”.

I today do the same. Please do not build hotels in our Park and change it into just another holiday resort.

The Carte Blanche national television insert tonight was rather insightful, and represents a large amount of work done by a number of conservation-centred people around this country, over the last two and a half years!

But there remains a lot more to be discussed, including the second hotel in Skukuza, as well as further developments along the same lines throughout Kruger and other National Parks!
Top

Perhaps a poignant reminder of the threats facing Kruger is this simple recent picture of the Southern Region, which can be clearly seen without the need of any borders to be inserted...