Like phantoms in the wind a herd of zebra weaved their way through the golden grass. Some youngsters kicking up dust as the older zebra watched with disdain. Not far behind them under the shade of a bush lay three lionesses with two dabbled cubs. As the cubs clambered over the adults back and played with the swishing tails the zebra meandered off knowing they were not under attack. We left the wooded area and in the distance a lake of pink framed the base of the crater wall. Wall to wall flamingo skimmed the salty waters as they waded through the murky water. Both greater and lesser flamingo formed patterns as they meandered along in their endless quest for nourishment - which reminded us it was time for us human creatures to stop for lunch. As was the norm we feasted on toasted cheese sandwiches and ice cold drinks as we relaxed under a tree watching the world go by.
After a short lunch break we were soon wandering across the crater floor looking for more creatures that lived in this world. Jackal and foxes skitted across the short grass allowing us a brief glimpse of them. A rhino wandered down one of the many tracks. This rhino had the most spectacular horns I have ever seen- both horns where equal length and massive. The abundance of wild life, not just the cats but the smaller creatures kept is enthralled until the evening chorus of birds signaled it was time for us to leave the crater and head for camp.
The following morning we headed for the Serengeti. We stopped for lunch at a small town called Mosquito creek 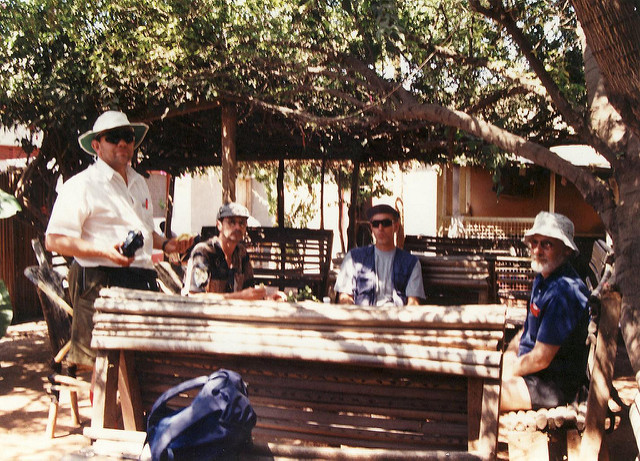 - I did not see a single mosquito nor any sign of a creek - perhaps in the rainy season things are different. As usual the people were incredibly friendly and couldn't do enough to give us good service. It didn't take long and the gates to the Serengeti were in front of us. Rafael had made the journey into an incredible experience - telling us the history of the areas we had passed through as well as pointing out birds he spotted on the side of the road.
When we stopped at the gate - 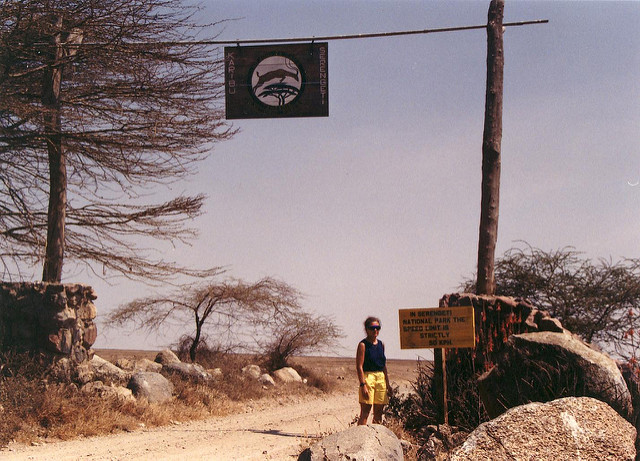 Rafael asked if there was anything special we would like to see. Leopard - was the majority call. We set off down one of the tracks and very close to the gate Rafael pointed to a tree in the distance. He said there was a resident leopard and if we were lucky he would be at home. Not only was he at home he had also stocked his pantry. Spread across the branch of a tree, he was doing what leopard do best - sleeping. We stopped and watched for a short time before he raised his head, yawned and, the only way to describe it, lumbered down the tree. He had a huge belly and self satisfied look of hunger vanquished. He disappeared behind the tree and we headed for our first camp.
This was the one and only time I saw Amos lose his temper. 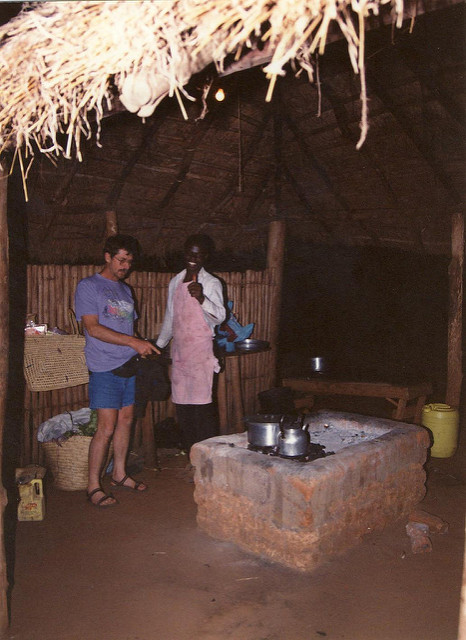 The tranquility of the Africa sunset was broken by loud shouting and yelling. We soon realized Amos was going at it hammer and tongs in a mixture of Swahili and English. I was a tad concerned as this was not the "don't worry be happy" Amos we had got to know - especially as he seemed to fighting with himself! I strolled over to see if I could perhaps be of any help. It took every ounce of will I possessed not to start laughing. For me it was a small matter but obviously for Amos it was an absolute outrage that someone had raided "his kitchen" and his bucket had been seconded without his permission. He was like a rabid dog over his bucket. I finally convinced him it was not the end of the world and that I was positive he would find his bucket before long. Once calm had settled over the camp (and Amos had his bucket back) we were soon treated to another one of Amos's wonderful meals.
The darkness had fallen and the camp fire stories had drawn to a close so we headed off to bed.
During the night I woke up and realized I desperately had to spend a penny! I lay in the darkness debating going out into the night with my torch for company. There were no toilet facilities and I knew I had to walk and find a convenient "non existent" tree or bush to hide behind. Finally desperation drove me out of my warm tent and out into the unknown. I had not got far from our tent when I heard lion and Hyena calling. I knew they could see me long before I would see them. Convincing myself they were at least 5 kilometers away I did what had to be done - then the hard part - turning my back to the darkness to head back to safety. I notulantly sauntered back to my tent and as soon as I could all bravado fled and I managed a beautiful imitation of a dive onto my stretcher. Breathing hard - I could now enjoy the sound of the night predators in the comparative safety of my tent.
Next morning, bright and early, we sat down for our breakfast when I asked Rafael if he had heard the lion and Hyena. He said he had but thought they had been between three and five kilometers away. I grinned and asked him to take a walk with me.
Outside my tent I pointed out some very distinct hyena track. I know they had not been there before I took my moonlight stroll as I had checked very carefully before going out. I have know idea if it had been minutes or hours after me returning to dreamland that our nocturnal visitor had coming knocking! Rafael and I had both been wrong in judging distance that night.
We were soon waving a cheery goodbye to Amos as we set out to find the gnu. First a detour to look for a leopard. Our first sign of what we were about to experience was the dust followed very shortly by the noise and the smell of thousand upon thousand gnu moving as one across the plains. Camera forgotten in my lap - I sat spellbound trying to absorb the magnitude of what was happening in front of me.


A small group at the front of the main herd 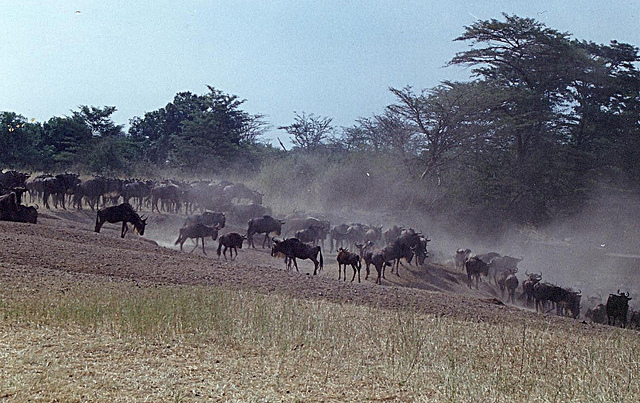 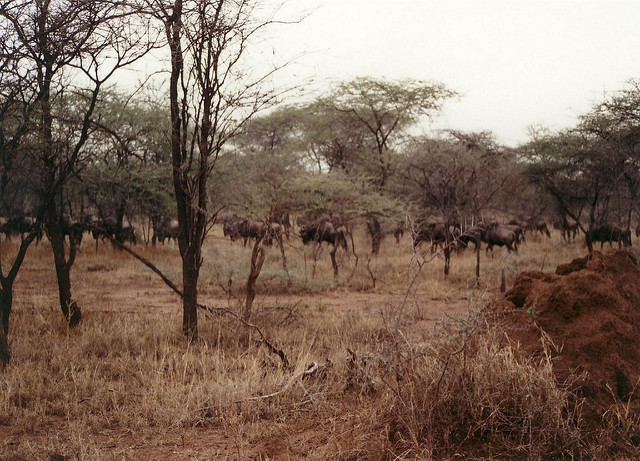 No TV program or photo's can ever do justice to an event of this magnitude.

With so much food on the hoof the predators are never far behind them. And lets be honest these wildebeest are not the brightest of animals and are way too curious for there own good. Admittedly I have seen big daddy of a small herd take on a lioness and her sub adult cub! 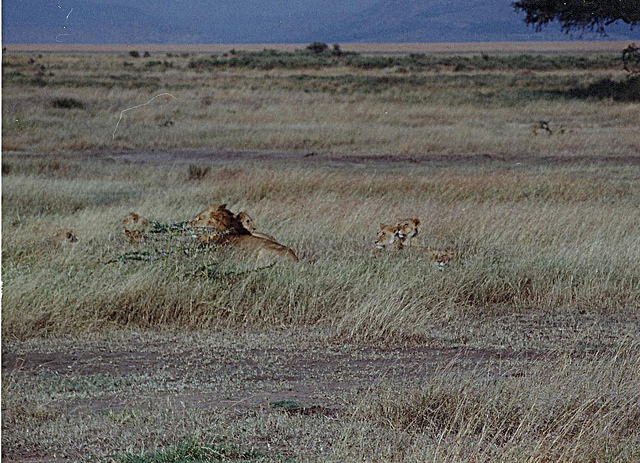 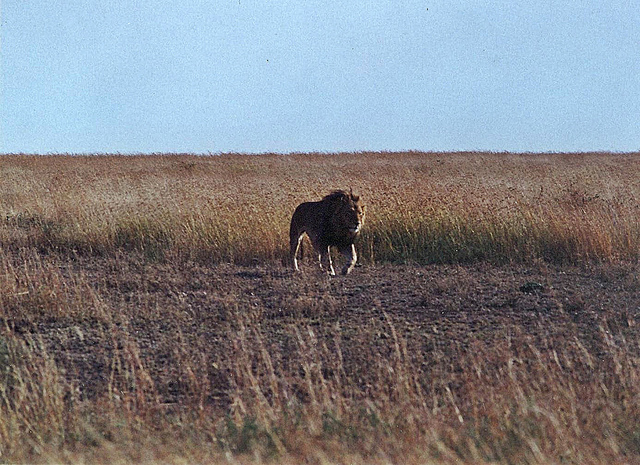 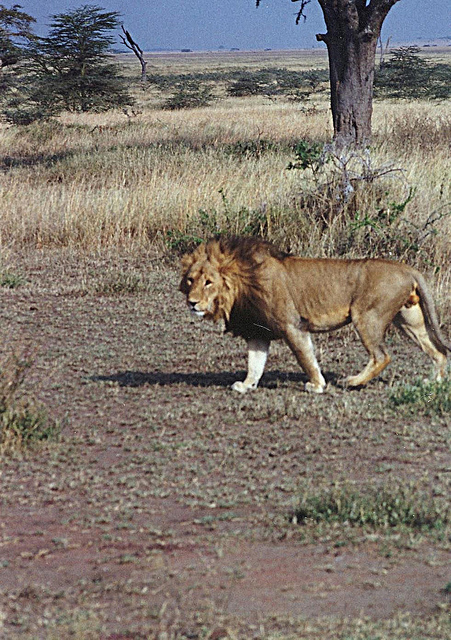 This beautiful young lady decided our vehicle was a good place to camouflage herself. She plonked herself down next us and was so close we could have plucked her eyebrows for her! 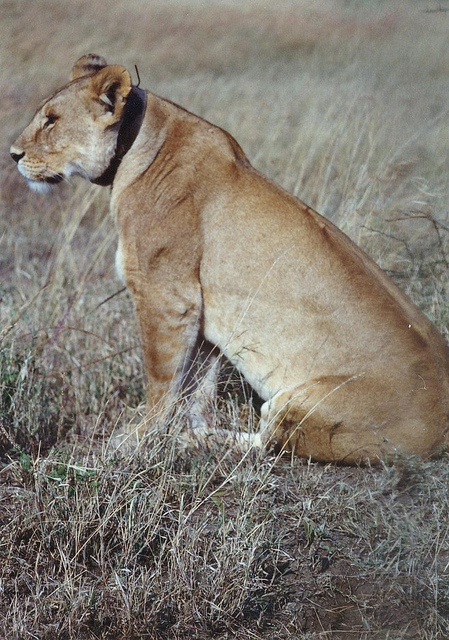 Time to have lunch - and as usual we had wonderfully prepared toasted sandwiches that we all enjoyed no end.What was even better was the ice cold drinks that cleared our throats of dust like a river through a desert.
Time to move on and see more wonders of the beautiful Serengeti.
Top

The following day followed much the same pattern as the day before. Dust and Gnu where ever one looked. A world beyond what I had ever experienced before. Contentment and gratification of the wonders of our world filled my every being. Dirty, tired but floating on cloud nine we headed to the lodge on the off chance of them allowing us to have a hot shower. We were met by postings stating that water was at a premium and no water was available between certain hours. Rafael spoke to the lodge manager and unfortunately there was nothing he could do - no hot shower - no hot bath. Settling for a basin wash in the cloakrooms was better than nothing!
Comparatively clean we settled at the bar and fortified ourselves with a few drinks. Sadly the video one of our travelling companions had taken was a disaster - just blurred mist of nothingness when we watched it. Frustrated and disappointed that we had no recordings of our experience was soon outweighed by the thought the only thing that could take our memories away was Alzheimer's disease or death.
Time to head back to our tent.
That night the silence was broken by the most horrendous snoring. Nothing. nada. zilch could block out the sawing of umpteen logs in the night. The following morning some people from an over-lander complained they had been kept awake all night. Grim faced and serious I added my tuppence worth - there was no way in hell I was going to admit the snoring had been generated from my tent. Hubby at his best - and not even putting a pillow over his heading and holding it tight stopped the horrendous sound!
Days and night had blended into a continuous stream of utter contentment but all too soon we had to think about returning to the day to day living back home.
One last short trek into the corridors - a final goodbye to the predators and their prey and we had to head back to Arusha for our final night in this amazing country.
Early the following morning - packed but not really ready to go home - tensions were running high. Our taxi had not arrived - and we had a plane to catch. Perfectly content - I told our fellow companions to chill as we were on African time. Finally Rafael arrived and told us he would take us to the airport as he had heard via bush telegraph our transport seemed to have gotten lost in the sands of time.
Bouncing through the potholes we finally arrived at the airport - only to have to twiddle our thumbs for a further two hours as the flight had had technical problems and had been delayed by two hour. Africa - a world within a world!
Many people have asked - "would you do it again?" my answer - "in a heartbeat"
Top
13 posts