Location: Situated about 30 km south east of Alberton in Gauteng.
Getting there: Take the R59 south towards Vereeniging and exit at Klipriver. Turn left and proceed along the road until you see the signboards.

It's not a big 5 reserve. Animals are mainly antelope and the birdlife is excellent. It is very popular with hikers and cyclists. The road is a one-way loop with some spectacular scenery. There is a picnic site for a halfway stop.

Facilities close by are Karee Kloof which is an excelent place to camp. The Karee Kloof resort is one of the old Aventura resorts and when I last visited, was clean, quiet and good value for money.
Top

I haven't been to Suikerbosrand for close on 25 years.
When I was last there, the loop road was not open to the public. Is it now?
On the weekend, there used to be a bus that did the loop. What animals you saw depended on the driver. Sometimes he would just drive without stopping for anything. whiile other drivers would stop for birds.

Otherwise you had to do the hikes.

I also remember there being a sort of museum with stuffed animals. Is that still there?
Top

Dzombo, I haven't any knowledge of a museum.

The roads have been open all the time as far as I know with the middle section being a one-way. The route is about 58 km long and it takes a few hours to do the reserve.

I am not sure what animals they have, but I know the birding is very good. Animals I have seen, Eland, Kudu (almost got hit by one on one of my cycle circuits), zebra, wildebeest, Tsessebe and maybe a few others. I know they have baboons but I have seldom seen them in the reserve. IIRC they may have red hartebees as well.
Top

BH
The museum was more of a room with some stuffed animals.

I don't remember seeing much game. Eland and Kudu come to mind.
The birding was very good though.
Top

They even have a hotel there owned and run by Protea Hotels. I have never even so much as seen it and when I look at the scarcity of cars in the reserve, I have to wonder how they stay afloat. Most of the traffic there is due to cycling and hiking and the car park is usually full on a weekend.

Being a local, it's a shortish distance to drive for a day visit. And if I need to stay over, I'm quite happy to camp at Karee Kloof.

SBR used to have a successful cheetah breeding project on the go. The lack of competition for food had the cheetahs flourishing. I have no idea why they pulled the plug on it.
Top

Sadly though Protea Hotels have sold/closed down their hotel and holiday resort at Suikerbosrand.

There is still a great variety of bird life to be seen - and the landscapes are beautiful.

Here the Aloes are still in bloom late August. 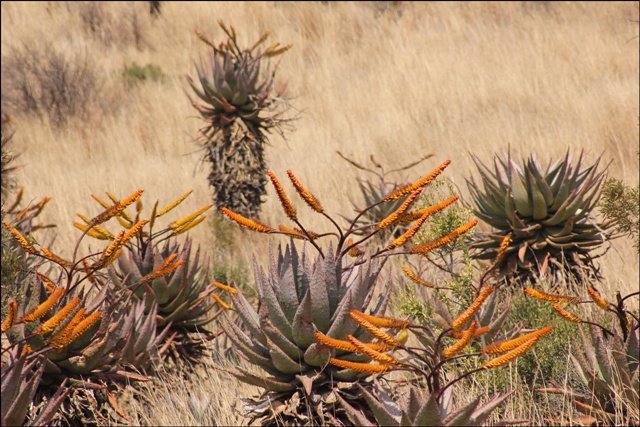 Any sunbirds around?
Top

I had a good look - only a yellow birdie looking like a weaver/canary - it was quite a distance.
I have to work that one out because I didn't know they go for sweet nectar

Three provincial administrations, millions of rands and 11 years - and the water supply project that was to breathe life into the Suikerbosrand Nature Reserve, near Heidelberg, is yet to be completed.

The project has been so badly managed that the Gauteng Department of Infrastructure is unable to say how much has been spent on it.

The reserve, which boasts a number of bird and animal species and which draws hikers to its scenic trails, was closed to the public on January 26 after management said it could not guarantee the safety and health of visitors.

The Suikerbosrand Northern Waterline project includes an 80kl underground reservoir to be supplied by 14.46km of pipingto connect it to a Rand Water line.

A generator and pump station are to be installed to supply the reserve with water.

The project was conceived after it became clear that the southern water line had reached the end of its lifespan and was creating problems.

The water is needed for the Kareekloof area, a section of the reserve designated for recreationand braai facilities.

But two contractors later, the department is still battling to complete the work. One of the contractors appeared before the provincial portfolio committee on infrastructure last week and claimed he was owed more than R5-million for work done on the unfinished project.

During the portfolio committee, officials of Gauteng department of infrastructure development took turns trying to explain to chairperson Landiwe Lasindwa how the project would be rescued from collapse. The project was started years ago when Mbhazima Shilowa was provincial premier and has continued through three administrations. The department toldLasindwa that the contract with the contractor, Lumacon, was worth R5-million and expenditure to date was R2.3-million, but these figures could not be substantiated.

A departmental report before the committee said delays were the result of an unhealthy relationship "between the contractor, Lumacon, and the engineer, Mosa Group, since the project began".

"[The department] has tried to intervene in June 2014 as this was affecting the progress of the project," the report said.

Relations were so bad that the contractor was not taking the engineering company's instruction and "work could not progress as planned", it said.

But Mosa Group claimed Lumacon's on-site staff did not have capacity to carry out instructions. It claimed it had issued numerous warning letters.

Lumacon representative Lindokuhle Sithole, who was present at the committee meeting, defended his company's position.

"We have on numerous occasions refused to take instructions because they were out of the scope of the project.

"We are not allowed to execute verbal instructions that are not on the design and scope of the project. These instructions were pushing the cost beyond the allocated funds," said Sithole.

Bethuel Netshiswinzhe, head of department, said 90% of the work had been completed and the project would be finished by next month. But this was challenged by the committee after Sithole said much still needed to be done.

The project was investigated by Public Protector Thuli Madonsela, who found that the department mismanaged public funds.

Lambasting the department, Lasindwa said: "The project was supposed to be completed in 2009. What happened all these years? Where is the department's project manager? How much have we really spent on this project? This is public money. You cannot spend it as if it is your own ..."

The reserve's only source of water is borehole water but it is difficult to distribute it to all the points of the property.

"For the past two years, officials working on the project have told us they are 90% complete and we are still waiting," said Eleanor McGregor, director responsible for nature reserves at the department of economic development, agriculture and rural development for the Gauteng government.
Top

It is sad news that Suikerbosrand has eventually closed it's gates.

Over the last 2 years my visits became less and less untill lately I was only travelling on the main road outside the park, as there were more birds (and buck) than in the park.

To be honest, I was expecting this....