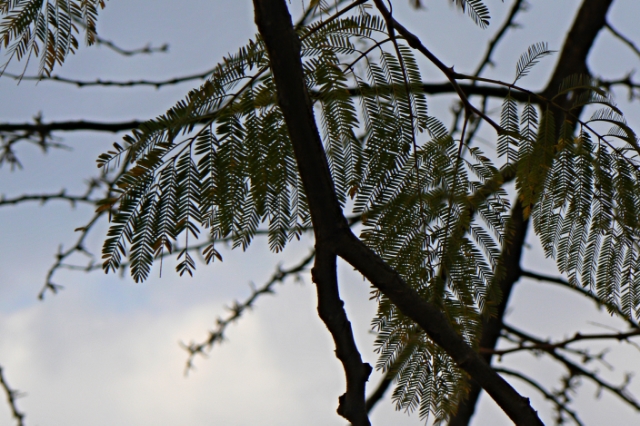 Description
Small to medium-sized, often multi-stemmed tree. Stem pale, fissured with a distinctly flaking bark, even on the smaller branches. Bark yeloowish, peeling. young branches usually hairy. Thorns hooked, dark tipped, c. 6 cm, in pairs at the nodes. Leaves about as wide as long; leaﬂets bluish, usually hairy below, widely spaced. giving the tree an open airy appearance. Leaves not large, up to 6 × 4 cm, with 4-7 pairs of pinnae; leaflets in 10-25 pairs per pinna, often slightly curved downwards; petiole fairly long, c. 1.3 cm to the first pinnae, with a raised gland near the base. Flowers (August to October) in axillary spikes, creamy white (sometimes pink), before or with the new leaves. Pods (September to January) straight, more or less oblong with conspicuous venation, leathery, pointed at the apex, dehiscent. 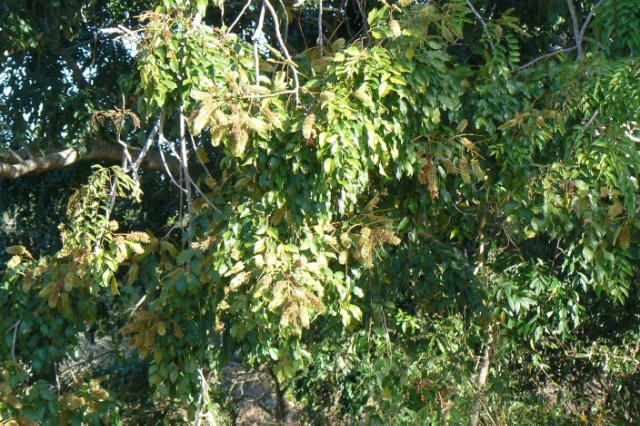 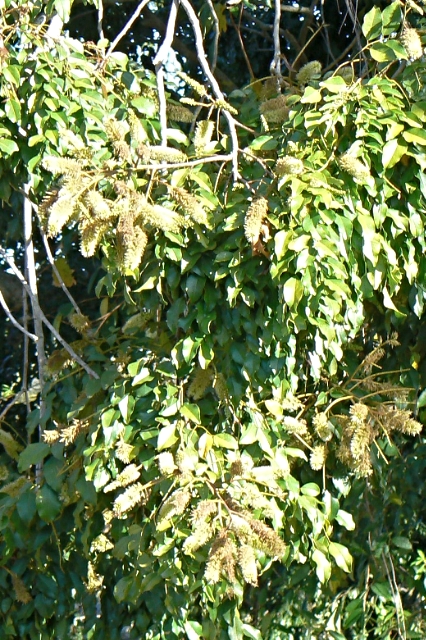 Description
A medium-sized thornless tree with compound leaves and greenish-yellow flowers, up to 14 metres in height, with a more or less rounded crown. Leaves twice pinnate; pinnae few; leaflets 2.7-3.5 cm long X 2-3 cm wide, shortly-stalked, more or less blunt or rounded at both ends, thin in texture, finely veined. Calyx tubular, lobes five, short. Petals five, attached to calyx tube, narrowed at base. Stamens ten, free. Fruit flat, woody, up to 14 cm long x 4 cm wide, with 4-8 seeds which are up to 1.5 cm long x 1 cm wide, compressed.
The tree, the bark and roots of which are very toxic (containing the alkaloid erythrophleine), is used extensively for traditional medicine. The bark has been used as ordeal poison and proof poison.

Distribution
False Bay to Maputaland in KwaZulu-Natal, also occurs in Swaziland and Mozambique. 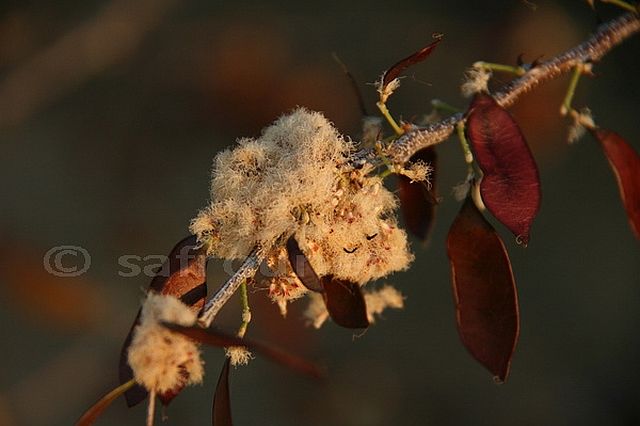 Description
A very thorny multi-stemmed small tree or shrub with a rounded or spreading flat crown that sometimes touches the ground, 3–7 m tall.
Thorns occur in pairs at nodes which are spaced at intervals of 5–15 mm, sometimes up to 30 mm. There are thus more thorns per unit length of branch than with other species. The thorns are hooked and blackish. Short, curved thorns, like cats’ claws, are found just below each leaf-bud, and spiral around the branchlets and twigs. They are yellow-green when young and dark red to grey-black when mature. This tree has more thorns per length of stem than most Acacias (Thorn: up to 5 mm).
The leaves are twice compound and have 2-3 pairs of feathers, and are unusual for an Acacia, each leaflet having only 1–2 pairs of large, opposite leaflets. Each pair looks like a butterfly (Leaflet: 4–15 x 3–10 mm). Leaves are green initially, the same shade both above and below, but become glaucous when older. Main and lateral venation is visible on both surfaces. Leaflet margins are sparsely fringed with white hairs. The combined length of petiole (leaf stalk) plus rachis (the axis of a compound leaf) is up to 40 mm long. This stalk is sparsely pubescent, though sometimes glabrous on young plants, and is slender and light green. A petiole gland is usually present; the petiole is hairy.
The bark is rough and dark brown to black on the main stem and older branches, with lengthwise fissures showing yellowish under-bark. On the young branches the bark is grey to yellowish-brown.
Flowers usually appear in August or September before the tree comes into leaf. The conspicuous flowers look like balls but are actually very short flower-spikes. They are closely packed along the rigid, dark brown branchlets (10 mm diam.) The flowers are cream to white, but they take on a brownish hue when fading. They are sweetly scented.
The pods develop rapidly after flowering has taken place. They are small, straw-coloured or pale brown, thin to almost papery, straight, smooth, dehiscent (opening spontaneously when ripe) and 25–80 x 13–25 mm (January–April).

Distribution
From the Northern Cape in the south, to the Free State, Gauteng, North-West Province, Mpumalanga, the Limpopo Province, and northwards to Tanzania. In the Northern Cape Province it occurs mainly in the northwestern portion, notably in the Vryburg, Taung, Barkly West and Keimoes areas. In the Free State it grows in the western portion: Jacobsdal and Fauresmith areas. In Gauteng, Limpopo, Mpumalanga and North West Provinces: it is found over most of the bushveld areas, down to the Springbok Flats north of Pretoria.
In Namibia it is found in the Caprivi Strip, Kaokoveld, Otjiwarongo, Outjo, Okahandja and Gobabis Districts and further south. In Botswana it occurs in the eastern and southern regions. 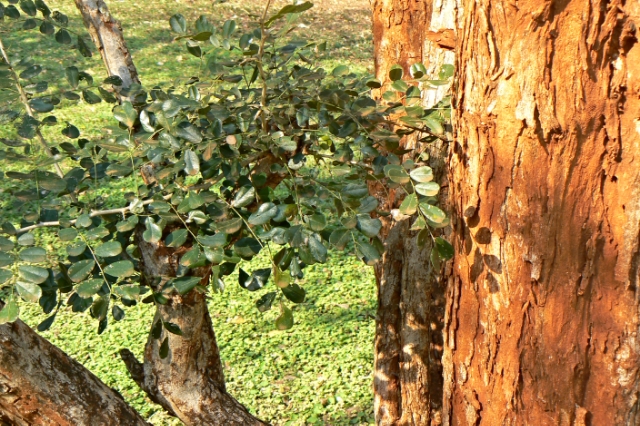 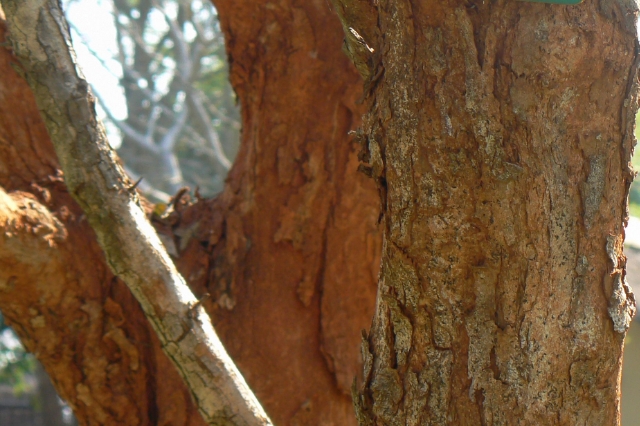 Conservation Status
Classified as Near Threatened on the IUCN Red List.
Its timber is widely used in the wood carving industry and in musical instrument manufacture. Levels of exploitation are very high and larger or suitably exploitable individuals are becoming increasingly scarce. There is cause for concern over genetic erosion in many populations. 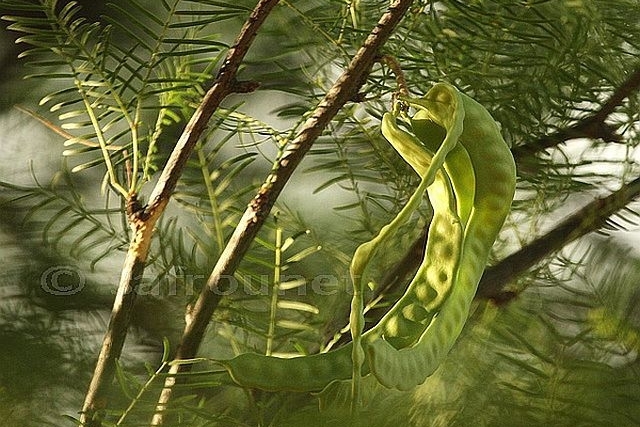 Description
A multistemmed acacia-like shrub, or small to large tree, 3–10 m tall. Branches with reddish-brown branchlets, armed with paired straight spines. Dark green leaves with leaflets 10-25 mm long. Leaves twice compound with one pair of pinnae, hairless leaflets widely spaced with 7-18 pairs per pinna. Flowers are cream to yellow and borne in axillary spikes. The straight pods are woody, slender, cylindrical and slightly constricted between the seeds. Flowering time is in summer, from June to November.

Distribution
Originally imported from America for its potential to provide fodder (pods), shade and firewood in arid areas. It is a declared invader in South Africa. Category 2 NEMBA; 1b in Eastern Cape, Free State, North-West and Western Cape; 3 in Northern Cape.

Prosopis trees are extravagant users of readily available ground-water and dense stands could seriously affect the hydrology of the ecosystems they invade. Dense stands compete with and replace indigenous woody and grassland species.
Top 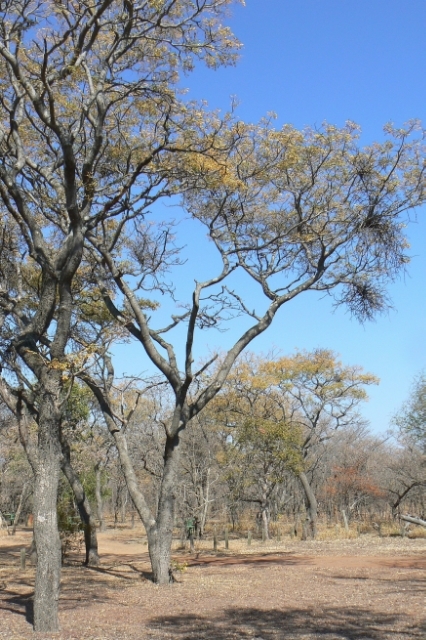 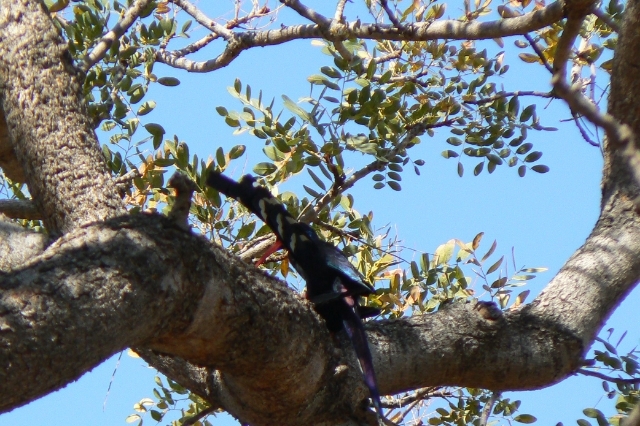 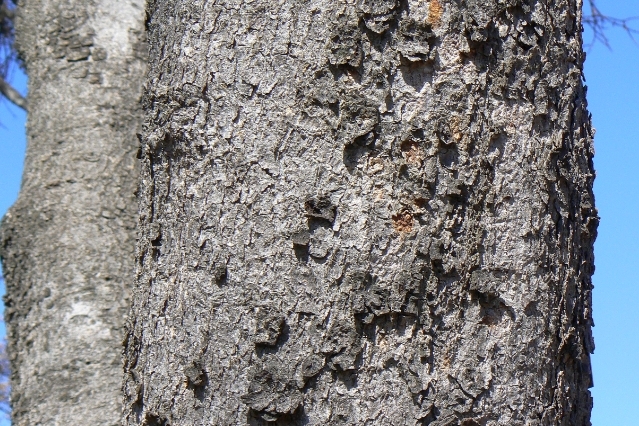 Description
Deciduous, medium-sized, spreading, flat-topped tree with an erect trunk, up to 8 m high, V-shaped. Bark rough, both vertically and horizontally fissured. Twigs with brown-hairy at the tip. Leaves are pinnately compound, silvery-pubescent or glabrescent. Each leaf is 100–350 mm long, with 2–4 pairs of pinnae and 5–18 leaflets per pinna. Leaflets are alternate and oval and silvery when they are young and marked with brown spots. Flowers are creamy white, fragrant and in pendulous racemes of up to 300 mm in length. Pods flat, elliptic, wing-like, brown and woody, single-seeded. indehiscent, 9-12 mm.

Habitat
In sandy soils in dry deciduous bushveld and woodlands. Habitat
Along rocky ridges and slopes in bushveld. 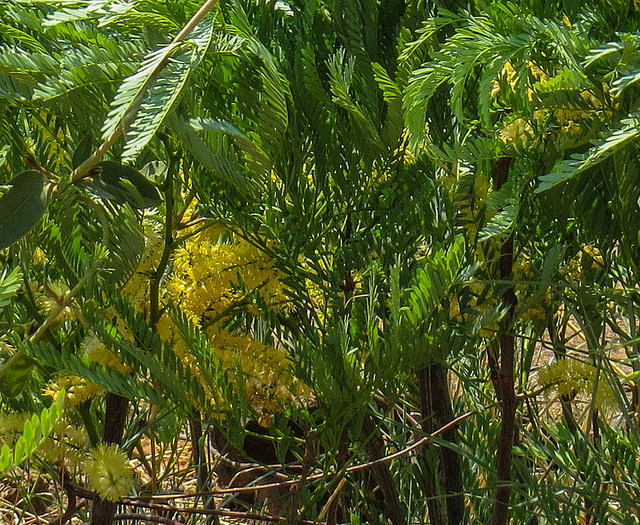