Index to Flowers in the Order Asparagales 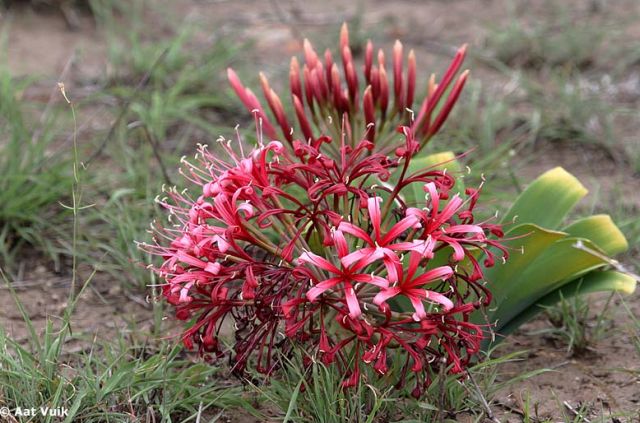 Description
A deciduous perennial with a large bulb, up to 20 cm; usually in groups. Leaves radiating on or near the ground. Leaves in a basal rosette, often with a "cut-off" look, due to grazing by wildlife or cattle. Flowers in a large terminal umbel, pink to carmine.

Distribution
It occurs throughout the Karoo and its range extends into the eastern grassland of the summer rainfall area of South Africa, it extends into Zimbabwe through to Kenya in east Africa. Provincial distribution: Eastern Cape, Free State, Gauteng, KwaZulu-Natal, Limpopo, Mpumalanga, Northern Cape, North West, Western Cape. It may be seen flowering during November to December practically anywhere in the Kruger National Park.

Habitat
It occurs in grassland. bushveld and karroid vegetation at altitudes between 700 and 1500 metres on flats or in depressions which are seasonally wet, although its habitat is characterised by lengthy dry periods and severe droughts. Often in brackish patches near pans. 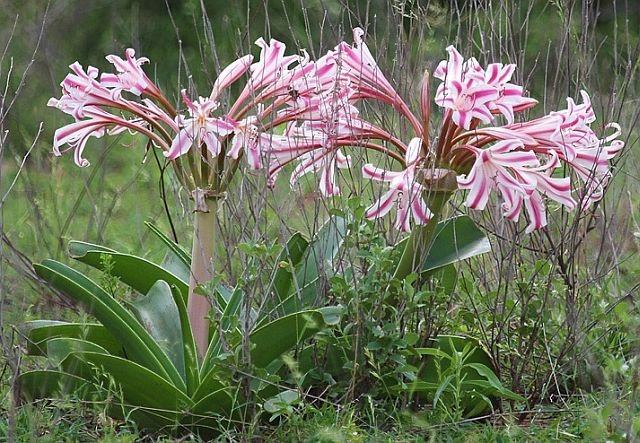 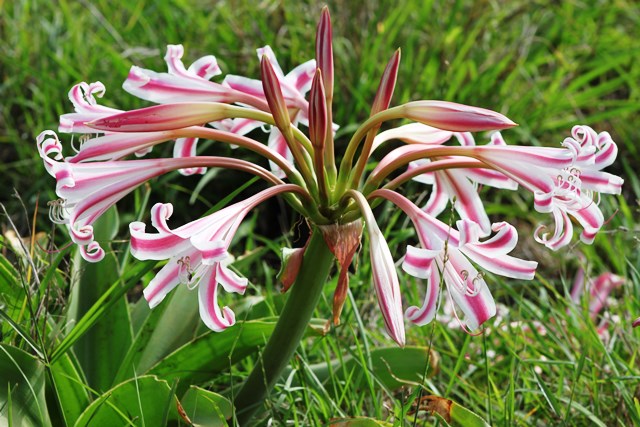 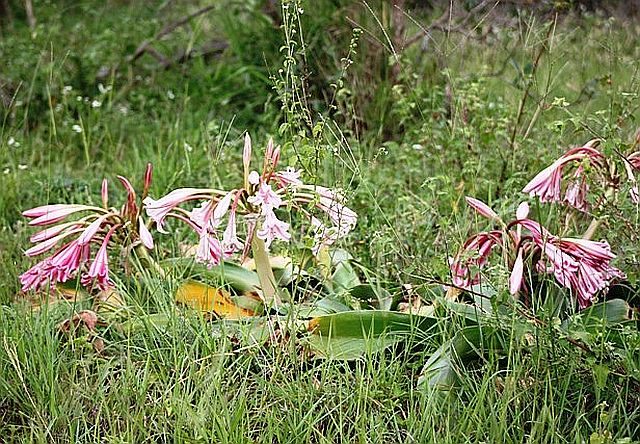 Description
Bold, candy-striped trumpets and round red fruits are characteristic of this stunning Crinum. Bulbous perennial. Leaves broad, spreading and flat, up to 100 × 20 cm; margin finely hairy. Flowers in many-flowered umbels (up to 50), flared, white with deep pink ribs. Fruit up to 7 cm in diameter, pinkish-red, not beaked.

Distribution
The species occurs from KwaZulu-Natal to East Africa along the coastal region and along the low-altitude Zambezi and Limpopo Valleys. KwaZulu-Natal, Mpumalanga, Limpopo, Swaziland and Mozambique. 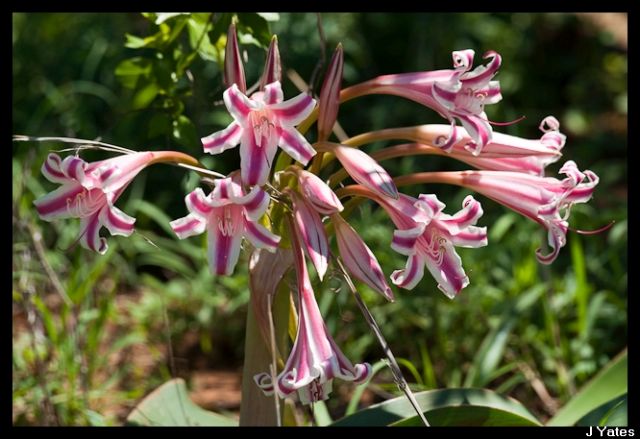 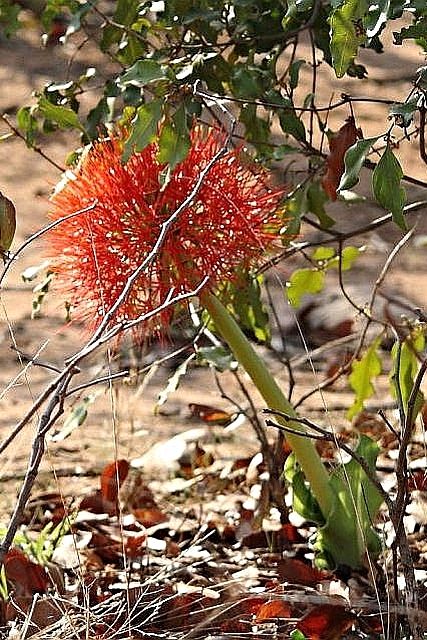 Description
Scadoxus multiflorus is a decidious plant with simple leaves. The leaves appear at the base of the plant. The flowerhead consists of up to 200 flowers, held clear of the foliage at the end of a solitary stem. Each plant will produce only one flowerhead in a season. A flowerhead can reach a diameter of 25 cm and a height of 110 cm, nearly waist height. Each flower is pinkish-orange-red with protruding stamens carrying bright yellow anthers. The flowerheads last for 1 or 2 weeks and make superb cut flowers. Flowering is in late summer to early autumn. Shiny red fruit.

Distribution
Scadoxus multiflorus has a wide distribution and varying habitat and is found predominantly in tropical Africa but its range extends from the Eastern Cape in South Africa, through KwaZulu-Natal, all four northern provinces of South Africa, into Swaziland, Mozambique, Zimbabwe, Namibia and Botswana and throughout all but the very driest regions of tropical Africa.

Habitat
It occurs in lowland to mountain forest, secondary forest, forest margins, savannah woodland, open grassland and is very common in the shade of trees at river banks. 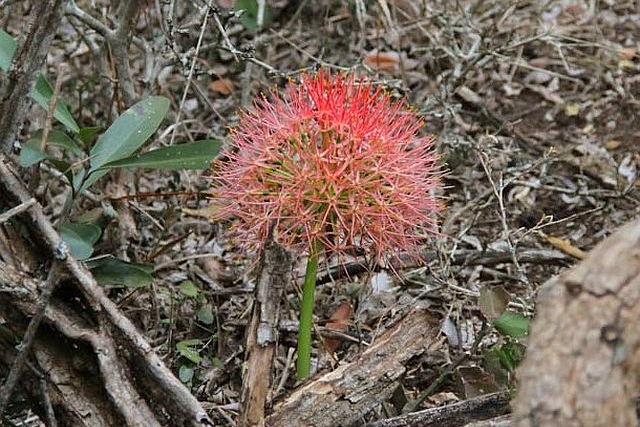 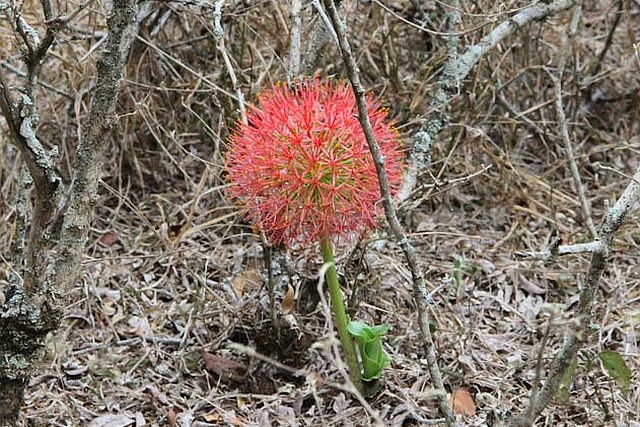 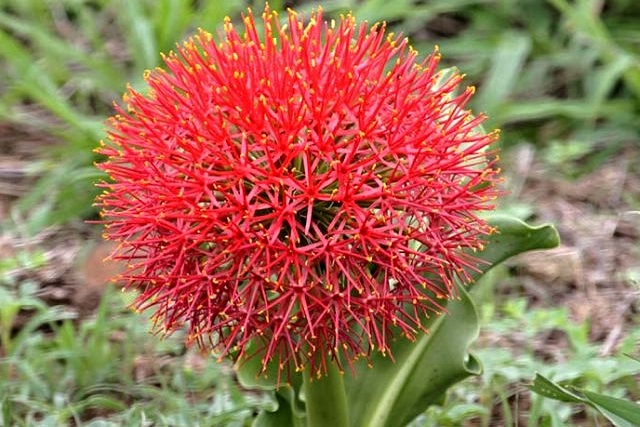 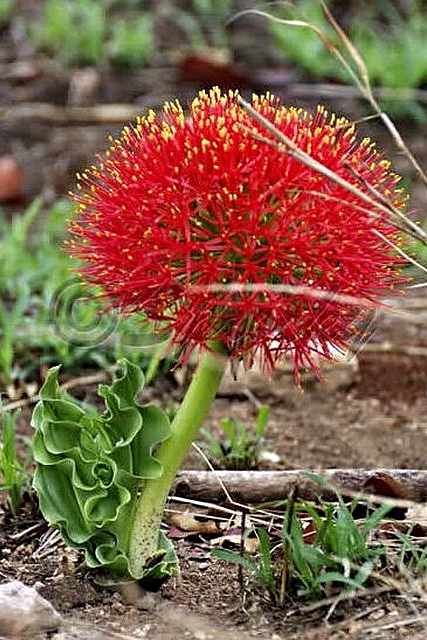 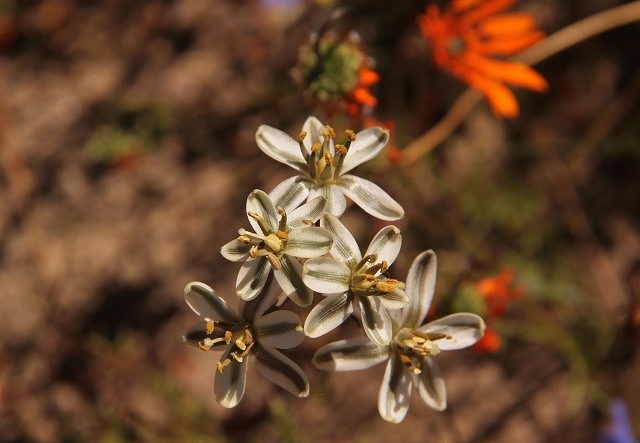 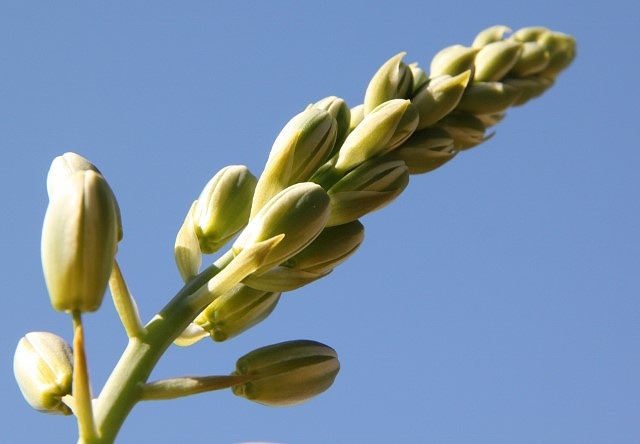 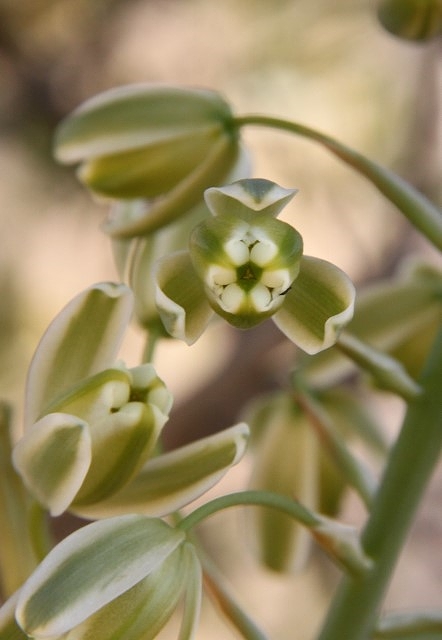 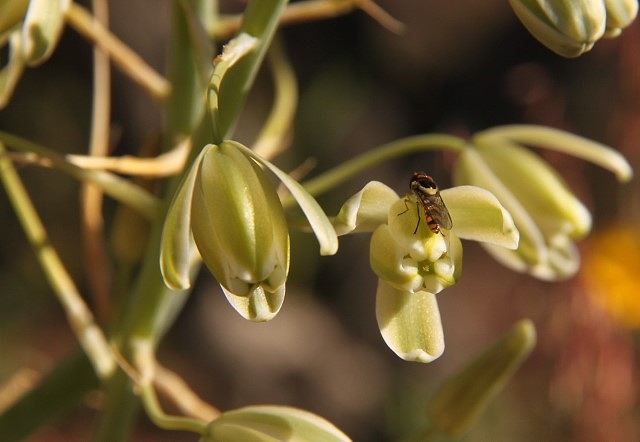 Description
Bulbous perennial, 35-60 cm, with the outer bulb tunics decaying into fibres at the top, and 2 or 3 slender, channelled leaves that clasp the stem in the lower part and are warty towards the base. Flowers are nodding, sweetly scented, yellow with green keels. Flowering is from September to January. 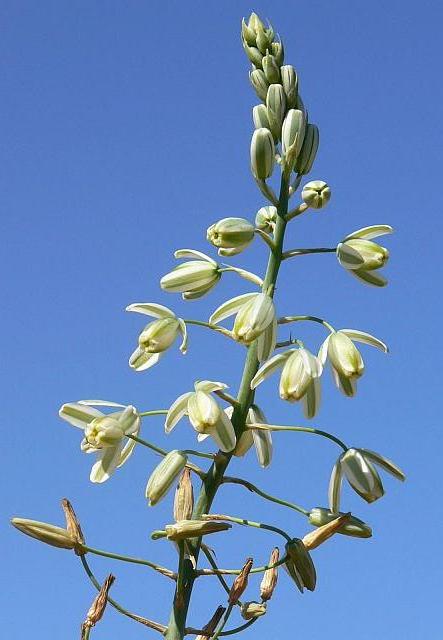 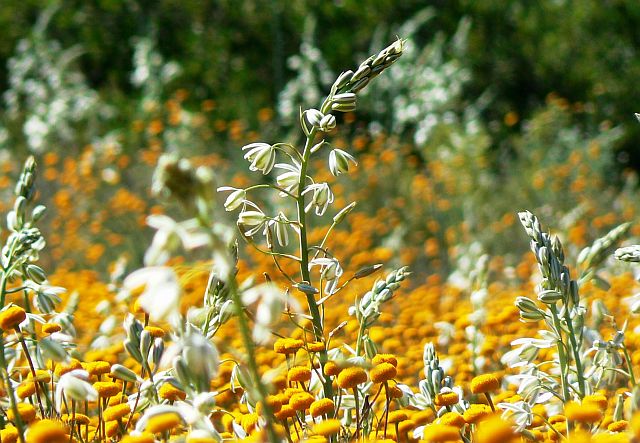 Description
Bulnous perenniel, 40-150 cm, with the outer bulb tunics slightly fribrous at the top, and 4 - 6 fleshy chenneled leaves, that clasp the stem below; bears racemes of weakly nodding, white flowers with broad green bands, 15-25 mm long, the inner petals have a hinged flap at the tip and the outer stamens are sterile. Flowering September to November. Kruger National Park, on the H4-1

Description
A bulbous plant, up to 500 mm high, with an elongated or egg-shaped bulb covered with a firm, dark outer tunic forming a short neck. Leaves about 7, linear slender and blue-green to dark green. Leaves are speckled dark below. Inflorescence round or pyramidal. Flowers up to 15 mm diameter.

Habitat
These plants form spectacular colonies in open, dry grassland. Common in sandy soil in dune streets and river terraces in the Kalahari. Mass flowering occurs after the first rains in spring or early summer.
Top Description
Acaulescent perennials forming large colonies; up to 60 cm tall. Rhizome subterranean. Leaves are dark green with paler irregular horizontal markings, flat to somewhat incurved, margin white or red. It is particularly pretty when in flower, the tall inflorescence is 65–70 cm long and carries greenish white to pale mauve, lightly scented blooms. The berries which follow the flowers are orange or yellow.
Sanseviera aethiopica and S. hyacinthoides can not readily be distinguished in the veld.

Habitat
The habitat is in summer rainfall area sandy soil, often among granite hills and outcrops. 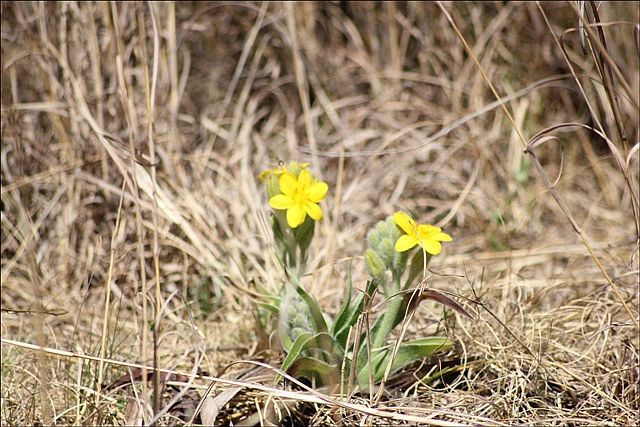 Flowers of the genus Hypoxis are herbaceous geophyte with a fibrous base and with a corm. Leaves basal, sessile, with a sheathing base; outermost reduced to cataphylls. Indumentum of 2-armed or stellate hairs. Inflorescence a raceme or corymb or flowers solitary. Flowers without a perianth tube. Tepals in two series of 3; yellow inside, hairy on the outer side. Fruit a capsule. Seeds not strophiolate, smooth or (often) papillose.
All species are deceptively similar while within each species shape and size of plants, leaves and flowers can be quite variable. This makes the species notoriously difficult to identify.

Description
Hypoxis hemerocallidea is a tuberous perennial with straplike leaves and yellow star-shaped flowers. The leaves are up to 400 mm long, neatly arranged one above the other in 3 ranks, broad, stiff and arching outwards with prominent ribs and tapering towards the tips. The lower surface of the leaves is densely hairy with white hairs. Leaves appear above ground in spring before the flowers. The flowers are carried on 5 or 6 slender erect inflorescences, each carrying 5–13 bright yellow, star-shaped flowers with 6 tepals. Six free stamens arise from the base of the tepals with prominent anthers. The style is short and fat, carrying the robust stigma. The flowers are short-lived and close at midday. Flowers open sequentially from the base to the apex. Usually 1–3 flowers are open at the same time, thus encouraging cross-pollination. The large dark brown tuber is covered with bristly hairs, and is bright yellow when freshly cut. It has an unpleasant bitter taste.
Seeds are hard, black, smooth and glossy.