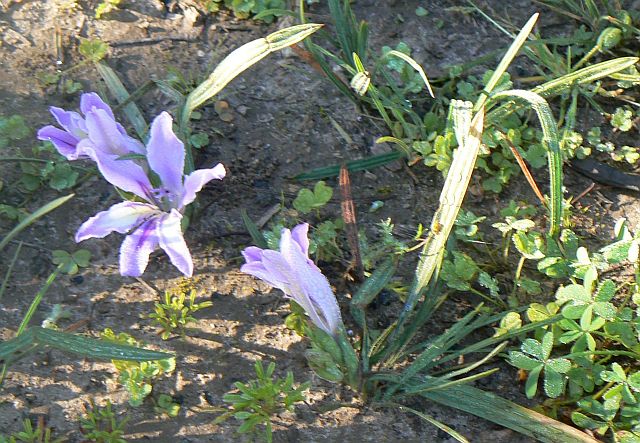 Description
Babiana ambigua is winter growing, flowers in August and September. Plants 5-8 cm high. It is a cormous perennial with hairy leaves and flower stems. The corms have densely netted tunics and part of the stem is underground. The corms are eaten by baboons. Leaves linear-lanceolate, pleated and hairy. Flowers blue to mauve with white to cream markingsvon two of the petals. Fragrant. Bracts, usually entirely green, inner bracts divided to the base.

Distribution
It is endemic to South Africa in Northern Cape, Western Cape, mainly the south-western Cape. Gifberg southwards to the Cape Peninsula, and eastwards along the coast to Riversdale. 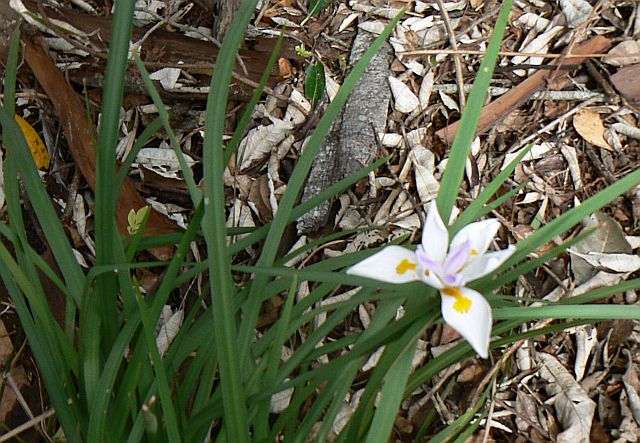 Description
It is a perennial, evergreen plant which grows up to 1.5m in large clumps. Dietes grandiflora plants grow from underground rhizomes. The long, rigid, sword-shaped green leaves are held in a fan shape. The leaves are dark green and may reach up to 1m long and 15-20mm wide.
The flowers are borne in mass at certain periods - often after rain in summer. The attractive flowers are large (about 100mm across) and are white with yellow nectar guides and outer tepals and violet central segments. The flowers are held on erect, slender stems which are about 1m in length.
The fruit is a large capsule up to 45 mm which is held erect and splits open to release shiny, dark brown seeds.

Habitat
It may be found in full sun or partial shade at forest margins, or in the shelter of taller shrubs on exposed slopes facing the sea. 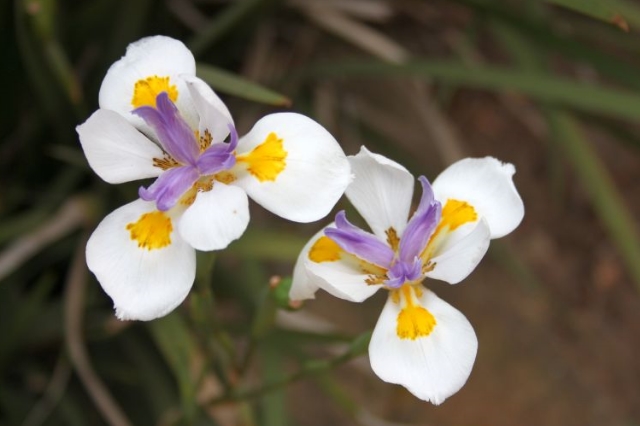 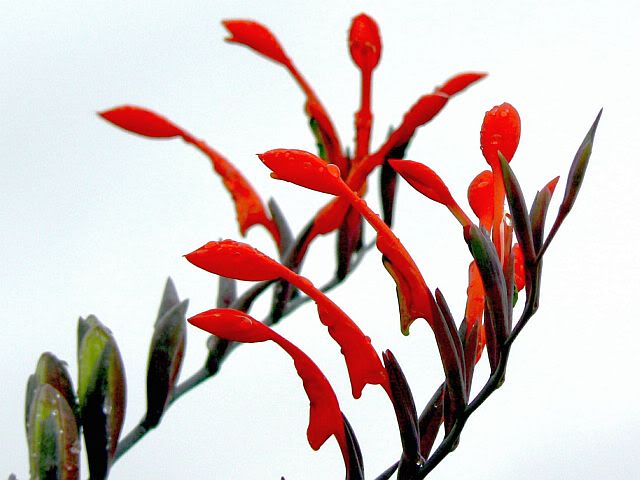 Distribution
It occurs from the western Cape of South Africa into Namibia.

Habitat
It is found in both summer and winter rainfall areas. Coastal planes.
Top

Distribution
South African endemic. It is found in the Northern Cape and Western Cape with a range from Eastern Namaqualand and Western Karoo to Pakhuis Pass. 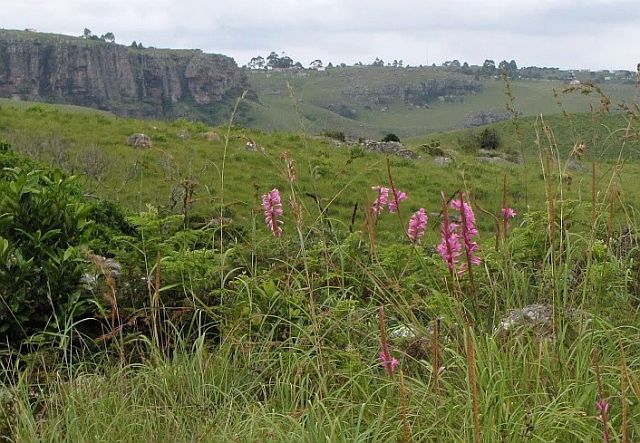 Description
Perennial herb. It is large, up to 1.5 m, with pale blue-green leaves and spikes of 15-30 flowers on an unbranched stem.

Distribution
South African endemic, from the Eastern Cape Province to KwaZulu-Natal. Watsonia confusa occurs along the coast and near interior of eastern southern Africa from Engcobo and Umtata in Transkei to Durban in Natal.

Habitat
It grows in damp sites or grassland. It extends locally inland but seldom at altitudes above 1 000 m.
Top 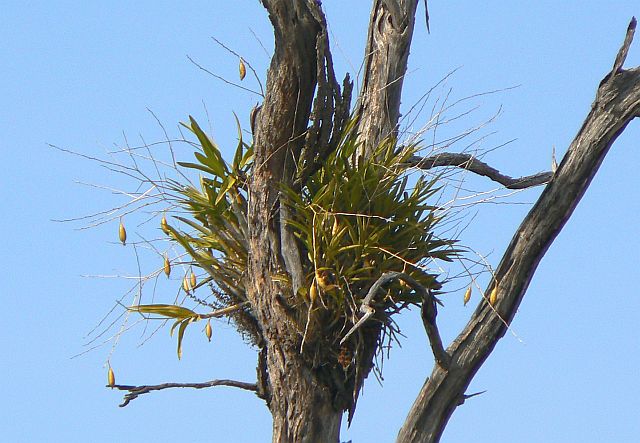 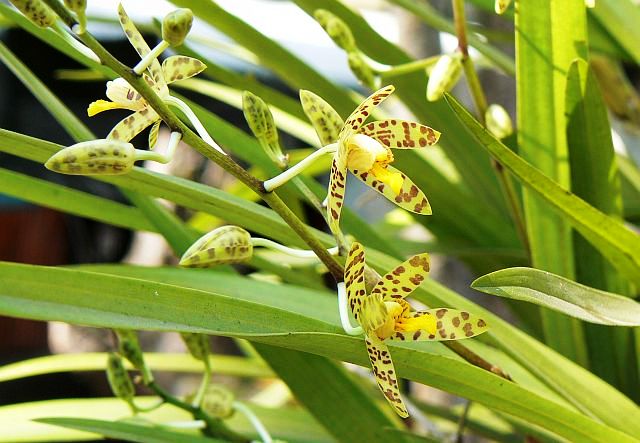 Description
This orchid is an epiphyte, which means that the whole plant, roots and all, grow above ground, attached to the branches of trees. The roots, which anchor the plant to the tree, are specially adapted to absorb water and nutrients very quickly. An unusual feature are the needle-like roots pointing upwards which form in a dense mass around the pseudobulbs and catch the rotting leaves and detritus upon which the plant feeds.
The plant flowers during the dry winter months in a mass of yellow or greenish yellow blooms, which can be lightly or heavily marked with brown spots. In the wild, plants live for a long time and can become very large, some estimated to weigh over a tonne.
There are several flower colour variations of this plant, some with many or few, large or small, maroon or brown markings and yet others yellow and unspotted. The spotted forms have earned the plant the name of leopard orchid.

Distribution
It is found in tropical Africa and into N Namibia, N Botswana, Swaziland, and in South Africa in the Northern Province, the Lowveld and Kwa-Zulu Natal, mainly in the hot, dry river valleys.

Habitat
Found alongside coasts and rivers in the canopy of trees, usually at elevations lower than 700 m (occasionally up to 2,200 m). 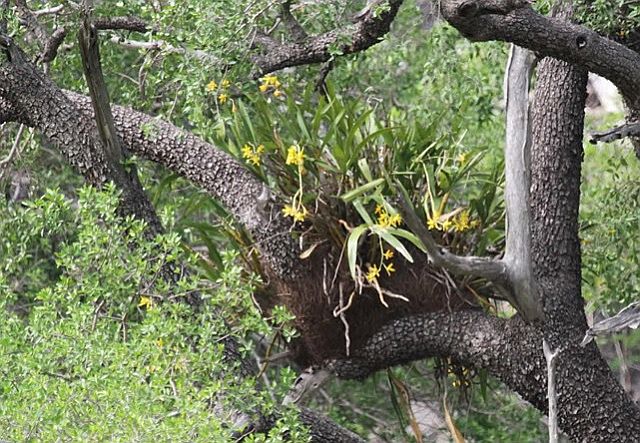 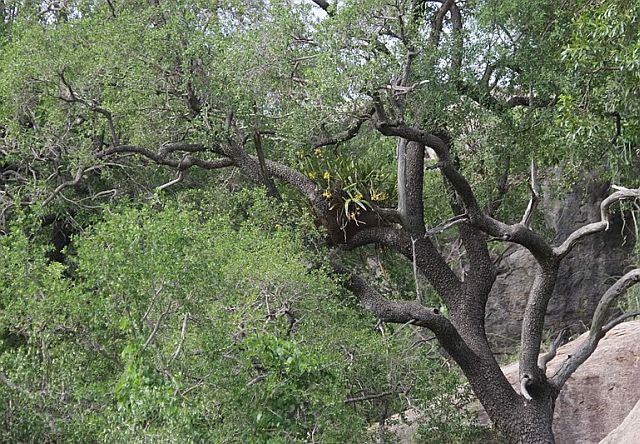 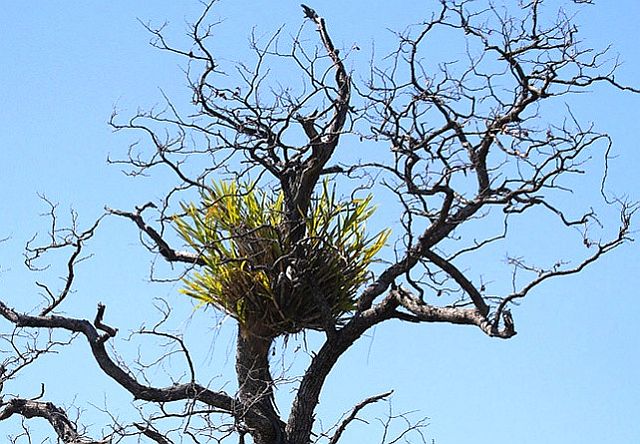 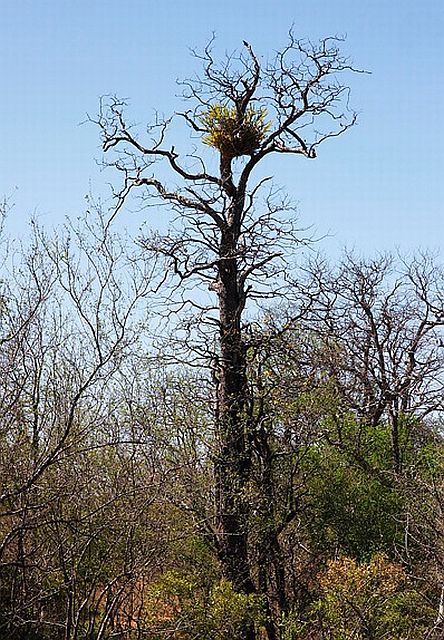 A bit of scale on the lower leaves. 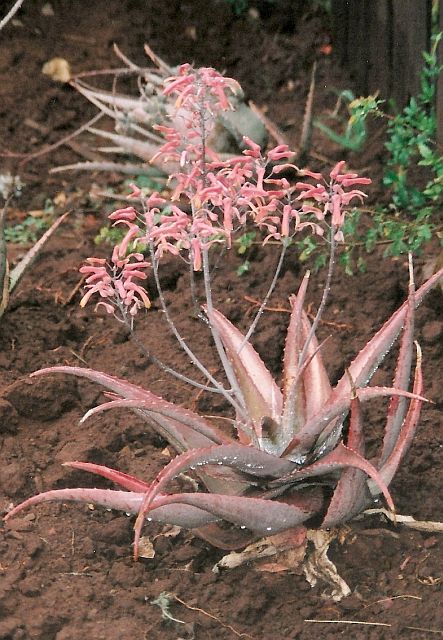 Description
Plants are stemless even in mature specimens, many suckers are produced. Aloe chabaudii has neat rosettes and it will form clumps as it matures. Leaves are white spotted on both surfaces in young plants while mature plants are without spots, although faint lines may be present. Leaves are dull green in colour and the margins are armed with short, evenly-spaced, firm white teeth.
Inflorescences are complex with many head-shaped racemes. Flowers are red or pinkish in colour. Flowers during June and July.

Distribution
Aloe chabuadii can be found in the Northern Province, Mpumalanga and KwaZulu-Natal provinces of South Africa. It extends into Tanzania, Malawi, Zambia, Zimbabwe and Swaziland.
Top 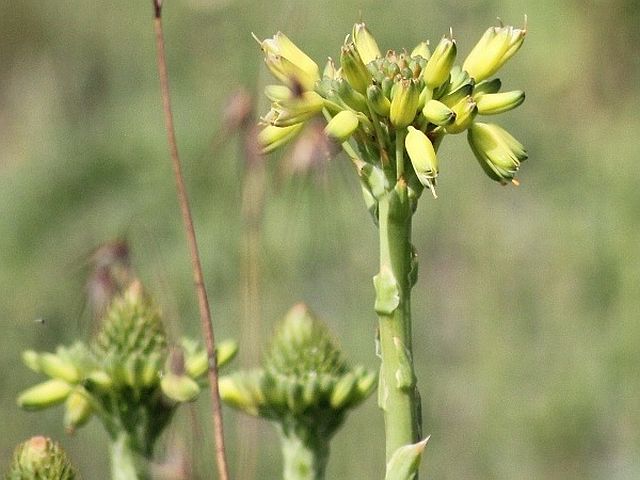 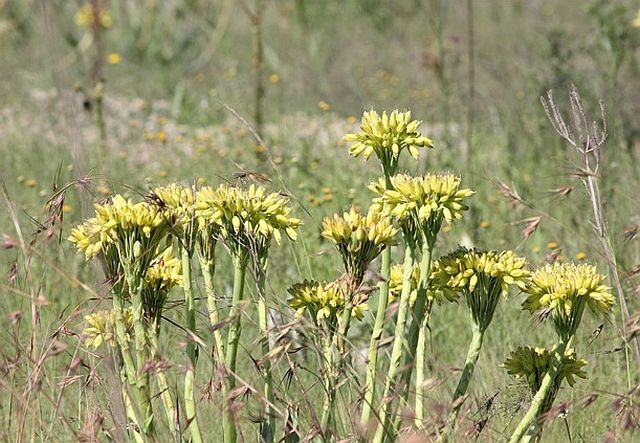 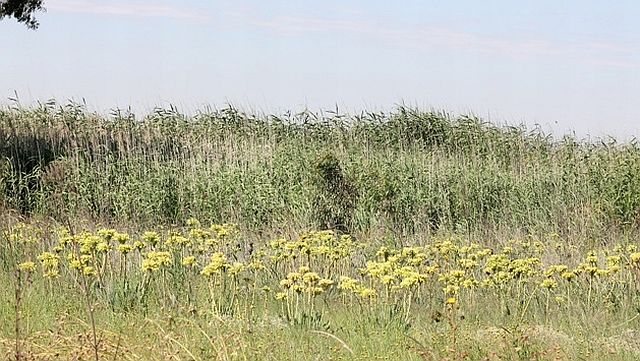 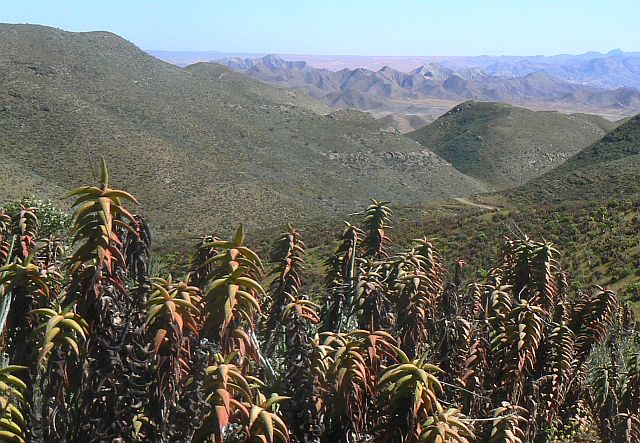 Description
Plants grow as large, much-branched shrubs of up to 2 m in diameter. Branching takes place from the base of the stems or higher up. The stems are erect and carry leaves for most of their length. Leaves are triangular and dull bluish-green and grow with four leaves per layer. The leaves often turn red, especially in times of drought. The inflorescence is often branched low down into two or three head-shaped racemes. Flower colour is varied from red, yellow and red-yellow. Aloe pearsonii is summer flowering (Dec.-Jan.). As with other aloes, the seeds are typically winged, small, up to 4 mm and produced in abundance inside the fruit capsules that split into three when ripe. Seeds ripen soon as a result of the extreme heat, normally around February to March.

Distribution
A rather rare shrub, the Pearson's Aloe is endemic to Helskloof in the Richtersveld National Park and adjacent mountains across the Orange River in Namibia.

Habitat
Aloe pearsonii seems to prefer slopes, hills and plateaus of the arid landscapes in the Richtersveld and surrounds. It grows in high, rocky places which are extremely arid. The summer temperature often exceeds 38 C. Aloe pearsonii occurs in a winter rainfall area (100 mm). 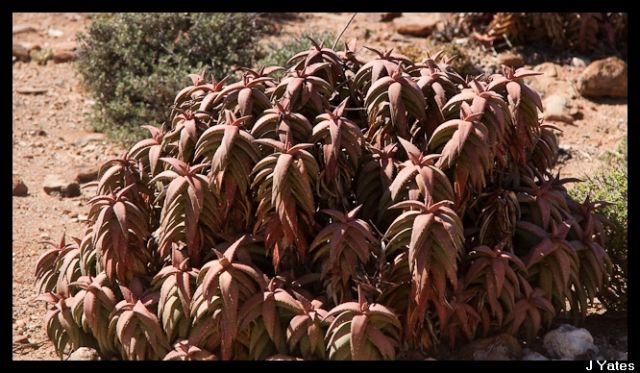 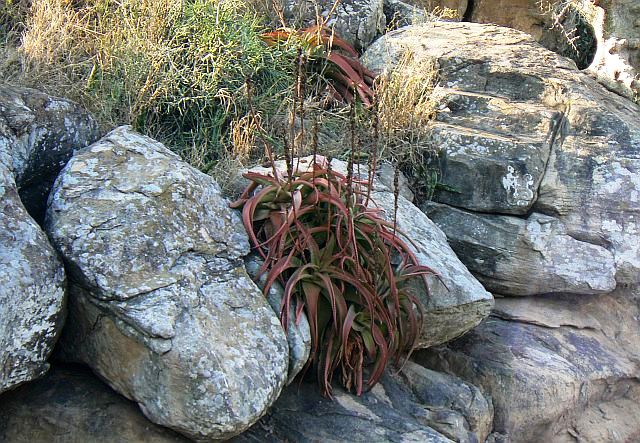 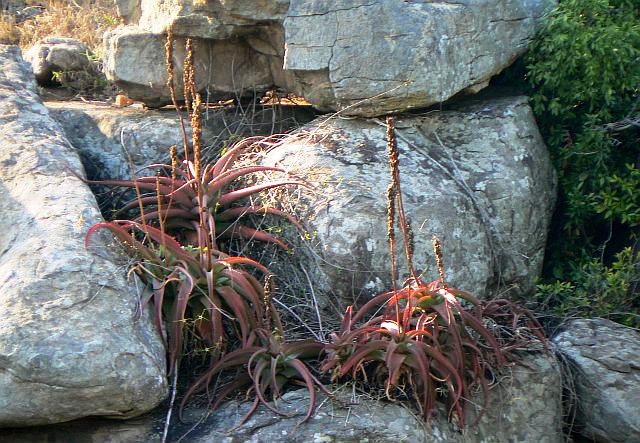 Description
This little species grows to about 1 m and sends out its whorl of leaves from ground level. Grows In dense groups. Usually stemless or with a short stem. The stems divide at ground level into multiplying clusters of rosettes. The leaves are up to 80 cm long and 12 cm to 15 cm broad, lanceolate, long-attenuate. The slender, channelled, recurving and sideways twisted leaves are red in exposed areas, greener in shade; fine teeth on the leaf margins only. Inflorescence 1 m high. Two or three cone-shaped racemes per inflorescence; usually yellow, orange or red flowers are found; winter to spring.