With only 4 sleepies (ja, right - sleep...) to go it's time to start writing therapy again to manage that excitement that is creeping up inside me.

A bit of a downer (the second one from the top of those greenies!) is the uncertainty about the German flight controllers and whether
they will go on a full-blown strike or not. If they do, we might not be able to leave this country as planned. :-o

Well, time will tell, but patience never was one of my virtues...

... and of caracal and honey badgers sightings.

Sorry, no pics to colour that dream. Need to go out and find them first.
Top

fc, Ronnie, Katja, lq, JN - thank you for all your wonderful wishes and also for keeping your fingers crossed for me.

Lismod - don't make any plans for Friday and for Saturday. Uhm, and Sunday neither. You need to take into account
that you gotta fly back again after dropping off Spots and me.

Now the next c**p happened: Last night when I got up from my desk my sciatica started to play up.
Got a physio at 5 to sort it... Can't even imagine how Spots will carry all those bags and suitcases on Friday.

Should that body ruin of mine be sorted again there is still the looming strike.
More negotions between union and employers tomorrow.
If negative the flight controllers will definitely go on strike on Thursday.
Top

Lisbeth wrote:They might strike only on thursday, but with the passengers from thursday having to leave on friday.... :( Has the strike already been announced to the authorities? In order to be a legal strike it has to be announced a week ahead.........I think

Otherwise you hit the nail on the head. I'm selfish enough to have wanted them to go on strike tomorrow.

But hey, all is not lost yet. Will have to wait until tomorrow to find out more. :roll:

Thanks for the first and :lol: about the second!

Katja, I remember how you were left in the dark just before you were due to leave.
I'm feeling better, thanks. But nowhere near that I can fathom being able to carry anything heavy...
Top

Strike is off!!!
Back is getting better!!!

But better doesn't mean up to scratch.
I still need a bellgal though, lq. Start clearing your diary!

Thanks to all of you for your kind wishes. You have no idea how much they
mean to me. 48 hours from now I'll be boarding the plane and I firmly believe
that all your crossed fingers made it for me. True story.
Top

We have arrived safely on Jo'burg - completely knackered though...

bobbyb, get ready for climbing aboard tomorrow. Someone has
to keep Popsie on the backseat at bay. And Lismod is right about the
cold ones.

Katja, will see what I can do about the photos.
Top

Flight connection is only tomorrow morning, Lismod.
So for now we are staying in a b&b quite close to the
airport. Gotta get back to OR Tambo by 8.15 am tomorrow.

Katja, I would if I could, but only with a bit of luck,
we'll have cell reception at Kieliekrankie from tomorrow onwards
until the 19th. Then we are leaving for Nossob and there is definitely
only the webcam to communicate. If it is up...
Top

lion queen wrote:Met up with them yesterday morning..............fasten you seat belts this is going to be a stunning TR!!!!

So glad to have met you two and lovely to have had a chat!!!!

Do hope the rest of the trip is as wonderful as the first part!!!

So we’re back again from the magical place in the Kalahari… This trip definitely was different to what we had experienced before… It was mind-blowing! Having said that there were days that felt so slow because what hadn’t been seen by 9am in the morning, wouldn’t show up anymore for the rest of the day. Admittedly, we had great sightings in the wee hours of the morning, but when you’re out and about for 8 hours a day, one hour of excitement in the morning wears off until the end of the day… Our luck changed big time on our first full day in Grootkolk and wouldn’t leave us anymore for the rest of the trip. We got splendid sightings with and without photo proof, but at the end of the day it’s the experience that counts and they are definitely imprinted to our heart and soul…

Another thing that made the trip so different was the kind and amount of game we saw. Whereas the riverbeds were thriving with oryx and hartebeest in April, we got very little of them – especially of the latter – this time around. Regarding raptors we found tons of bateleurs whereas I hadn’t seen a single one in April. The black-shoulder kites riddled the trees instead of the the PCG and tawny eagle were scarce where they had been galore in April. On the smaller birds’ side there were many more compared to our trip earlier this year which makes sense considering we now went in late spring / early summer.

Then the weather – we had any temperature between 3°C , with the temp gauge often rising about 30 degrees within few hours. There where days when we experienced strong winds that would whirl up the sand. The last two days where rather coolish and overcast with the odd raindrop falling.

What made the trip also special was the outstanding friendliness and helpfulness of the Saffies! We had a minor glitch with the plug of our fridge/freezer and when we noticed that at Mata-Mata petrol station a friendly guy offered to fix it for us. It involved some welding needed to be done, so he offered quite a bit of his time to help us. Thanks for that, Brian. We were also lucky enough to meet him and his wife Beth again on several occasions in Nossob and Grootkolk and had very interesting and entertaining chat with the both of them. It was a great pleasure meeting you, Beth and Brian!

Also, there was a dad and son travelling together who offered me to boil my water kettle at their unit when our gas had run out throughout the night in Kieliekrankie. Unfortunately I never asked their names, but thank you guys for your kindness and the vivid chat we had while waiting for my water to get going!

We met lots of people from the lapa side as well and... Wait for it...

While we were standing at a special sighting a car pulled up next to us. We thought the people inside might want to know what we were looking at, but when I rolled the window down, I was greeted by „So, you’re Mel.“ Not a question, but a statement. It was lion queen who knew what kind of car we would be driving in the car as she is well aquainted to our car rental guy. Although we didn’t have the time to talk at length it was very nice finally meeting you, lq after all the advice and help I received from you towards our trip. Thanks for that!

I’ll do this trip report a bit differently in categories of critters that we saw and will fill in with short or sometimes maybe longer accounts of encounters that went unphotographed. Although it’ll take a bit of time before I can get started for real. So bear with me, please.
Top

Raptors and other big birds

At the southern entrance of the 14th borehole loop we found a huge weaver nest with an equally huge hole in it as indicated to us.
It was the home of a barn owl and its chicks. Alas, we never saw the chicks, but at least mum said hi. 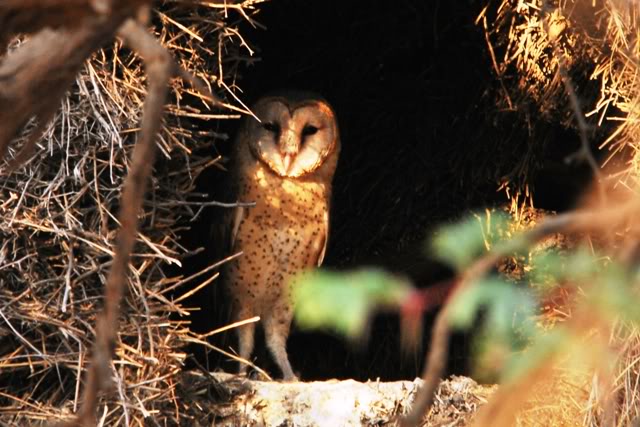 Especially on the Aoub side the trees were riddled with vultures, and this Cape vulture (at least this is what I think it is) was close enough to get a halfway decent shot. 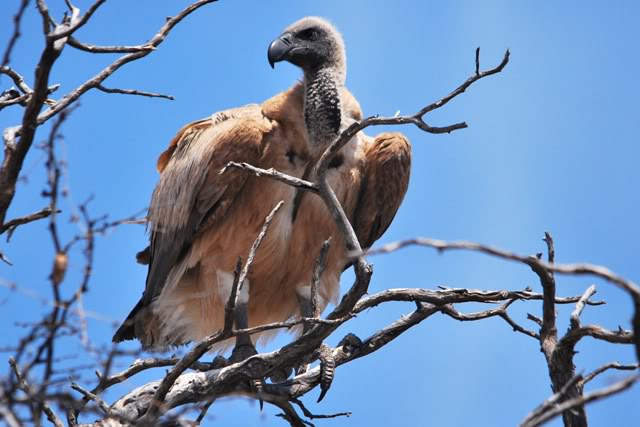 Then the PCG that were around, but not as plentisome as in April. 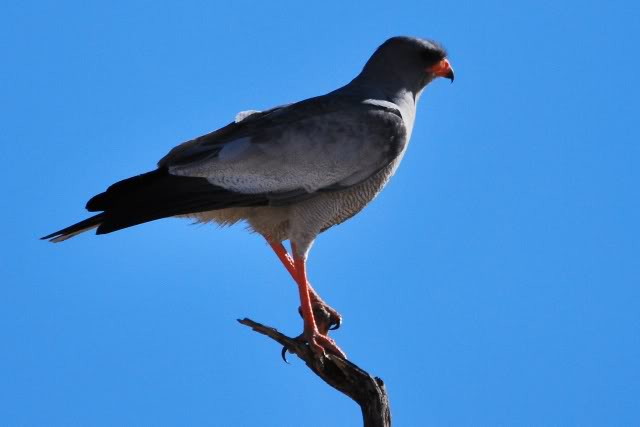 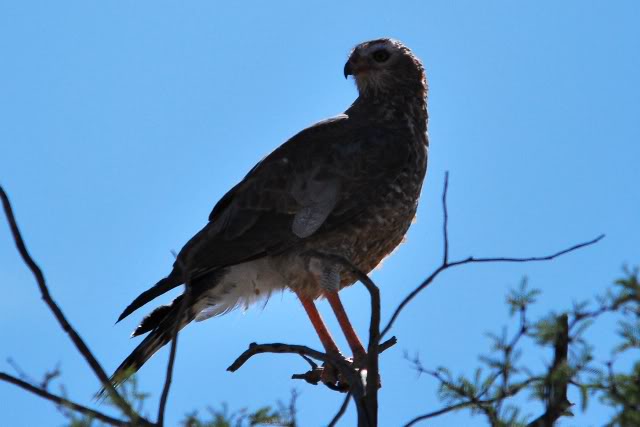 Instead of all the PCG we found tons of black-shoulder kites. There were so many that at some point we didn’t bother to stop anymore unless the light was extremely favourable or they were very close. 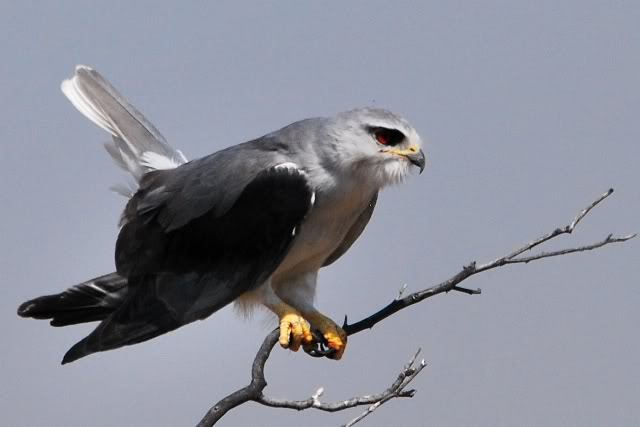 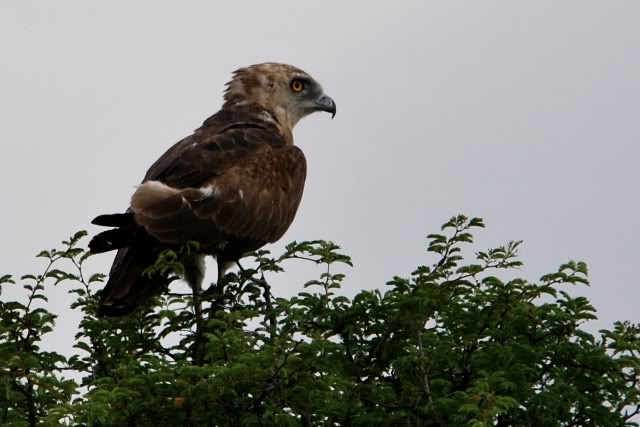 Then a gabar goshawk: 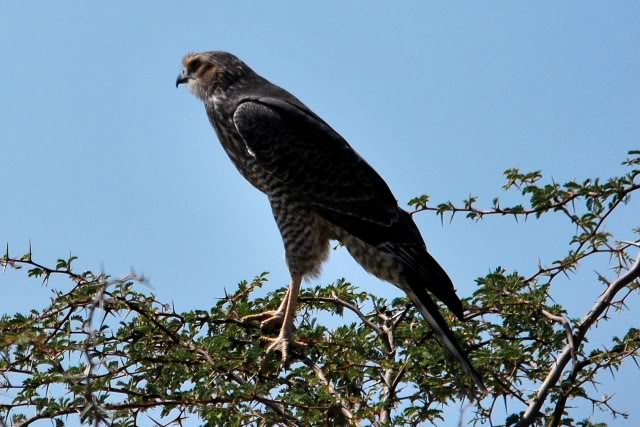 And the grown-up version of it: 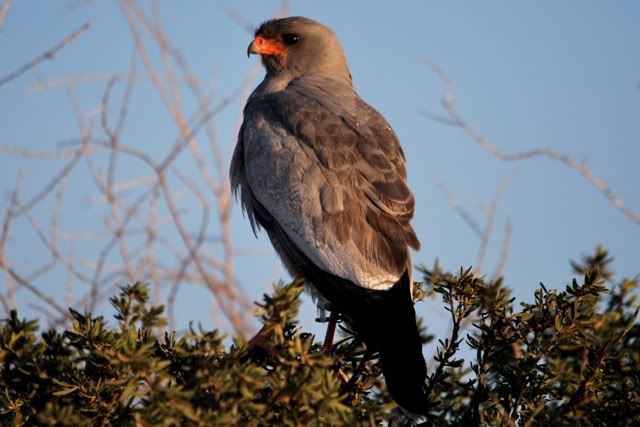 At Urikaruus we had a greater kestrel at the waterhole. 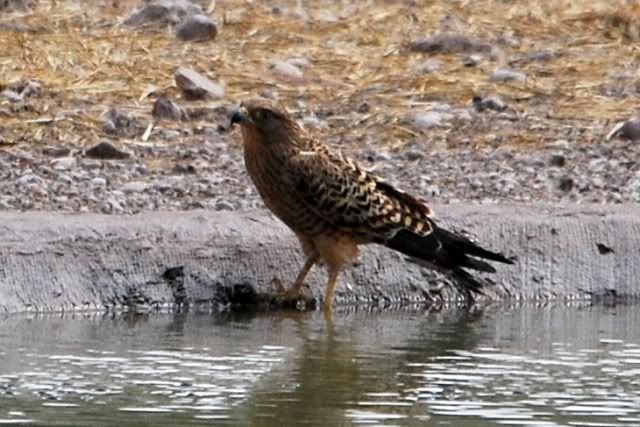 And my three favourite pics of ostriches from this trip: 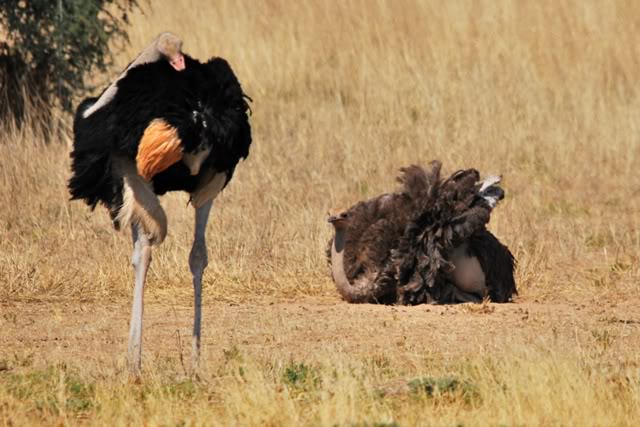 Spa treatment at the 14th borehole. 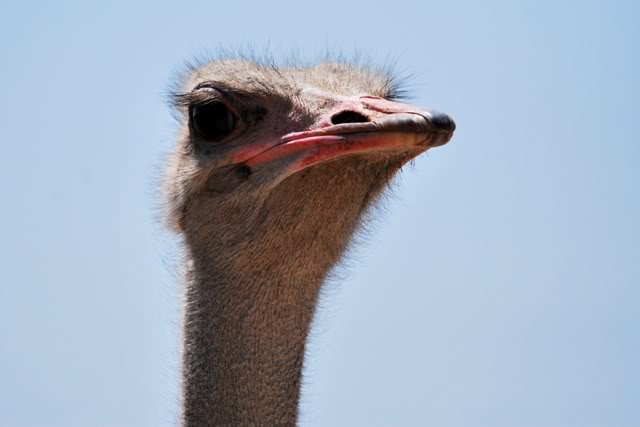 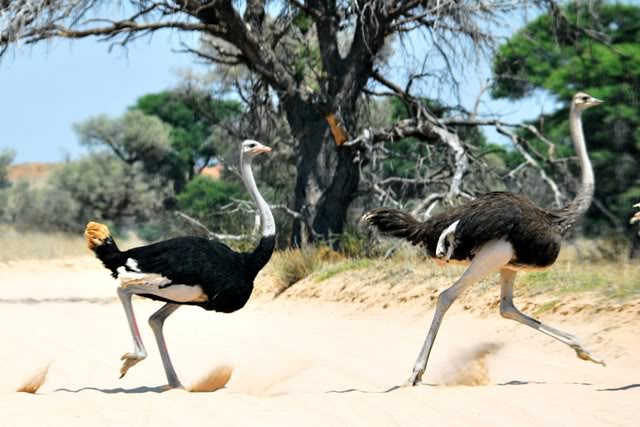 And those with not enough courage to wait it out what we were doing.
Top

One of the most thrilling encounters certainly was with a bunch of raptors at Grootkolk waterhole. We had missed the lions in the camp earlier that day as we had gone out for a drive. Because of that we didn’t dare to take our well deserved midday nap at the same time. So I told Spots to go ahead, I would be womanning the waterhole and rudely awake him in case that the cats returned. Well, they didn’t. But the show I was able to watch over the course of three hours was just amazing. Around 1.30 pm a martial eagle landed in the tree next to the waterhole and about 15 minutes later he graced me with his presence at the waterhole where he stayed on for the next 3 hours. 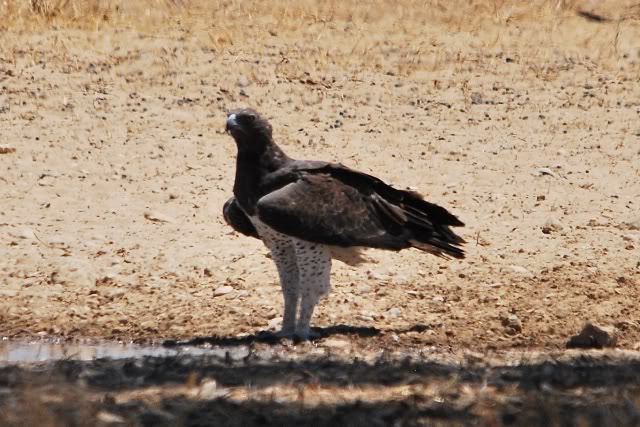 While he was sitting there I noticed movement in the air. Binocs out and … Bateleur! One after the other appeared and all of a sudden there were three of them circling in the sky. But they vanished behind the dunes. But what was that??? More mayhem above and again – bateleurs. Probably just two of the three having returned unnoticed from behind the dunes. The first one landed. 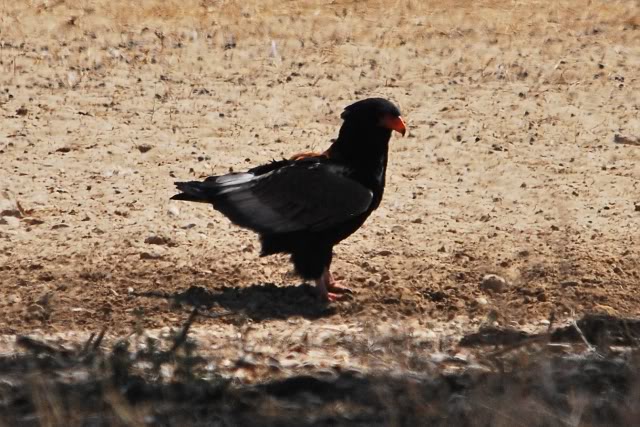 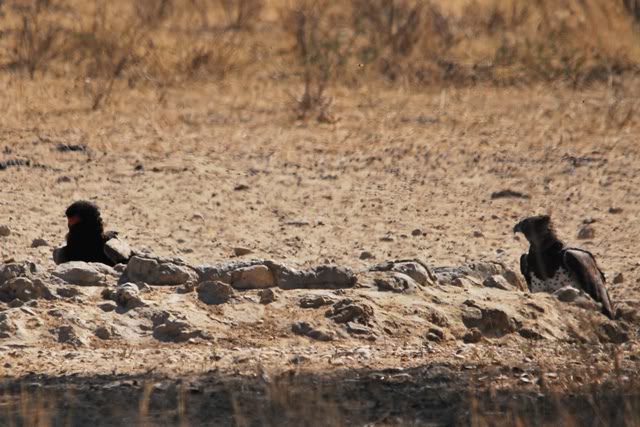 And now there were still three in the sky. Okay, so four in total, methought. Then a juvenile landed. Oh, no, hang on, that’s a tawny. 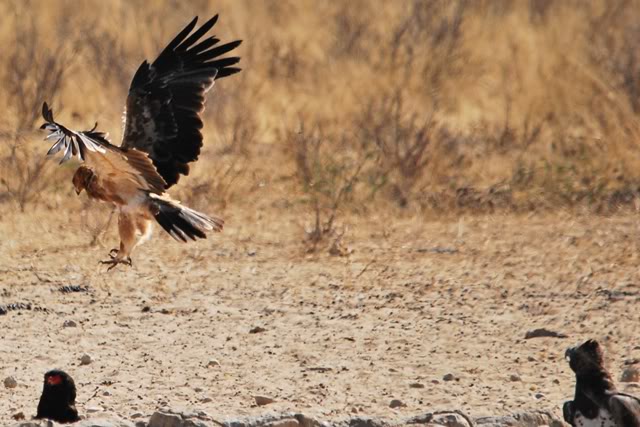 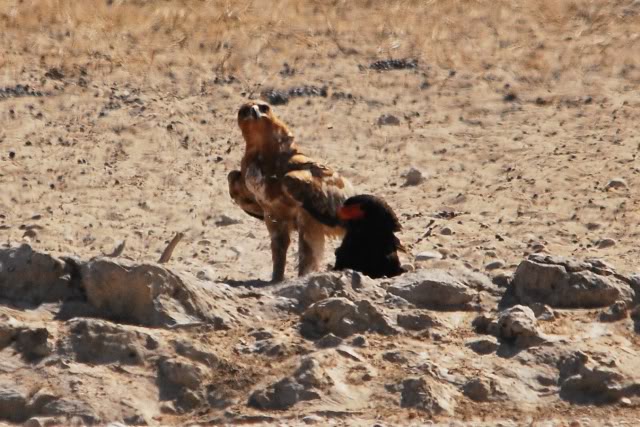 But Mr. Tawny didn’t seem to feel comfortable in the presence of two other raptors and quickly made his exit again.

Another raptor grounded at the waterhole. Right, this time it was a juvenile bateleur. 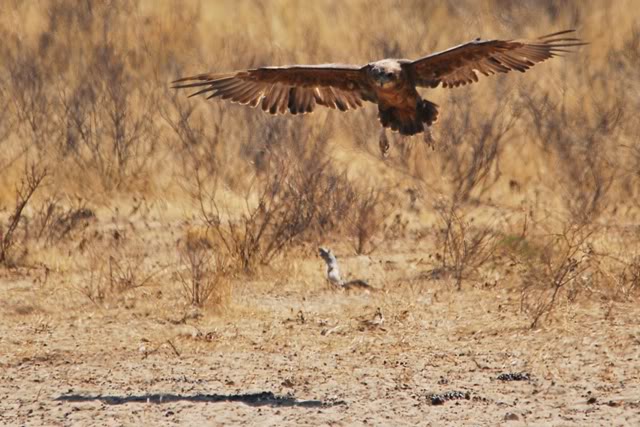 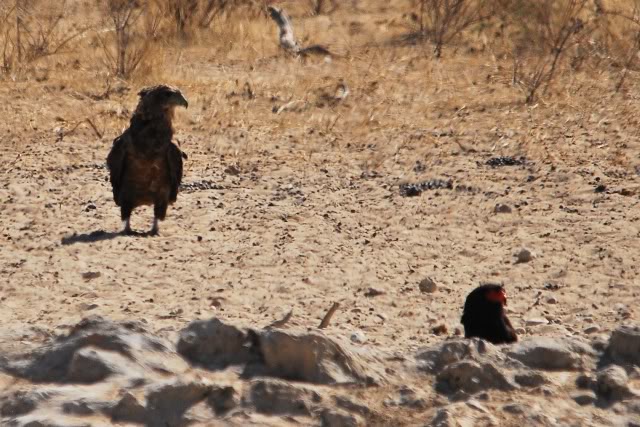 Heck, there are still three other bateleur in the sky! The next one landed as well, but took of rather soon again. Then another one stopped by and now there were 2 adults and 1 juvenile bateleur sitting at the waterhole and the martial also at the other end.

Checking the sky again – there were still 4 other bateleur flying there making it a total of 7 of those majestic raptors seen at the same time. What a stroke of luck. I had never seen so many at the same time!
The martial got intimidated by the arrival of a secretary bird and hurriedly made his move. Soon the bateleurs followed suit as did the secretary after seemingly having successfully defended his territory.

The day before a cape vulture had visited the waterhole while a second one kept its distance and stayed up in the sky. 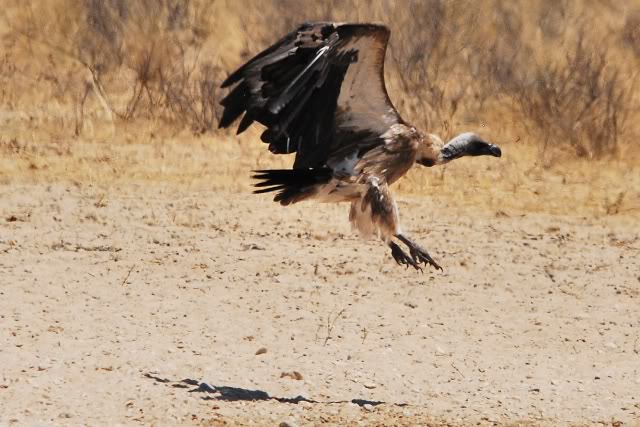 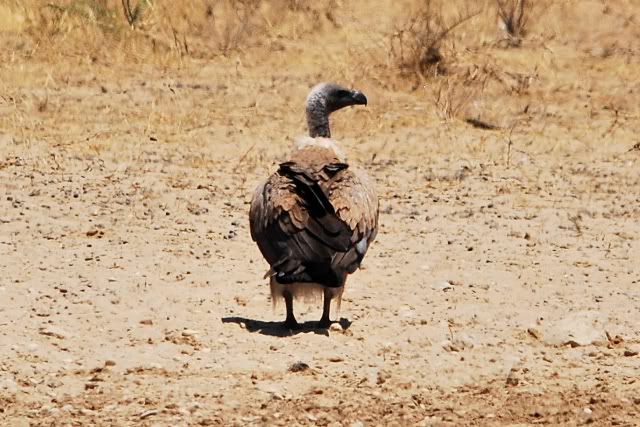 More GK birdies to come at some other point throughout my TR!
Top
29 posts