South African National Parks (SANParks) is extremely disappointed in an article published by Beeld on Monday 30 April 2012 in which unfounded allegations of tension between SANParks Rangers, South African Police (SAPS) Special Tasks Force and the South African National Defense Force (SANDF) were made. The allegations were made on the basis of a faceless so-called “sources” which relates to a shooting incident in the Kruger National Park (KNP) between a SANParks Ranger and SAPS Special Task force member in which both lost their lives.

Articles such as this one undermine the fight against rhino poaching in SANParks and South Africa as a whole. SANParks together with SAPS Special Task Force and SANDF have created a National Joints Operation team which has been effective in fighting poaching. This joint platform ensures operational effectiveness, safety and addresses any areas of mutual concern. The effectiveness of this structure is clearly evident in the number of joint operations carried out and successes achieved so far.

“SANParks wishes to put it on record that we have developed an excellent working relationship with both SAPS and the SANDF in the fight against rhino poaching. The teams working together have developed a winning combination, they have integrated well and they complement each other,” said Paul Daphne, Acting Head Communications, SANParks. “As a result of the combined effort 30 suspected armed poachers have been arrested in the KNP in 2012.”

It is worrying that Beeld continues to use dubious sources as fact. “This speaks directly to the integrity of the publication while the specific allegations in the article are sowing division and mutual distrust which could create tension and hamper the achievement of our common goal – defeating rhino poaching.”

Daphne said, “The forces are working well together and they are all saddened by the tragedy. An inquest has been opened to get to the bottom of the matter. It is therefore irresponsible of Beeld to start an unnecessary ‘gossip corner’ when families have lost their loved ones.”

I am not going to comment on the shooting incident because I have seen first hand how things can go pear shaped when people are under fire and until the inquest results are released there is absolutely no point in even trying to guess what happened. However I can not stop myself from commenting on the absolute drivel sprouted by members of SanParks management in their response to Beeld.

1) SANParks together with SAPS Special Task Force and SANDF have created a National Joints Operation team which has been effective in fighting poaching.

2) The effectiveness of this structure is clearly evident in the number of joint operations carried out and successes achieved so far.

3) The teams working together have developed a winning combination

Excuse me SanParks, but the scoreboard shows that you are not being effective nor winning the fight against Rhino poaching. The scoreboard shows the exact opposite. The fact that the DEA has to communicate your failures does not absolve you of the fact that you are pulling at straws and trying to convince yourselves and the public that you are making headway. Some arrests have been made I grant you, and well done, but the scoreboard shows that they make no difference to the pace at which our Rhinos in Kruger are being slaughtered. I have truly had enough of you passing the buck and not facing up to your own ineptitude at taking a good hard look at yourselves. You have some good honest rangers out there putting their lives on the line, but because of your lack of commitment to clear up issues of shocking management, you are an insult to their commitment.
1)The security at most of your gates is a joke.
2)Clear the staff villages of all non staff personnel
3) Enforce the rule of absolutely no vehicle movement anywhere in the park after gate closing times
4) Equip your rangers with effective tools (such as radios) to fight the battle, install tracking devises in your vehicles and if the budget is not there, cut your own bonuses and extravagant salaries
5)Take ownership of the scourge, don't pass on the responsibility to the DEA, you are the custodians of our Rhino
6)Swallow your pride and ask for effective help from the public, not just some pathetic requests for the public to report suspicious stuff. We want to get a lot more involved than that.
7) Those staff members that are totally incompetent at their jobs and show no commitment to doing the job right are just freeloaders and are probably not concerned about the poaching problem at all, in fact would not think twice of aiding and abetting poachers.....get rid of them
8) Instill a value of discipline all the way from the very top down to the lowliest ranks, (you just don't dry biltong on camp fences)
9) Realise that conservation is a calling, not a job and similarly flies in the face of commercialization.
10) Be honest with yourselves, your staff and the public.

Get these 10 commandments right and I for one will literally stick my neck out to support you in anyway that you ask. Continue the way you are and I have a duty to call for you to step down and let someone that can do the job take over.
Top

An inquest docket has been opened due to the mysterious circumstances surrounding the incident.

SKUKUZA - A policeman
and a game ranger were killed in mysterious circumstances during a shoot-out in the Kruger National Park (KNP) this weekend.

They were apparently taking part in Operation Rhino - a highly successful initiative which has resulted in several rhino poachers being arrested or killed. Specially trained policemen, soldiers of the South African National Defence Force (SANDF) and game rangers took part in the operation.

However, during a dramatic turn of events on Saturday morning, two of these law enforcers were killed. This was the first time that a policeman and ranger were killed while on the hunt for potential poachers.

Details are sketchy at this stage and even informed sources are keeping mum about what happened.

Col Vish Naidoo, police spokesman, said in a statement that a police official and SANDF member were conducting a search for potential poachers in the Tshokwane section of the KNP at 09:00 that day.

"They came under fire. The shooting resulted in the policeman being shot and killed. In return, the defence force member fatally wounded the shooter. It later emerged that the latter was in fact an on-duty SANParks game ranger," he said.

Naidoo would not release the name of the deceased police official. He was only willing to add that an inquest docket had been opened to determine the circumstances and cause of the incident. The story made headlines in other media yesterday and Naidoo said that some of the content was distorted and based on fabrication.

Mr William Mabasa, spokesman for the KNP, said that no fresh carcasses were found over the past weekend which could be linked to the shooting.

"These people were not poachers but security personnel who came from different bases to follow up on the same case. What happened was an accident. We will not release the name of the ranger until we have met with his family on Tuesday," he concluded.

Herewith the Beeld Article in Afrikaans:

Basically the same story, except that the "source" adds that dogs are even being used to hunt the poachers, that the different groups are being thrown together and don't trust each other, and that they need to wear the same uniform.
Top

Headline Story in Phalaborwa Herald 25 May 2012

Maybe we should be upset with SANParks' allegations!!! 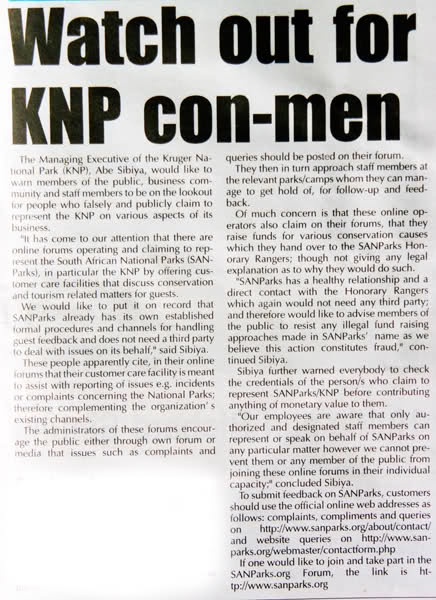