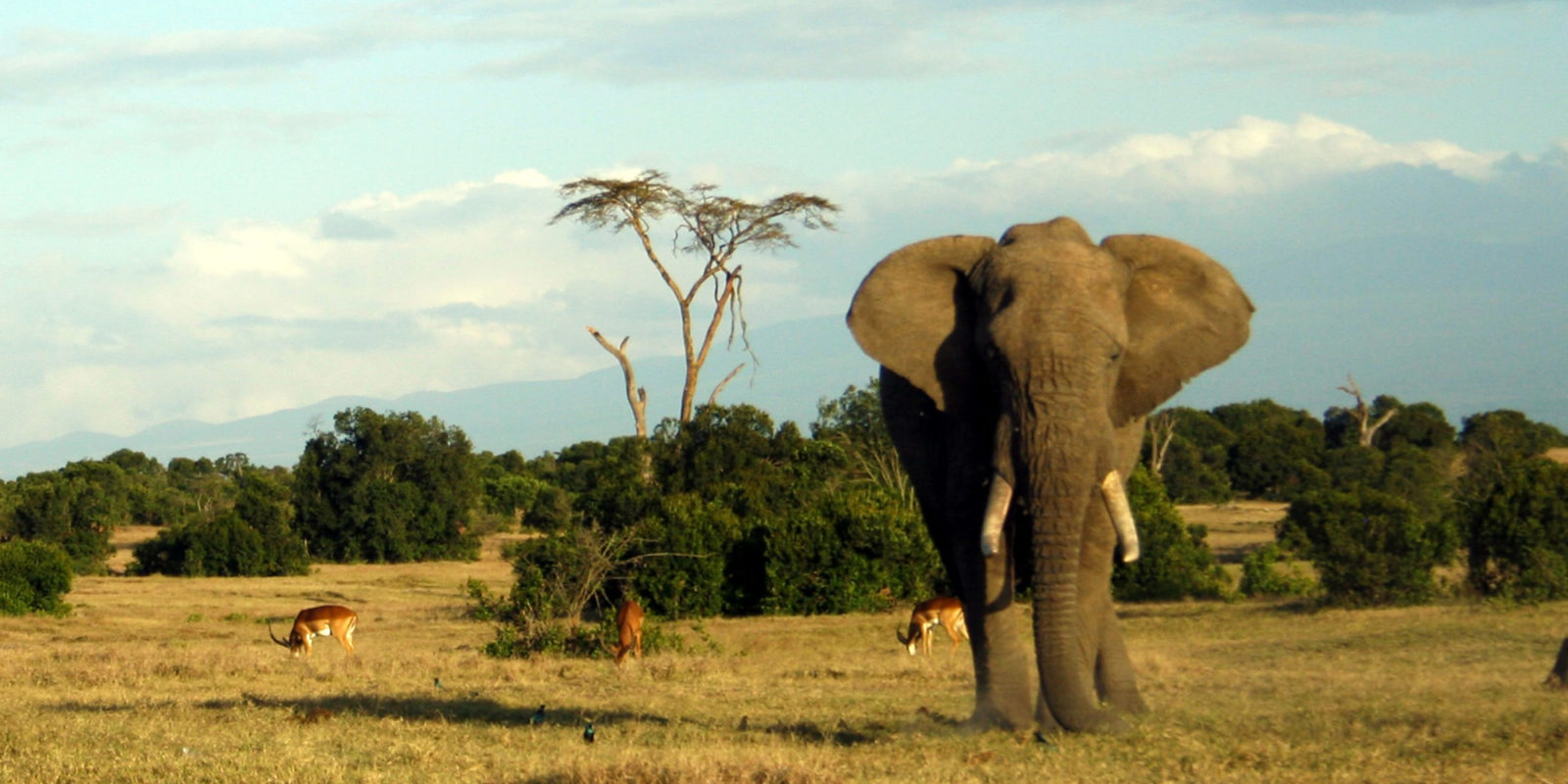 An international conference of elephant experts has condemned the capture and confinement of elephants and has called on zoos to release and reintegrate them into the wild or relocate them to sanctuaries where they can live a more normal life.

Holding elephants in captivity causes them enormous stress and constitutes cruelty. Capturing wild elephants and removing them from their families is unacceptable. Captivity is simply unsuitable for elephants.

This was the overall agreement at a conference in Hermanus on 6 September 2019 attended by elephant specialists from Kenya, Zimbabwe, the United States, Great Britain, the Netherlands and South Africa. They were seeking to work out a framework and policy guidelines for dealing with elephants in captivity.

The conference, Taking the Elephant out of the Room, was organised by the EMS Foundation and followed the historic ruling by the United Nations wildlife trade organisation, CITES, prohibiting wild-caught elephants from being held in captive facilities.

The conference was opened by Chief Steven Fritz of the Khoi Council.

“Elephants are sacred to the Khoisan First Nation people,” Fritz told delegates. “What you do to them you do to us. If you enslave elephants you enslave the Khoisan nation. Like us, they are First Nations. They’re our rainmakers and have been with us from before memory. For this reason my people have resolved to unite to protect them from cruelty and killing.”

“In a single day, an elephant may socialise with hundreds of individuals. Relationships radiate out from a mother-offspring bond through families, clans, subpopulations. Independent males form long-term friendships.

“Elephants communicate through more than 300 gestures, complex speech and glandular secretions. They contemplate, negotiate, collaborate, plan and are aware of death. They care about their lives and are more like us than we realise.

“What happens when we remove all intellectual stimulation? In confinement, without companions, an elephant has no purpose. Captive elephants lack the very foundation of elephant life. It is utterly wrong to confine them.”

Biologist Dr Keith Lindsay, whose conservation work began in Amboseli in 1977, outlined the centrality of elephants in ecosystem health.

“They’re a keystone species, essential components in an ecosystem. If you take the keystone out of an arch it collapses. They’re ecological engineers upon which many other species depend. They bring down trees to browse level, they open paths in the forest, they find salt licks, they open space for grazers and disperse seeds. The wild is where they belong.”

Advocate Jim Karani of WildlifeDirect in Kenya said the important question is not “can animals reason or talk, but can they suffer?”. Our confinement of elephants shows they can and do.

“There’s a body of research that proves there’s no conservation-education value to the use of elephants in zoos,” he said. “They are miserable and tell us nothing. Their only use is to take a selfie and walk away.

“The law has a duty to protect all sentient beings and in zoos there are serious welfare concerns about the treatment of non-human persons. An animal has a right of protection against needless pain and suffering.

“Confining and isolating an elephant is not the way to treat a sentient being. They’re not merely property. They should be granted rights as legal non-human persons, as corporations are.”

Marion Garai of the Elephant Specialist Advisory Group provided the statistics. There are presently 1,770 elephants worldwide in captive facilities, of which 1,491 are in zoos. Most of these are in the United States, followed by China, Germany and Japan. Just under 100 facilities hold a single, lonely elephant.

Several speakers detailed the extreme stress caused to elephants by capture and confinement.

Audrey Delsink of Humane Society International-Africa said capturing baby elephants – as Zimbabwe continues to do – causes post-traumatic stress disorder (PTSD) that can last decades. This was confirmed by Dr Gay Bradshaw of the Kerulus Centre for Nonviolence in the United States, whose work has led to the field of trans-species psychology.

“There is an epidemic of PTSD among elephants in captivity,” she said. “Elephants share with humans the same brain, same consciousness and the same vulnerability to trauma. They can experience psychological and social breakdown. Trauma spreads from parent to child, neighbour to neighbour.

“If we ‘save’ elephants from extinction by confining them, they will be elephants in body only but psychologically extinct. We have to end killing and captivity and restore ancestral habitats. That holds true for all wildlife on every continent and in every ocean.”

“All this causes trauma and impacts on their welfare. The less people have to do with elephants the better it is for elephants. But there’s almost no place left on Earth for this to happen.

“In captivity elephants are less aware, they move slowly, they seem to droop. If you’ve worked with elephants you can see their depression, their sadness. So we have to work out our future relationship with elephants very carefully.”

Lynn James of SPCA Zimbabwe and environmental lawyer Lenin Chisaira outlined the traumatic impact of the live capture of baby elephants in Zimbabwe. Adults are driven off by helicopter and the exhausted babies grabbed and bundled into trucks for export, mainly to Dubai and China. They showed heartbreaking undercover footage of terrified youngsters being pushed and kicked to “move up” while loading into trucks.

Professor David Bilchitz of Animal Law Reform SA explored the legal perspective of South Africa’s engagement with elephants. He noted that the way sustainable use of wildlife was used in South Africa was to focus on the species as a whole and allow for the sacrifice of many individuals. This allows individuals to be objectified and exploited rather than respected and well stewarded.

“Trophy hunters, for example, would say it works to the benefit of the whole by bringing in revenue to conserve the species. However, can we justify serious harm for the individual animal for the greater good?

“An integrative approach would reject the view that this advances conservation. It would argue that respect for individuals advances their conservation.

“I would adopt this position as this is the only approach that ensures the long-term goals of both positions. Only our respect for animals will ensure their long-term survival.”

Elephant researcher Antoinette van de Water has been working on the value of elephants in society and searching for the narratives needed to make them more important in order to change exploitative practices.

“We have to find goals that are good for both humans and elephants. What are the drivers of peaceful coexistence? In this, cultural values are important and we must work with affected communities whose problems get heard. Putting a price tag on elephants is not the way.”

Kahindi Lekalhaile of the African Network for Animal Welfare insisted that captivity of elephants was not a method of conservation. Captivity isn’t just about space, he said. It denies them social interaction and that is a great injustice.

“Because elephants in zoos do not live long, however, there is a constant demand for replacements from the wild. This is a threat to wild populations.

“Worldwide, most captive elephants are still wild-caught. We can look into artificial insemination,” he said. “But capturing young elephants for export to zoos should never happen. There should be no international movement of elephants.

“But what do we actually do about elephants who are already in captivity? We should think deeply about releasing them into the wild. Where are these wilds? They are diminishing. And should we be releasing traumatised elephants? Let’s keep them in natural sanctuaries.”

Brett Mitchell of the Elephant Reintegration Trust outlined the steps necessary to integrate captive elephants into the wild, a process, he said, that can take many years. For a few deeply traumatised elephants it may not be possible. But he mentioned a group of elephants which were released from a holding boma into the wild that never went back, not once.

A policy framework will be developed from the conference inputs and discussion. DM

The conference was live-streamed and can be viewed here:

https://www.dailymaverick.co.za/article ... 0captivity
"Education is the most powerful weapon which you can use to change the world." Nelson Mandela
The desire for equality must never exceed the demands of knowledge
Top

When Fabio and I were in India we went to a so-called Elephant Sanctuary where elephants were supposed to enjoy life after having been working for years. All the elephants were kept in chains! Other than "Sanctuary" and when we said that we wanted to go away right away because those were not elephants "enjoying" their pension, they were elephants in chains, nobody understood what we were talking about

Obviously the concept of animals having feelings and are born to be free, has not as yet entered in the mentality in developing countries.
"Education is the most powerful weapon which you can use to change the world." Nelson Mandela
The desire for equality must never exceed the demands of knowledge
Top

In Denmark, wild animals are now going to be forbidden in circuses

NGOs say they are 'pleased' with the decision taken in Geneva by the regulator of global wildlife trade to impose a near-total ban on sending African elephants captured from the wild to zoos.
"Education is the most powerful weapon which you can use to change the world." Nelson Mandela
The desire for equality must never exceed the demands of knowledge
Top
5 posts • Page 1 of 1