Tucked away on the Atlantic coast in the far northwest corner of South Africa, the Richtersveld’s northern and eastern borders are defined by the “big bend” of the Orange River ( also known as the Gariep, which means ‘Great River” in the Nama language). Its western perimeter lies on the desolated Atlantic shores, which are flanked by the freezing waters of the Benguela Current. Its southern border roughly follows the road linking Port Nolloth on the coast to Steinkopf, which is about 60 kilometers north of the nearest important town of Springbok. 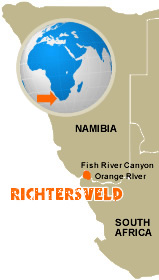 Proclaimed in 1991 after 18 years of negotiation between the National Park Board and the local Nama people, Richtersveld National Park is now managed jointly by the local Nama people and SANParks. The Nama people, who lease the land to the board, continue to live and graze their livestock in the area. This is a harsh and unpredictable land where water is scarce and life-sustaining moisture appears in the form of an early-morning fog called Malmokkies. It rolls in from the Atlantic, sustaining a remarkable range of small reptiles, birdlife and South African wildlife.

The Richtersveld National Park is home to grey rhebok, Duiker, steenbok, klipspringer, kudu, Hartman’s mountain zebra, baboon, vervet monkey, caracal and leopard. Birdlife is prolific, and 650 plant species have been recorded (the Nama community have specific uses for some 150 of these species, ranging from medicinal and cosmetic to nutritional). Also peculiar to the Richtersveld is the world’s largest diversity of succulents, including the unusual halfmens, a tall succulent plant that bears an uncanny resemblance to the human from when seen outlined against the sky.

The Gariep River which forms the northern border of the Richtersveld National Park is virtually the only standing water in this whole vast region and the rocks are stark and bare - in some places resembling a barren lunar landscape. The palate of colours that meets your eyes travels through the full range of gold and yellows to pinks and purples and then stuns you with streaks of pure white quartz which is sometimes scattered on the ground like snow. 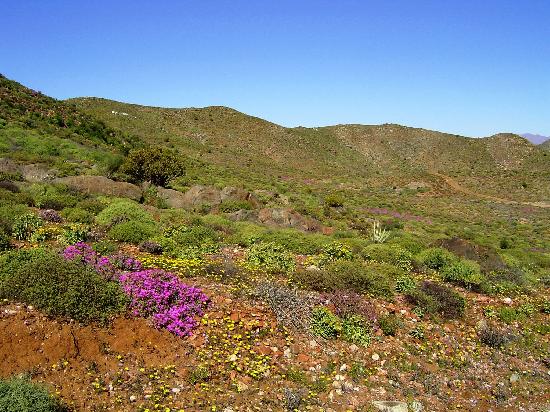 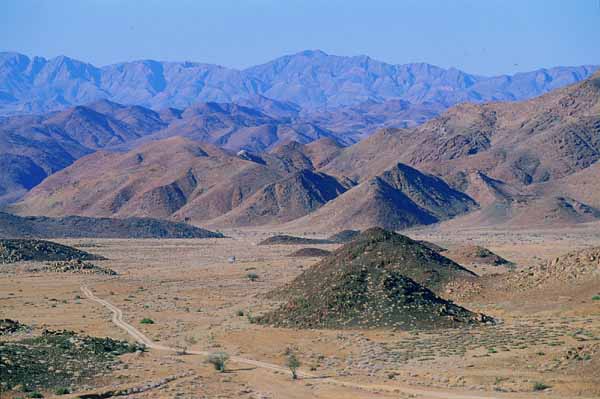 The Richtersveld climate is harsh and dry, with temperatures of up to 53º C having been recorded in mid-summer. Nights are cool and may become chilly in winter. Heavy night-time dew occurs in the park. The Richtersveld National Park is only accessible by means of a 4x4 vehicle, but vehicles with high clearances such as combi's and LDV's do travel in the park. Sedan vehicles are not permitted. Driving in the park at night is also not permitted.

Sendelingsdrift Rest Camp has ten chalets (4 x 4-bed units and 6 x 2-bed units), all with air conditioning, fridge and two plate electric stoves, showers and front porches with views over the Gariep (Orange River). There is a swimming pool in the camp.

Potjiespram Campsite has 18 campsites with ablutions (cold showers) and an Environmental Education Centre where school groups can stay over in traditional Nama huts.

De Hoop Campsite on the Orange River has 12 campsites with ablutions (cold showers).

Richtersburg Campsite lies on the banks of the river, and has 12 campsites with ablutions (cold showers).

Tatasberg and Gannakouriep Wilderness Camps each have four 2-bed self catering units with showers, 12 volt lighting system, fridges and gas stoves (hot and cold water). Should problems occur with the lights, paraffin lanterns are available. A caretaker is resident on site.
Please note that the water at Gannakoeriep and Tatasberg is not suitable for drinking and it is recommended that guests should provide their own drinking water.

Adventure and Outdoor Activities:
Flowering season – between June and October, depending on good rain.
Bird watching – almost 200 species in the park.
Water sports - Canoeing, swimming and rafting in the Orange River.
4 x 4 driving - The park is only accessible by means of a 4x4 vehicle

There are two wilderness camps in the Richtersveld NP.

Tatasberg is overlooking the Orange River and Gannakouriep is in the rocky valley of the Gannkouriep river.
In both camps are 4 two-bed-units for guest and another "chalet" for the camp attendant.

Have a look here: